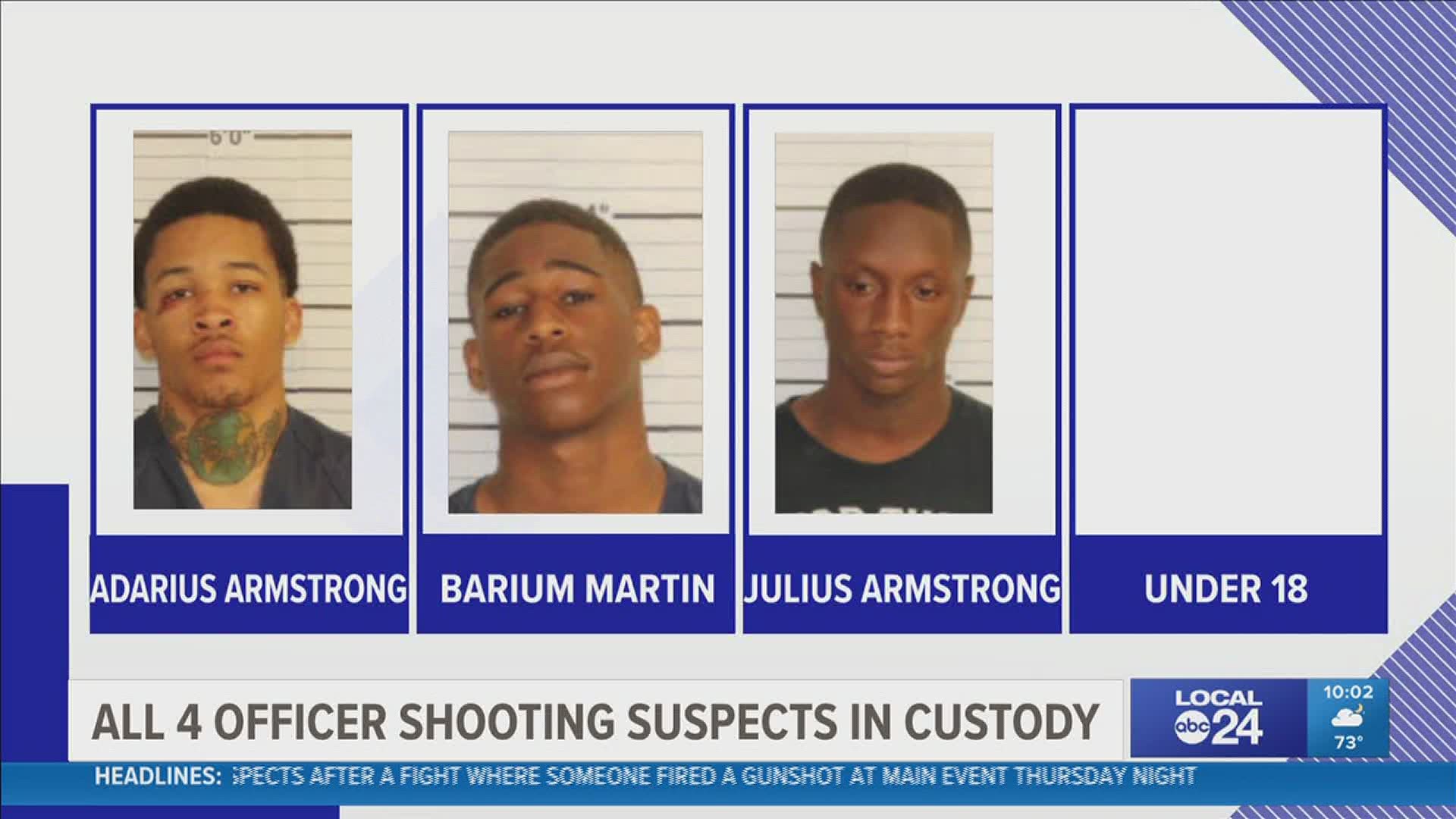 Memphis Police have identified the four suspects accused of shooting at a Memphis Police officer and an ATF Agent in North Memphis Friday afternoon.

Police have charged 19-year-old Adairius Armstrong, 19-year-old Barium Martin and a 17-year-old with two counts of First-Degree Murder and Employment of a Firearm during a dangerous felony.

Officers say Julius has not been charged in this case, but faces charges in another case back in March.

On Friday,  the Violent Crimes Unit were looking for a carjacked vehicle in the area of Alabama and Mosby that was involved in a crash. While searching in the area of Peach and Leath, the suspects got out of a red Sedan shooting multiple shots at officers. The suspects then fled the scene.

Both officers were struck by gunfire. Medics then transported them to the hospital non-life-threatening injuries.

A Memphis Police Officer and an ATF agent are recovering after being shot in north Memphis Friday afternoon. Memphis Police said violent crime unit officers were working on a carjacking that involved a crash when, at Peach and Leath, several suspects got out of a red sedan and fired multiple shots at two officers, and then took off.

MPD said bullet fragments were found in the officer's headrest making it a close call. Both officer and agent are expected to fully recover. According to MPD, neither officer fired shots back. Officers arrested three suspects, but one is still on the run.

Those who live near Leath and Mosby, close to where the shooting happened, said they are worried about safety in their community. Edwin Moore has lived in North Memphis for 20 years and said the suspect needs to be caught.

"They need to hurry up and catch him because he’ll be a threat to everybody out here if he’s on the loose shooting at the police," Moore said.

Moore came home to crime tape covering his street and in disbelief of who was shot.

"It’s something new to me though hearing the police got shot," Moore said.

One neighbor, who wanted to stay anonymous, said she was surprised by the shooting considering the added security in the neighborhood.

"I don’t even know why it happened because there are so many police cameras up over there on the street," the neighbor said. "It’s a police camera so that’s why I’m saying it’s crazy that it happened right there.

Dozens of officers knocked on the doors near the crime scene possibly looking for the suspect or additional witness information. If you have any information, you are urged to call Crimestoppers at 901-528-CASH. 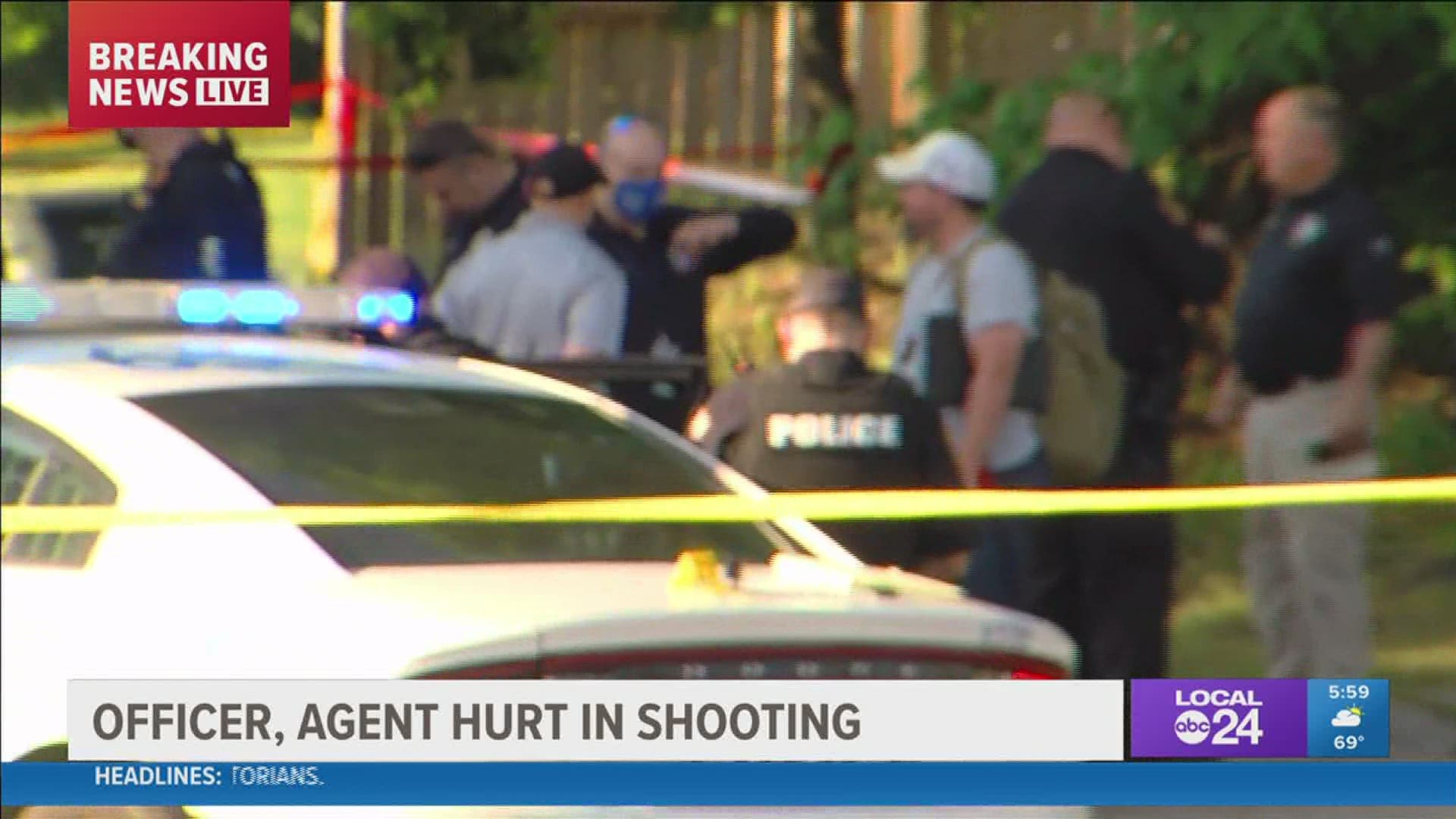 UPDATE: A Memphis Police Officer and an ATF agent are recovering after being shot in north Memphis Friday afternoon.

Memphis Police say violent crime unit officers were working on a carjacking that involved a crash when, at Peach and Leath, several suspects got out of a red sedan and fired multiple shots at two officers and then took off.

A Memphis Police Officer and an ATF agent were shot and taken to the hospital, but they are expected to be ok. Neither officer returned fire. Three suspects are in custody, and officers still are looking for another one.

Congressman Steve Cohen said, “I am concerned about the officers injured in the incident this afternoon but relieved at reports that their injuries are apparently  not life-threatening. Such incidents remind us of the risks our law enforcement officers confront every day when they go to work, to protect and serve. I appreciate the sacrifices they make to keep us all safe, and I wish these two officers a speedy recovery.” 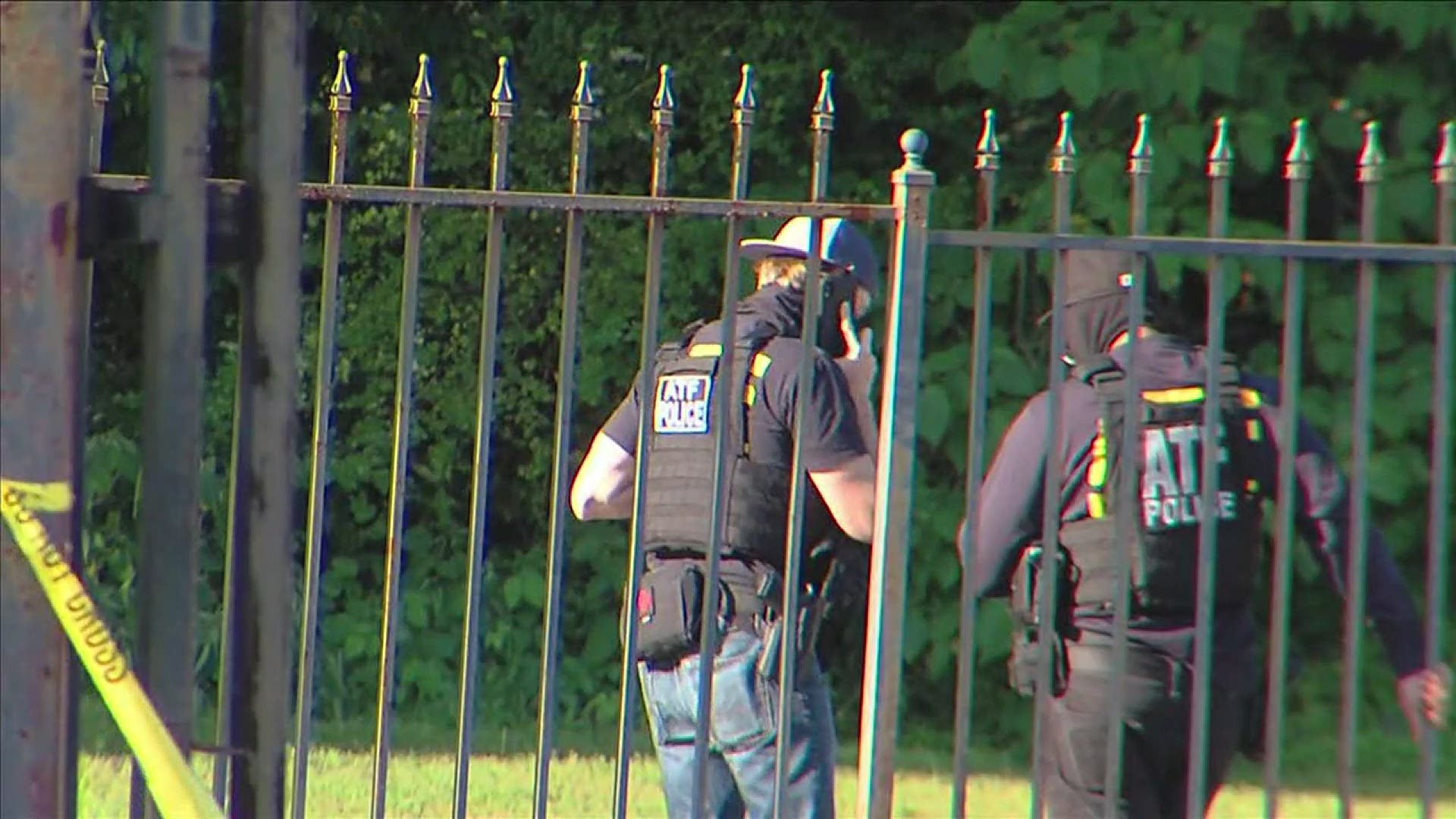 Heavy police presence near Manassas and Mosby in North Memphis.

A neighbor says he heard more than a dozen shots go off around 3pm.

Local 24 News is working on a breaking news story in north Memphis, where a massive police and law enforcement presence can be found.

Authorities are working a “shooting incident” which originally happened at Peach Avenue and Leath Street Friday afternoon, but law enforcement officers are working several locations, including Mosbly and Dunlap as well as Mosby and Leath.

It is unclear who, if anyone, was shot, as it is being characterized as a “shooting incident.” Local 24 News will bring you the very latest information as details as additional details become available.