Protests have primarily been peaceful in Downtown Memphis until Sunday night, later in the evening, there were clashes between protesters and police.

MEMPHIS, Tenn — 1:35 p.m. - Mayor Jim Strickland has announced a citywide curfew from 10 p.m. - 6 a.m. until further notice. Essential workers & those having medical emergencies are exempt from risk of arrest if found violating this curfew.

NAACP Memphis and Mt. Olive Cathedral CME Church speaking out during a noon news conference Monday on violence against black men and women in the U.S.

Statement from the Memphis Grizzlies

The Memphis Grizzlies stand squarely in opposition to racism and injustice. We condemn all acts of racial violence. It is engrained in our culture and part of our ethos, and we are going to build on established initiatives in our community.

With Memphis’s history as a backdrop, the Grizzlies have been the host and facilitator of some powerful discussions on the Intersection of Race and Sport in conjunction with the annual Martin Luther King Jr. Day Celebration Game. In the coming days, we will be collating and posting videos from the most recent forums and symposiums at Grizzlies.com. Created in partnership with the National Civil Rights Museum, we hope making these meaningful sessions available will serve as a way to further educate and inform through the words and experiences of our Sports Legacy Award recipients and members of the NBA family. We will also will be working with the National Civil Rights Museum to facilitate and amplify conversations specific to this moment in time.

We’ve been committed to the practice of mentorship since 2004, and in moments like these we want to create a safe environment where participants in our mentorship programs can have an open and honest dialogue with each other. As such, the Memphis Grizzlies and its community partners, including the Memphis Grizzlies Foundation, will in the days and weeks ahead coordinate a series of virtual sessions for our Mentors and Mentees to discuss recent events and their effects both here in Memphis and across the country.

We looked internally to understand what additional ways we could support all members of our organization, and recognized that under our current time off policy, staff may have to make a financial sacrifice in order to exercise their right to vote. Knowing fundamentally that change happens at the ballot box, we’ve created a new category of Paid Time Off (PTO) to be used specifically in order to vote so that during local and national elections our staff will never have to make a decision between voting or incurring a financial loss.

Finally, we will work with the National Basketball Coaches Association and support the initiatives they put forward in our community.

12:05 a.m. - Boards have been put up on City Hall windows and barricades are being set up.  Local 24 News' Jalyn Souchek says things have calmed down in the area of City Hall, but, officers are still maintaining a line on Riverside.

10:24 p.m.: Protesters are now back at the National Civil Rights Museum.

8:42 p.m. - Demonstrators are now attempting get on the I-55 bridge to Arkansas.  They have been met by a line of Shelby county Sheriff's deputies in riot gear, blocking the ramp at Crump.

7:20 p.m. - The demonstration has now split into two groups, one led by Pastor Devante Hill, the other is a group with different views.

5/31/2020 - 6:25 p.m. - For the fifth straight night in Memphis, demonstrators will make their voice heard in solidarity and in honor of George Floyd and other recent victims of police-involved killings.

Saturday night, an estimated 500 people marched through Downtown Memphis, and tonight, a similar gathering is planned.

Saturday night's demonstration began outside the National Civil Rights Museum. Hundreds of participants first marched to the Clayorn Temple's "I AM A Man" Plaza, which honors the 1968 Memphis sanitation strike.  There the group read a list of demands, including ways to improve the relations between Memphians and the Memphis Police Department and local government.

The demonstration also stopped to kneel at certain intersections for several minutes, to mark the length of time a now former Minneapolis police officer pressed his knee on the neck of George Floyd before he died.

The demonstration also went to the MLK Plaza, north on Second past 201 Ppolar and back to the National Civil Rights Museum on the Main Street pedestrian mall.

The gathering wrapped around 9:30 p.m., peacefully and civilly.

5/31/2020 - 12:45 a.m. - About an hour after a peaceful demonstration through downtown Memphis Saturday night, people gathered at Main and Beale were met with a heavy MPD presence.

There were dozens of officers dressed in protective gear along with a few officers on horses. There were tens of people gathered as they shouted at police.

Police demanded people disperse, and said if they didn’t, they would be arrested. It's currently not known if anyone was arrested at the scene.

After being asked to disperse, Local 24 News crews saw people run down Beale Street away from the police throwing barricades, garbage cans, and glass bottles.

No stores were vandalized, but a police car parked at Beale and B.B. King Blvd. was damaged. 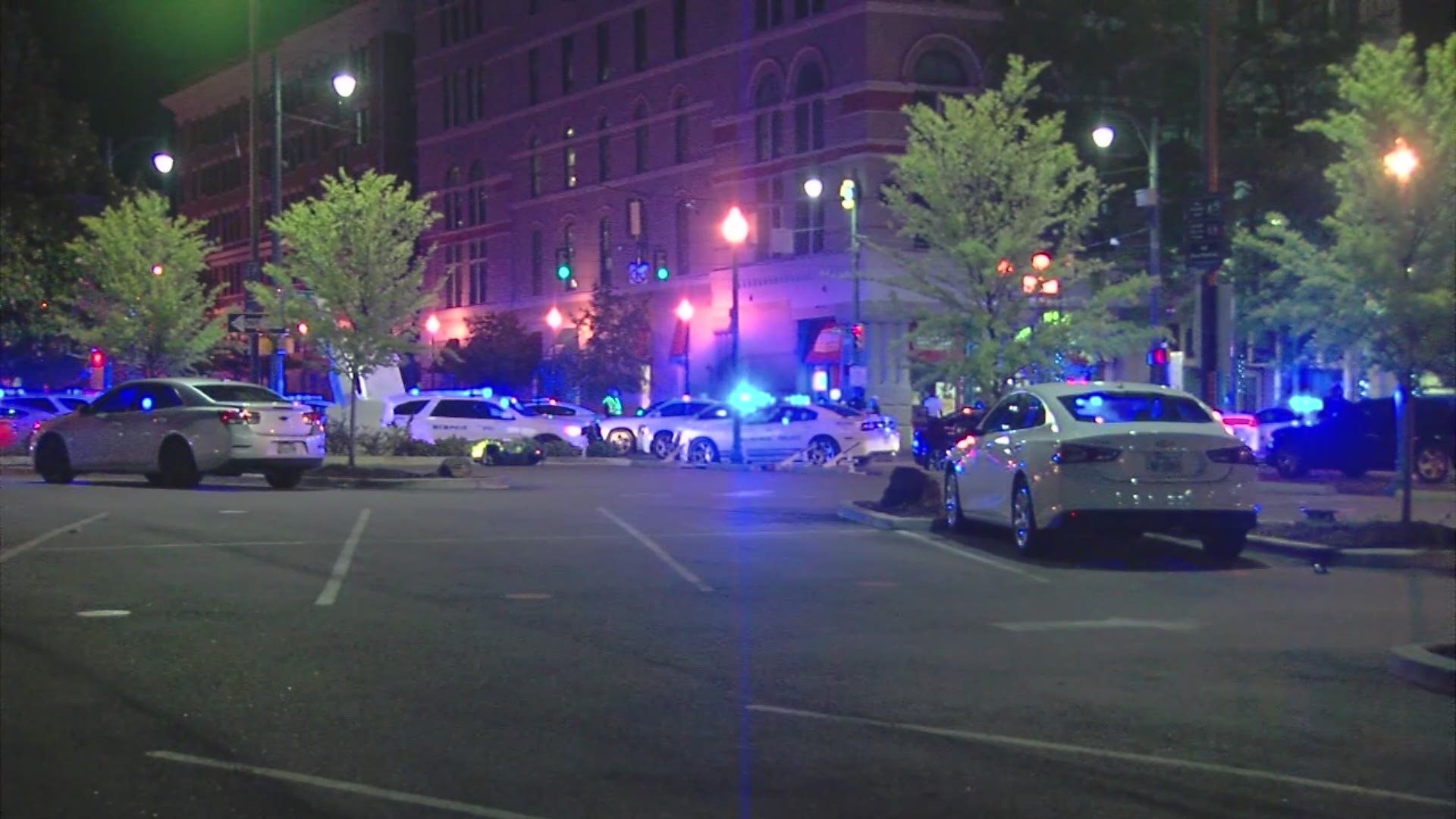 Our crews also saw tear gas thrown, but do not know who threw it.

Right now, it is also unknown what instigated the situation.

MPD has officers in riot gear and has faced off with protesters along Beale Street in downtown, demanding people disperse. WARNING: Offensive language.

8:20 p.m. - Demonstrators knelt along Beale Street then moved on along Second Street through downtown Memphis.

7:50 p.m. - More from the peaceful march in downtown Memphis.

*Warning* This is a live feed and there may be profanity.

RELATED: Large group of protesters temporarily close down I-630 in Little Rock

RELATED: US Park police, protesters face off near White House 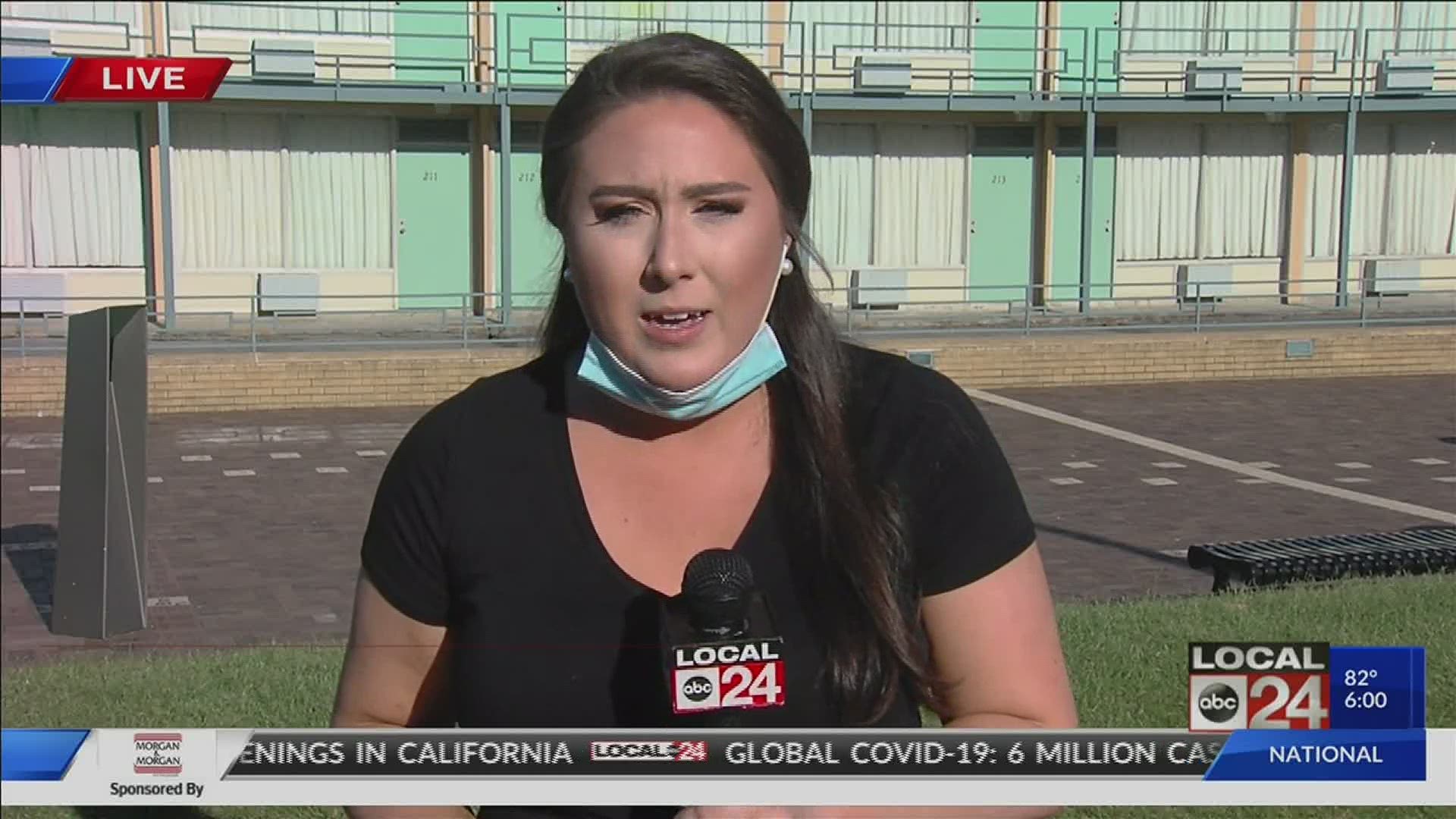 6:15 p.m. - For the fourth consecutive night, Memphis area demonstrators are holding a gathering and making their voices heard after the death of George Floyd earlier this week by a now former Minneapolis Police officer.

Saturday’s gathering is labeled “A peaceful call to protest” and is scheduled to begin at 6:30 p.m. outside the National Civil Rights Museum in downtown Memphis.

An organizer told Local 24 News the overall goal of these demonstrations is to build a unified voice - with not only African Americans, but the LGBTQ community and other ethnicities - to improve relations between MPD and citizens it serves.

That organizer added: “If we are in pain together, we will solve the problem together.”

Local 24 News has learned the march will go to other locations across downtown.

Friday night, the same organizer set up another demonstration in downtown Memphis which hundreds attended. Participants at times kneeled on Beale Street and outside the National Civil Rights Museum.

Director Rallings asked demonstrators “not to take out their anger” on Memphis Police officers during a time of tension, violence, and rioting in other cities across the United States.

Local 24 News will have team coverage of Saturday night’s planned demonstration in downtown Memphis and will bring live updates through the evening on air, online and on Twitter. Follow @Local24Brad & @Local24CaitlinM for updates.

RELATED: 21-year-old shot and killed during Detroit protest over death of George Floyd

RELATED: In unusual move, US embassies in Africa speak up on Floyd

RELATED: Another night of protests in Memphis

RELATED: 'Don't turn your back on racism': Nike ad shines light on race relations in America