A photograph of three University of Mississippi students posing with guns beside a bullet-pocked and oft-vandalized historic marker to lynching victim Emmett Ti... 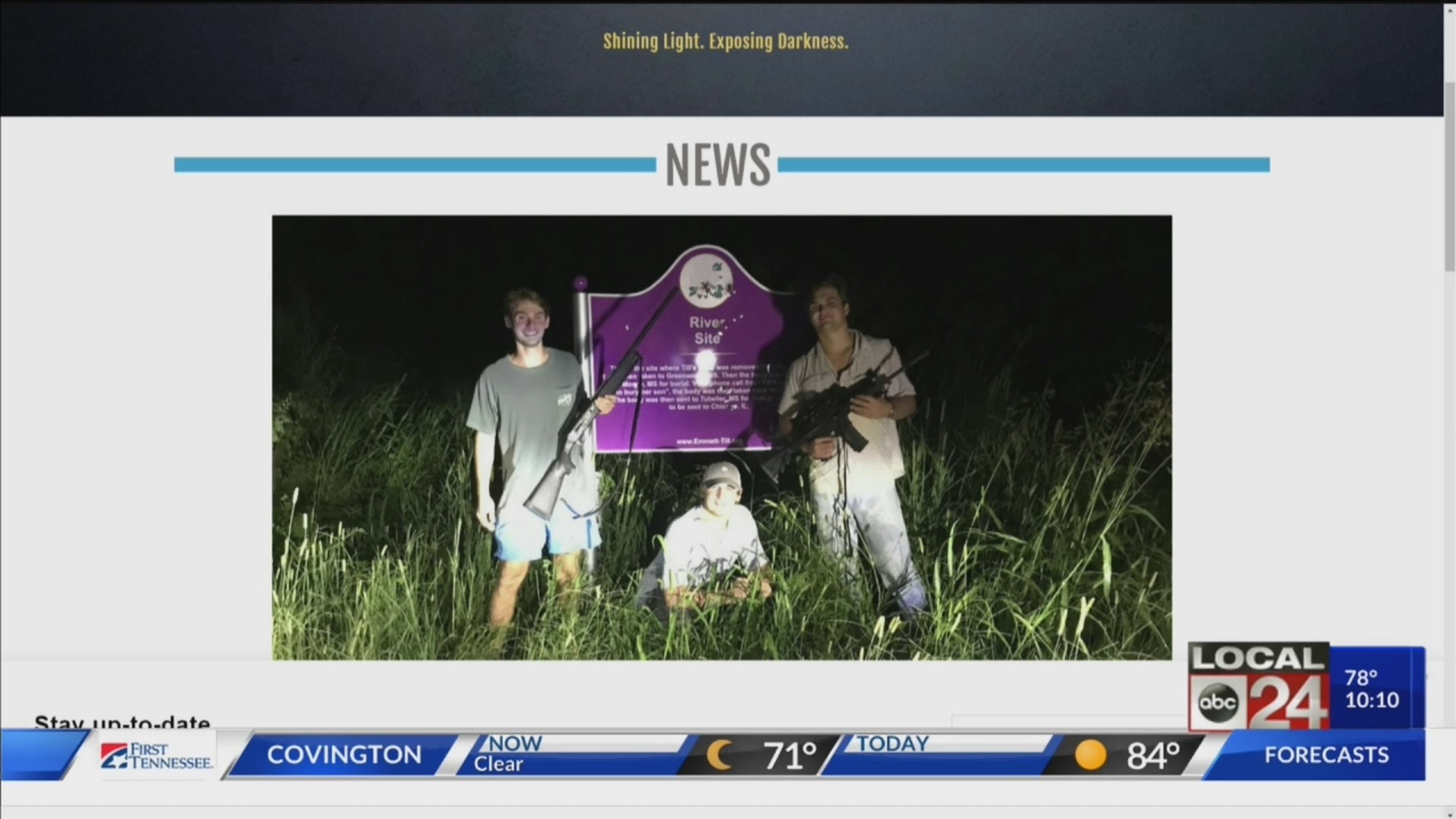 (AP) – A photograph of three University of Mississippi students posing with guns beside a bullet-pocked and oft-vandalized historic marker to lynching victim Emmett Till has sparked a possible federal investigation and suspensions of the three by their fraternity.

The MississippiCenter for Investigative Reporting first published a story about it Thursday,saying the image had circulated on the men’s social media accounts.

Ole Missspokesman Rod Guajardo said the image was reported in March to the university’sBias Incident Response Team, which takes reports of incidents where students,faculty or staff are targeted because of their race or other characteristics.Guajardo said university police asked the FBI to investigate, but says the FBIdeclined to open an inquiry because the photo “did not pose a specificthreat.” Brett Carr, a spokesman for the FBI’s Jackson office, declined tocomment Thursday.

However, U.S.Attorney Chad Lamar told the Mississippi Center for Investigative Reportingthat federal prosecutors are examining the case. Lamar did not respond torepeated emails and phone calls from The Associated Press seeking comment.

Guajardo calledthe image “offensive and hurtful” but said the university hasn’tdisciplined the students because the off-campus picture wasn’t part of auniversity event.

Jesse Lyons,assistant executive director of the Kappa Alpha Order’s national office inLexington, Virginia, said the Ole Miss chapter suspended the three men picturedafter leaders learned of the photo Tuesday. The fraternity has long beenassociated with Old South and Confederate imagery. Although much of thatimagery has been suppressed in recent years, the group still claims ConfederateRobert E. Lee as its spiritual founder. Lyons said that history has nothing todo with the photo.

“Themaking of the photo was unrelated to any event or activity of the chapter. Itis inappropriate, insensitive, and unacceptable. It does not represent ourKappa Alpha Order,” Lyons wrote in an email.

The fraternityand university say they’re working together. Guajardo said Ole Miss is“ready to assist the fraternity with educational opportunities for thosemembers and the chapter.”

It’s unclearwhether the students actually fired at the sign or when the picture was taken.It shows two students standing with guns and a third unarmed student kneelingin tall grass at night, lit by what appear to be the headlights of a vehicle.It’s unclear who took the photograph.

The imagestrikes at what remains one of the nation’s most wrenching civil rights cases,decades after Till was slain in 1955. The African American 14-year-old wasvisiting relatives in the Mississippi Delta when he was kidnapped from arelative’s home after an encounter with a white woman at a country store. Hewas tortured and later shot, with his body found weighted down by a cotton ginfan in the Tallahatchie River. His mother insisted on an open-casket funeral inChicago, letting people see her son’s mutilated corpse and electrifying publicopinion.

An all-whitejury in Mississippi acquitted two white men in the crime.

Like Tillhimself, the markers placed by the Emmett Till Memorial Commission have beenshattered by violence. The marker in the photograph, at the remote spot whereTill’s body was recovered, was the third to stand there after two earliermarkers were destroyed by vandals.

“For me,it is just as sacrilegious as if I took the United States flag and shot it upwith bullet holes,” commission member Jessie Jaymes said in a videoproduced by the commission in response to the vandalism. “The hearts ofsome men never change. They mark their territory with bullet holes.”

Weems said thesign was removed last week after the center learned news of the picture waslikely to emerge. He said officials feared more attention and vandalism. Weemssaid the commission hasn’t been contacted by the university or federalofficials. He said the commission plans a fourth marker that’s made of hardenedsteel, more resistant to bullets. He said the commission is also negotiating alease for 2 acres (0.8 hectares) at the river’s edge for a fuller memorialsite.

“Wealready have a new sign on its way,” Weems said.

Susan Glisson,who has helped advise the commission on how to memorialize Till in a way thatwould further healing and justice, said the repeated vandalism is an attempt toblot out the power of the story of what happened to Till, instead upholding awhite-dominated social order.

“It’seasier to cancel out that story for some people than it is to engage with thetruth,” said Glisson, co-founder and partner in Sustainable Equity, aconsulting firm that works in community building. Glisson was the foundingdirector of the William Winter Institute for Racial Reconciliation when it washoused at Ole Miss.

In an earliercase, two students were convicted of federal crimes after draping a noosearound the neck of the university’s statue of James Meredith in 2014. Meredithintegrated Ole Miss in 1962 amid rioting that was suppressed by federal troops.