If your car is damaged, you can file a claim to be reimbursed. 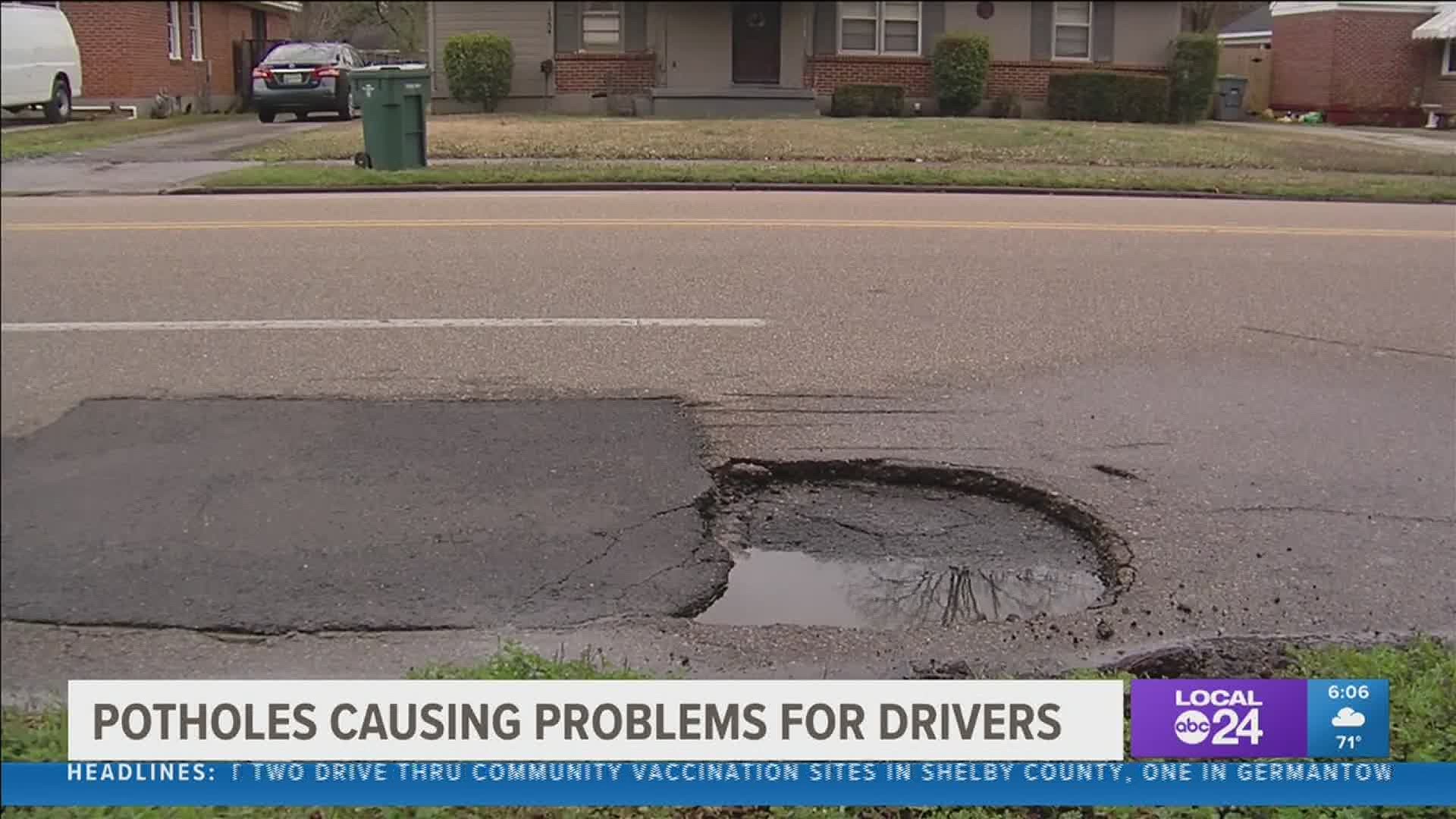 MEMPHIS, Tenn. — It may feel like spring is here but the wintry weather from a few weeks ago left the roads a mess.

Potholes are causing big problems on Mid-South streets. We're told crews are working as fast as they can trying to fill them up.

Drive around and it probably won't take you very long until you either have to dodge a pothole or end up hitting one.

"I didn't really see this crater-like pothole until the very last second. I tried to swerve and miss it but I did not," said driver Michael Morrison.

Morrison ran into one on the interstate near the Lamar, causing hundreds of dollars' worth of damage to the car.

"It was just a big jolt to the vehicle, but you can hear the air coming out of it immediately, so I knew I was in trouble," said Morrison.

Every year in the Mid-South we deal with potholes. They form when snow and rain fall into cracks on the road.

When that water freezes and thaws, it can cause erosion under the pavement. And when cars drive over the pavement and it comes loose, a pothole is formed.

Knecht said since the snow has melted, city crews have been filling potholes at a rapid rate, last week filling as many as 1,500 a day. That number has decreased to about 500 a day because crews are catching up.

RELATED: Who to contact when you see a pothole in the Memphis area

But here is the deal: many of the major roads in our area are state roads, which means pothole repairs on the heaviest traveled roads and interstates in Memphis are the responsibility of the State of Tennessee.

Whether it's the city or the state, if your car is damaged you can file a claim.

According to the State of Tennessee, to be reimbursed you must prove that the state was aware of the danger prior to your incident and could have repaired it - but didn't.

The city of Memphis will only pay a pothole claim if the pothole was previously reported to the city and crews didn't repair it within five days of being called in.

Here is the link for information regarding filing  a claim with Memphis or Tennessee.

As for Morrison, he doesn't know if anyone reported the pothole he hit on the interstate. He is just glad the damage wasn't worse.

Whether it's a city road or the state road, you can report potholes to 311. We are m told the pothole information will make it to whomever is responsible.

Here is the link If you want to report a pothole directly to the state of Tennessee.

Potholes
Pothole FAQs There are several reasons why a newly filled pothole may reopen: When conditions are cold or wet, the material used to patch potholes doesn't stick as well to the surrounding pavement as when conditions are dry and warm. During the winter months, asphalt plants are closed and hot asphalt is not available until the spring.

The freeze/thaw cycle is creating pothole issues across the state. The operators who plowed the roadways last week are treating potholes this week. Please remember to work with us – move over, slow down. You can report potholes here: https://t.co/7IbEVT4F3y#myTDOT #WorkWithUs pic.twitter.com/ZwkaknRHiO