Outraged BLM protesters go to home and office of a man at center of viral video, organizers say they wanted to send man strong message 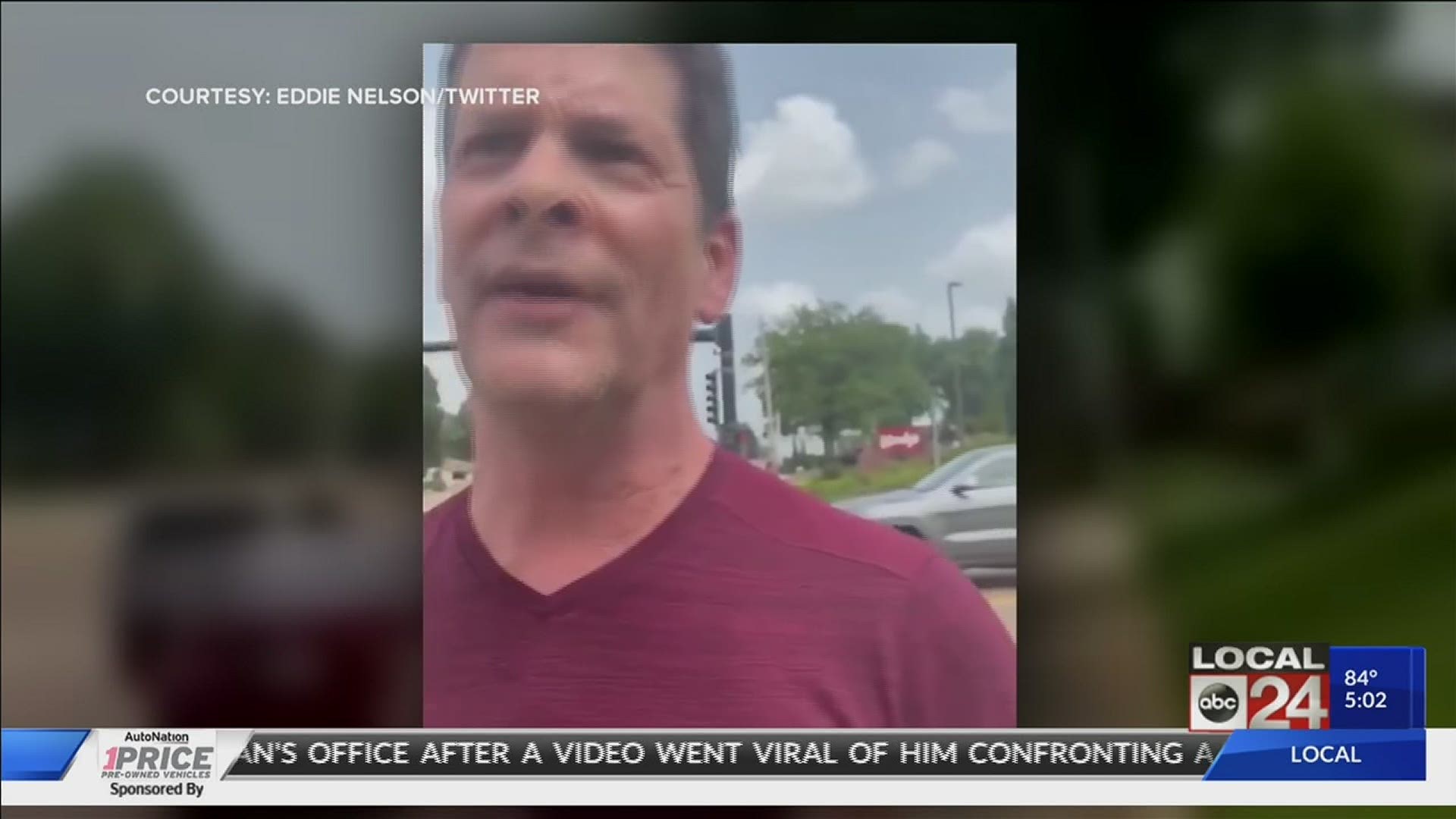 GERMANTOWN, Tennessee —
Monday, Black Lives Matters protesters converged on the home and business of a Germantown man after a video went viral of him confronting a supporter over the weekend.

The man identified himself Lloyd Crawford in a video recording taken by Eddie Nelson. Nelson spent Saturday afternoon at the corner of Poplar and West holding a Black Lives Matters sign.

Nelson said he was at the corner when Crawford and he had a verbal exchange that was initiated by Crawford. About 10 minutes later, Crawford is seen on the video walking up to Nelson. He then confronts Nelson asking him if he lives in Germantown and why he is there promoting Black Lives Matters. He goes on to tell Nelson, he wants him "out of his town."

Nelson posted the exchange which has now gone viral, viewed more than 500,000 times.

During the exchange, Crawford flashes his business card with his identifying information.  Protesters went to Crawford's Germantown office today to protest. He is a partner in a financial group. 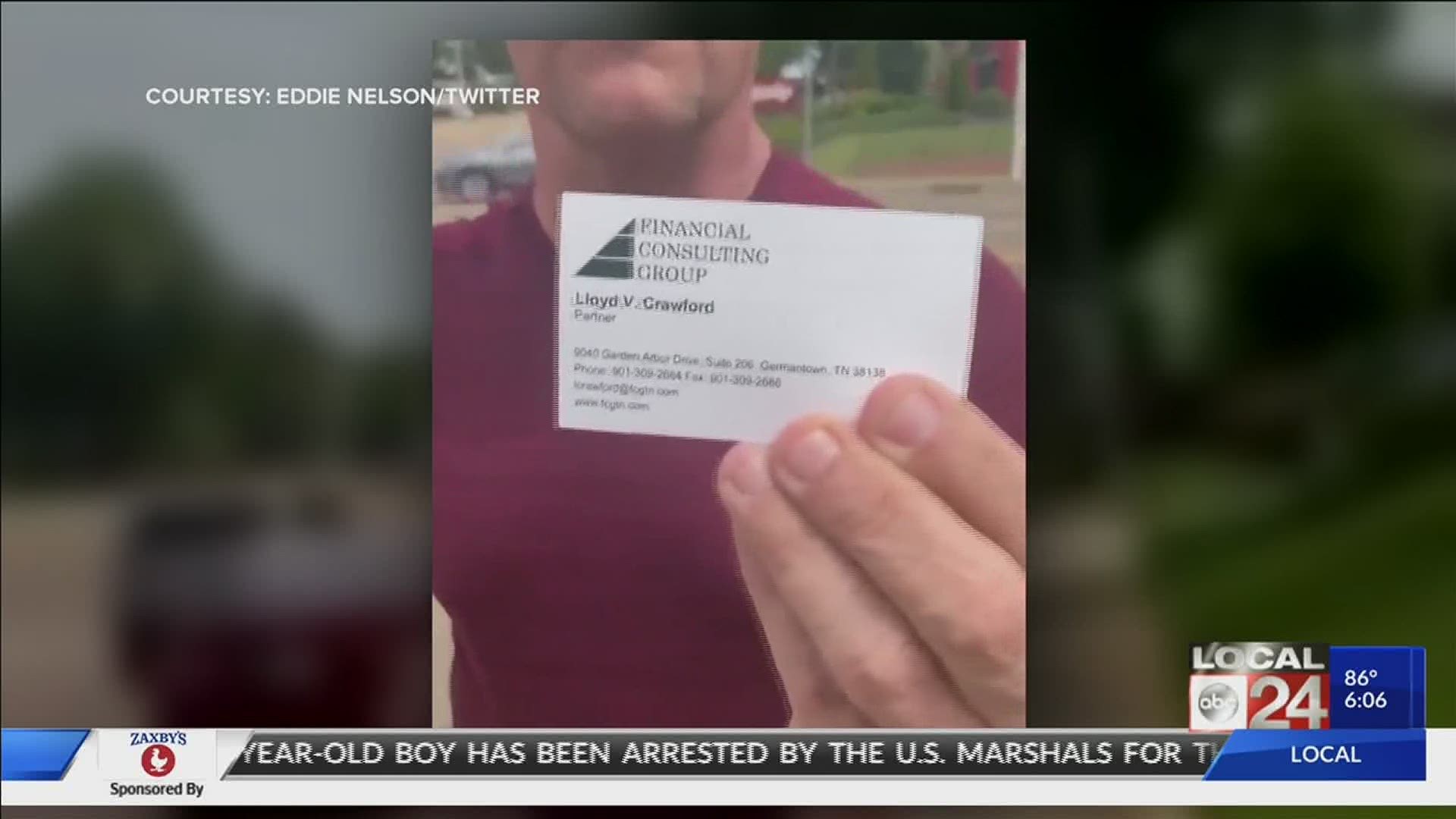 After protesting at his office, the group then went to Crawford's Germantown home. Protesters say hate will not be tolerated.

"We are going to show up wherever we need to to send a clear message. that racism will not be tolerated in Memphis or anywhere else in this county," said Theryn C. Bond, organizer.

" This is just a warning to anyone who wants to show their racism that we are going to show up and shut it down," said LJ Abraham, organizer.

Eddie Nelson, was also at Monday's protest and spoke about the confrontation over the weekend.

"Black Lives Matters illicits such a negative response from people in the community, from this community, it's really telling," said Eddie Nelson, protester.

Our calls and emails to Crawford to hear his side of the story have gone answered. Crawford has reportedly said Nelson was the instigator.

"Lloyd's a liar. He said I instigated it. That's not true," said Nelson. "I turned the video on because it was for his safety and my safety. I didn't want any question as to what happened."

RELATED: Protesters reflect on the significance of Juneteenth amid nationwide protests

Nelson went on to say, "It is pretty telling that it took a white guy to post a video like this to get such a reaction. There's black people posting videos like this all the time."

While Crawford stayed inside his home during the protest, organizers say he got the message loud and clear.

"I think he underestimated what all of this means, but he definitely knows now," said Bond.

Germantown put out this statement:

The City of Germantown is aware of a video circulating the internet involving a resident and another individual.

The First Amendment to the United States Constitution states "Congress shall make no law respecting an establishment of religion, or prohibiting the free exercise thereof; or abridging the freedom of speech, or of the press; or the right of the people peaceably to assemble, and to petition the government for a redress of grievances.” Those rights are protected and respected by the City of Germantown.

We also want to be clear - our community is for everyone. You are welcome. You are safe.

The City of Germantown takes pride in the diversity of our community. The way we conduct ourselves professionally and personally means we carry out our duties ethically and with compassion toward the community that we serve. We treat all people equitably regardless of background, race, religion, political views or orientation. We expect human decency. Our workforce is built upon a foundation of positive relationships and mutual trust. There is no room for racism and no room for personal violence in our community.

“The voice of one individual does not represent the voices of the more than 40,000 people who call Germantown their home,” said Mayor Mike Palazzolo. “Our community values a culture of excellence and kindness, and this incident does not reflect who we are as a community,” Mayor Palazzolo added.