Two investigations are underway to study the whale's death and a grounded boat found nearby. 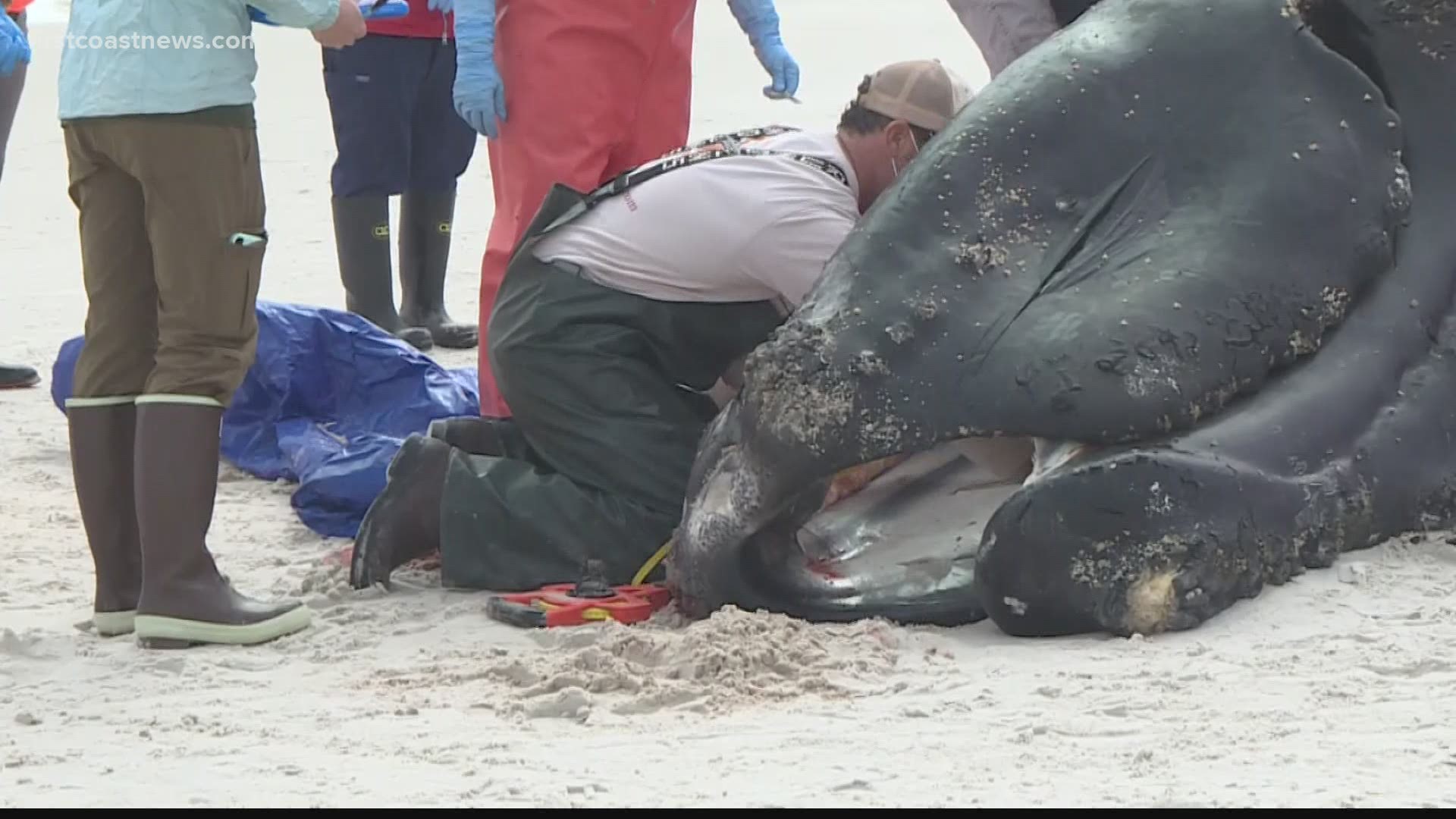 A two-month-old right whale calf washed ashore this weekend in St. Augustine after it was fatally struck by a boat.

Sunday, dozens of scientists dissected the animal right on the beach to learn more about it and what led to its death.

"It’s a long process. It’s a detailed process. And it’s a little bit of a sad process," Tom Pitchford said, standing just a few yards away from the whale Sunday. He is a Biologist with the Florida Fish and Wildlife Conservation Commission.

The right whale calf washed up on Anastasia State Park in St. Augustine Saturday morning between the park's bathhouses and the St. Augustine Inlet.

"This is incredibly important," Megan Stolen said. She is a Research Scientist at the Hubbs Research Institute in Melbourne Beach, Florida. Sunday, she led the necropsy which is an animal autopsy for the 22 foot long, 3,000 - 4,000 pound baby behemoth.

"This is an endangered species," she said. "This is our chance to understand the anatomy and physiology."

This study could also help connect the dots between this dead whale and a grounded boat a few miles away on Salt Run.

"There are two open law enforcement investigations," Pitchford said.  One is for the dead whale. The other investigation centers on the boat.

While investigations are ongoing, government agencies are hesitant to say if this boat struck this whale Friday evening. But according to a firefighter who rescued people from the boat, the passengers told him, they thought they "hit a whale" near the St. Augustine inlet.

Stolen says the captain did the right thing by reporting it quickly.

Regarding the whale's necropsy, she said, "We have seen evidence that is consistent with a boat strike."

The fresh cuts on the whale’s back are indicative of being hit by a propeller.

"It was hit hard enough to break bone, ribs and part of the skull," Stolen said.

The upper inside part of the dead whale’s mouth has a crack that runs through it. Stolen says the crack was most likely caused by the strike.

A law enforcement officer told First Coast News that Saturday morning, right after the whale was reported on the beach, that bystanders thought they saw the mother whale hanging right around, just off the beach near where the calf was.

Pitchford said, "We don’t know how mom is doing. We don’t know if Mom is also struck. We don’t think so, but we sure would like to get at look at her."

This chance to study the anatomy of this rare animal is bittersweet.

Stolen said, "We would like to be out of business. I would like to not do this anymore. I mean the day I don’t have to show up for a right whale necropsy is a good day."

This is the time of year North Atlantic right whales swim along the nation’s southeast coastline to have their calves. Please be aware that they often come close to shore. You don’t want to hurt them or damage your boat. If you see any kind of whale, call 877-WHALE-HELP or 1-888-97-WHALE (94253).