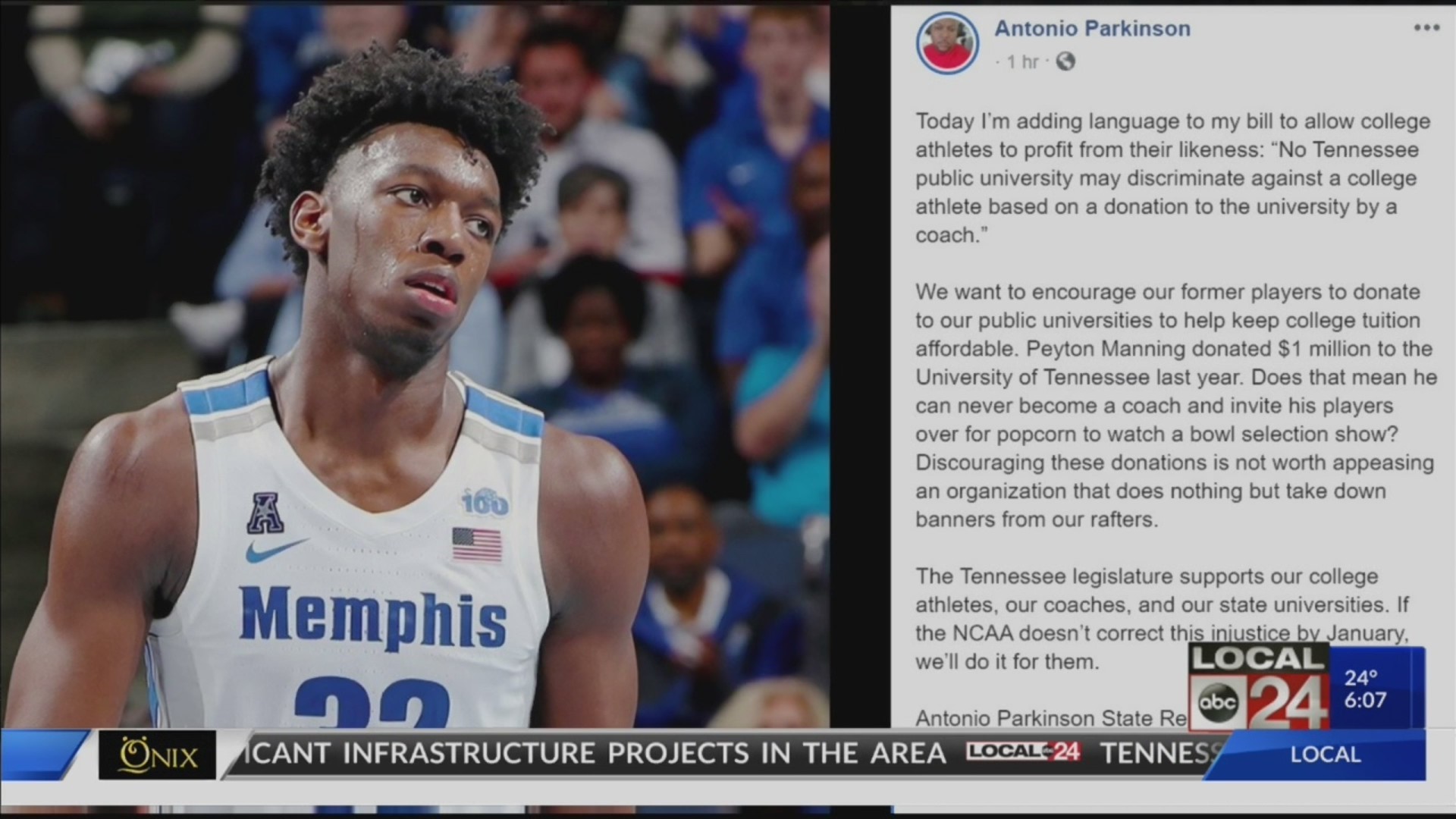 MEMPHIS, Tenn. (localmemphis.com) – UPDATED – Two local Tennessee lawmakers want to add to their bill – which currently focuses on allowing college athletes to get paid – in light of the NCAA/James Wiseman controversy.

In a Facebook post, State Rep. Antonio Parkinson says that he wants to add the wording – “no Tennessee public university may discriminate against a college athlete based on a donation to the university by a coach.”

Wiseman was ruled ineligible after news came out that PennyHardaway gave more than $11,000 to Wiseman’s family before the NBA star begancoaching the Tigers.

Parkinson ended the post by saying that if the NCAA doesn’tcorrect this injustice against Wiseman by January, the state legislature woulddo it for them.

Tennessee St. Sen. Brian Kelsey is also sponsoring the legislation in the state Senate. He sent the following release to Local 24 News.

Senator Brian Kelsey’s (R-Germantown) bipartisan bill to allow college athletes to profit from their likeness will also prohibit public universities from discriminating against players based on coach donations to universities.

“We want to encourage our former players to donate to our public universities to help keep college tuition affordable,” Sen. Kelsey said. “Discouraging these donations is not worth appeasing an organization that does nothing but take down banners from our rafters. The NCAA is an archaic organization whose time has come and gone. It is up to the athletic conferences to create a new paradigm, as they did with the college football championship.”

In September, California passed legislation empowering college athletes to profit from their image and likeness, autographs, and endorsements, allowing compensation to be determined by the free market. Sen. Kelsey announced that he will introduce legislation in Tennessee modeled after the California bill, instituting the Olympic model of compensation for college athletes in Tennessee. Today, he announced additional language to ban public universities from discriminating against players based on donations to the university by a coach.

“Peyton Manning donated $1 million to the University of Tennessee last year,” Sen. Kelsey said. “Does that mean that he can never become a coach and invite his players over for popcorn to watch a bowl selection show? This arcane NCAA rule would discourage Eric Berry from donating to the University of Tennessee in case he wants to ever become the UT defensive backs coach.”

The General Assembly will begin its next legislative session on January 14, 2020.

“The legislature supports our college athletes, our coaches, and our state universities,” Sen. Kelsey said. “If the NCAA doesn’t correct this injustice by January, we’ll do it for them.”

Rep. Antonio Parkinson (D-Memphis) plans to sponsor this legislation in the House. “I want to remind everyone that state law trumps any rule that is created by the NCAA,” Rep. Parkinson said. “Unfortunately those rules created by the NCAA are harmful to the student athletes who actually generate the revenue in college sports. Lastly, if you remove the student athletes, the NCAA becomes nothing but a useless organization.”