The NRC moves follow an investigation into the conduct of Joseph Shea and Erin Henderson. 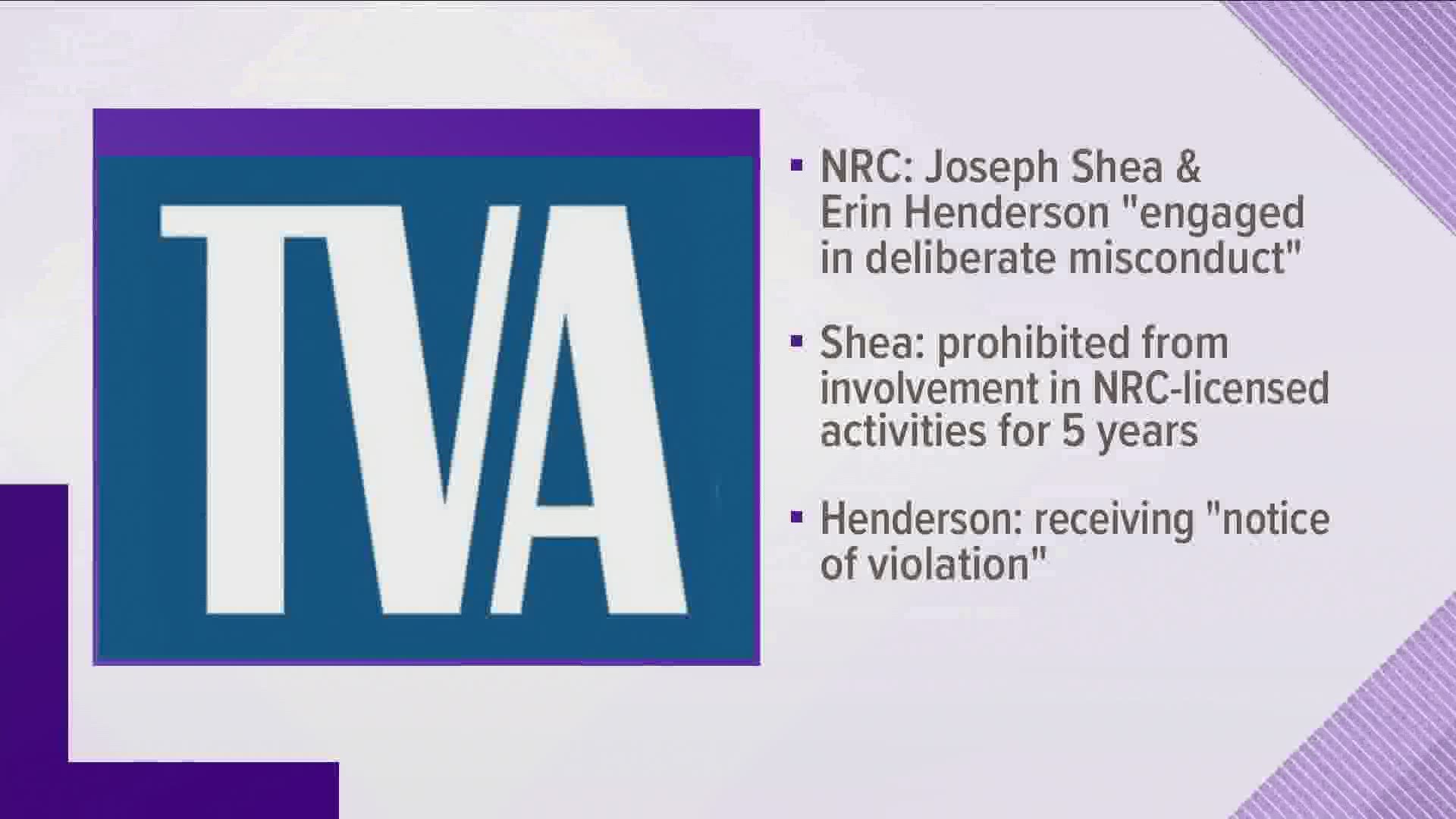 KNOXVILLE, Tennessee — The federal Nuclear Regulatory Commission is assessing a penalty of almost $607,000 against TVA and punishing two TVA executives after an investigation found they sought to punish two employees who came forward to express legally protected concerns.

The actions follow an NRC investigation into the conduct of Joseph Shea, identified as vice president of nuclear technology innovation at TVA's corporate office, and Erin Henderson, then the director of corporate nuclear licensing at TVA.

They were formally notified Monday in letters. Henderson and Shea, who remain with TVA, and the utility giant have 30 days to respond, documents show.

"We take this issue very seriously and respect the NRC’s decision," TVA spokesman Jim Hopson said in an email Tuesday "TVA previously investigated these events, which occurred several years ago, and did not reach the same conclusion as the NRC. We are continuing to evaluate the NRC’s notice and are evaluating our next steps."

The Knoxville-based TVA this summer has faced the scorn of President Donald Trump, who fired two TVA board members and said TVA CEO and President Jeff Lyash, on the job since spring 2019, is vastly overpaid.

The NRC found essentially that Henderson and Shea discriminated against the two unnamed employees who raised concerns about a chilled work environment that discouraged them from talking about safety concerns.

According to a public notice Tuesday, the NRC found that Shea and Henderson "engaged in deliberate misconduct."

"The NRC is prohibiting (Shea) from any involvement in NRC-licensed activities for five years, since he was a decision-maker for the adverse employee actions. The NRC is issuing a Notice of Violation to (Henderson)."

According to NRC records, the case dates back several years ago when a whistleblowing employee at the Sequoyah Nuclear Plant operated by TVA in Soddy-Daisy, Tenn., expressed concerns about the regulatory response to violations regarding operations at the plant.

The now former employee was legally protected to speak up to Henderson from a safety context. The employee also filed a complaint alleging Henderson had created "a chilled work environment," records state. 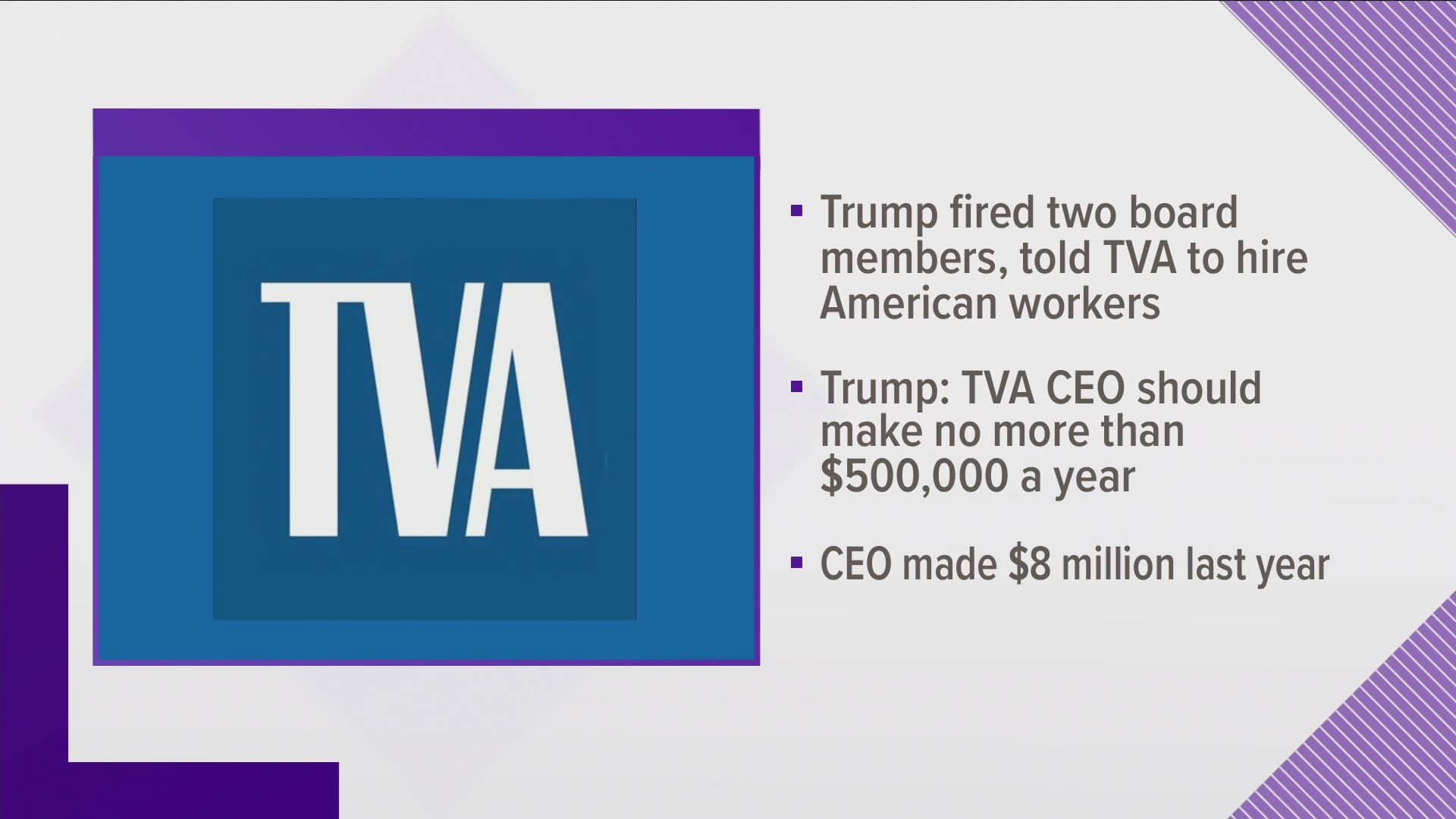 Henderson, the NRC investigation found, sought an investigation in March 2018 against the worker, alleging that person had harassed her.

"There is a nexus between the former employee’s protected activity of raising concerns about a chilled work environment and your filing a complaint, which triggered the investigation," the letter from George A. Wilson, director of the Office of Enforcement for the NRC, states. "In your complaint, you identify the former employee as the source of the allegation of a chilled work environment and cite this allegation against you as an example of an 'act of harassment.' Thus, the document that triggered the former employee’s investigation, your complaint, demonstrates the nexus between the protected activity and the adverse action."

The notice of violation against Henderson amounts to a reprimand.

"In determining the appropriate sanction to be issued in this case, the NRC considered issuing an Order prohibiting your involvement in NRC-licensed activities as a result of your actions. However, because you were not the decision-maker that placed the former employees on paid administrative leave or terminated the former corporate employee, I have decided to issue the enclosed Notice of Violation," Wilson's letter states.

According to the NRC records, Shea was a decision-maker when it came to disciplining an unnamed corporate employee and thus should face stronger discipline. The NRC is directing that he be barred from taking part in any NRC-licensed activities -- meaning nuclear power -- for the five-year period.

The commission's investigation found that the former corporate employee was first put on paid leave in October 2018 and then fired in January 2019 by Shea "in part for engaging in protected activity, including raising concerns about a chilled work environment."

Shea, according to the NRC disciplinary order, said during a conference with investigators that he terminated the former employee for being “disrespectful” to Henderson.

His statement reads: "We work on it every day and in recent years have taken multiple actions to strengthen our Nuclear Safety Culture. We presented numerous examples of this to the NRC and they have noted our improvement in recent evaluations and inspections."