What will be in history books when future students learn about the 25th Amendment? Historians explain

There is no doubt the riot at the Capitol will be in history books, but will removing the President be included? 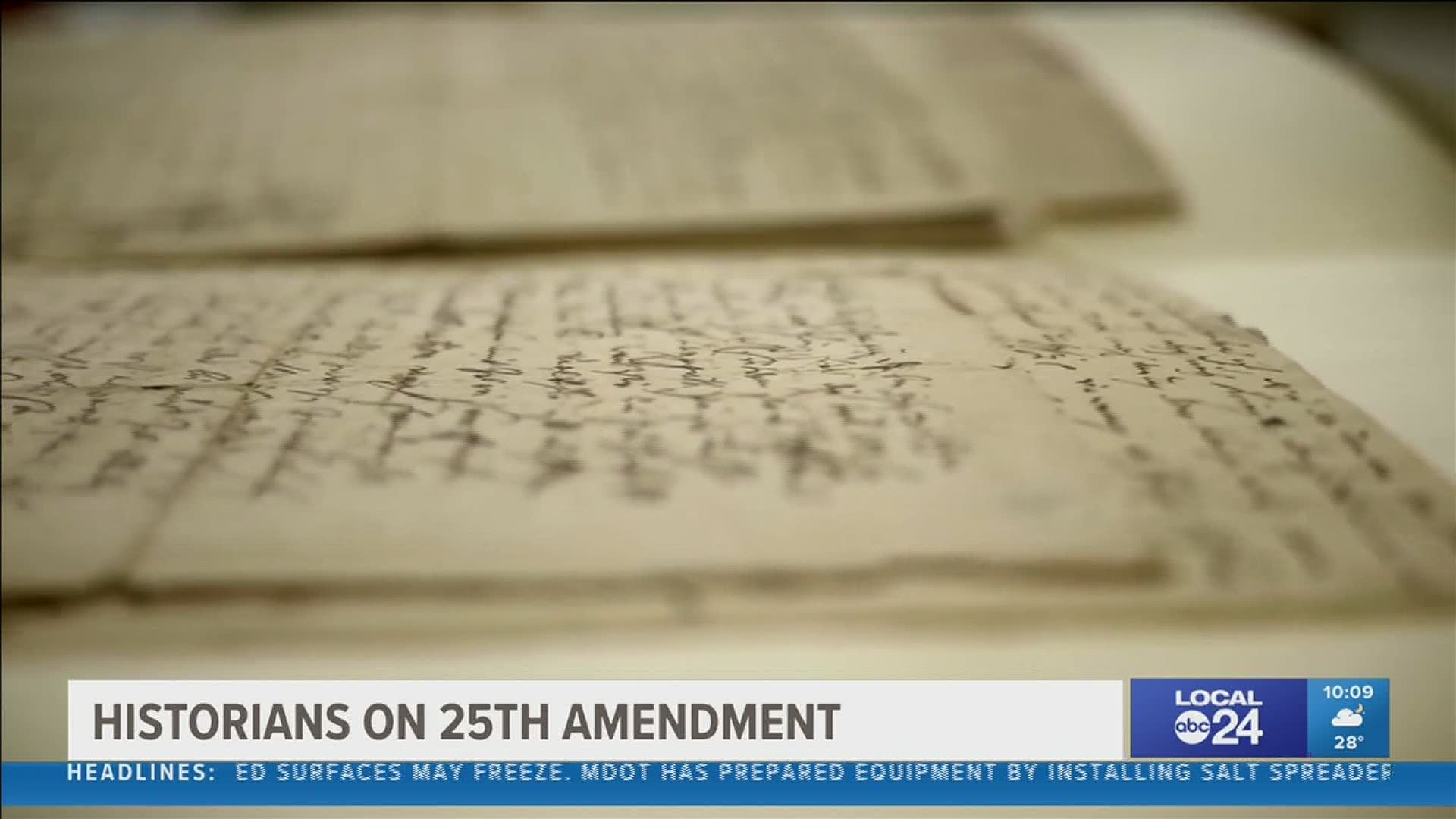 MEMPHIS, Tenn. — Constitutional history scholar Dr. Scott Marler at the University of Memphis explained President Donald Trump will not be removed from office through the 25th Amendment in under nine days. If Vice President Mike Pence were to change his mind on the invocation, there's a chance it could turn into a long process to reaffirm the removal.

"The president has the opportunity to respond to a presumed disability or inability to exercise his office after it's voted on by the Vice President and his Cabinet," Marler said.

American history scholar Dr. Aram Goudsouzian at the University of Memphis said considering the political climate in Washington D.C. it will be nearly impossible.

"That said it is clearly a circumstance where invoking section 4 of the amendment and removing President Trump from power would certainly be legitimate," Goudsouzian said.

Goudsouzian said constitutional scholars will agree in this situation it would be justifiable to use the 25th Amendment.

"It would take a remarkable set of circumstances and a president who has truly lost a grip on reality for that to occur," Goudsouzian said. "I think we are in that moment though. This is a very unique moment in American history and it’s particularly dangerous."

Republican Senator Roger Wicker of Mississippi expressed his opposition to removing the president under the amendment.

“In accordance with our Constitution, the orderly transfer of power will occur at noon on January 20," Wicker said. "The best way for our country to heal and move past the events of last week would be for this process to continue.”

Democratic Rep. Steve Cohen of Memphis said the president should be removed from office.

"The cabinet had four years to oppose Trump's corrupt, racist, anti-democratic regime," Cohen said on Twitter. "Now’s the last chance: Invoke the 25th Amendment and remove this dangerous president who cannot discharge his duties and fulfill his constitutional oath."

More Mid-South members of Congress are sharing their stance on invoking the #25thAmendment @SenatorWicker from MS says no stating the orderly transfer of power will happen on Jan. 20@RepCohen from Memphis says yes stating the Pres. "cannot discharge his duties."@LocalMemphis

Invoking this amendment has been discussed for a number of presidents' health concerns, but never for one's mental fitness and inciting a riot against our government. Dr. Marler said the opposition to the Electoral College certification showed the fragility of the constitutional republic in which we live.

"The Constitution ultimately is just paper," Marler said. "It’s only as good as the politics behind it, and in this instance, the politics devolved into violence and the constitution itself was at stake."

While historians will work to remain objective when documenting this part of our narrative, Trump's policies and rhetoric will be viewed with critical eyes for generations to come. Only time will tell what will end up in our history books, but Marler predicts within the next few years historians will be lined up against the president.

"There’s such a thing as historical revisionism. We’ve seen it time and time again," Marler said. "Historians practice it themselves so looking two generations down the road it’s a little harder to say."