The Ohio Innocence Project and public defender advocates drew attention to the case, which an appeals court called 'a travesty of justice.' 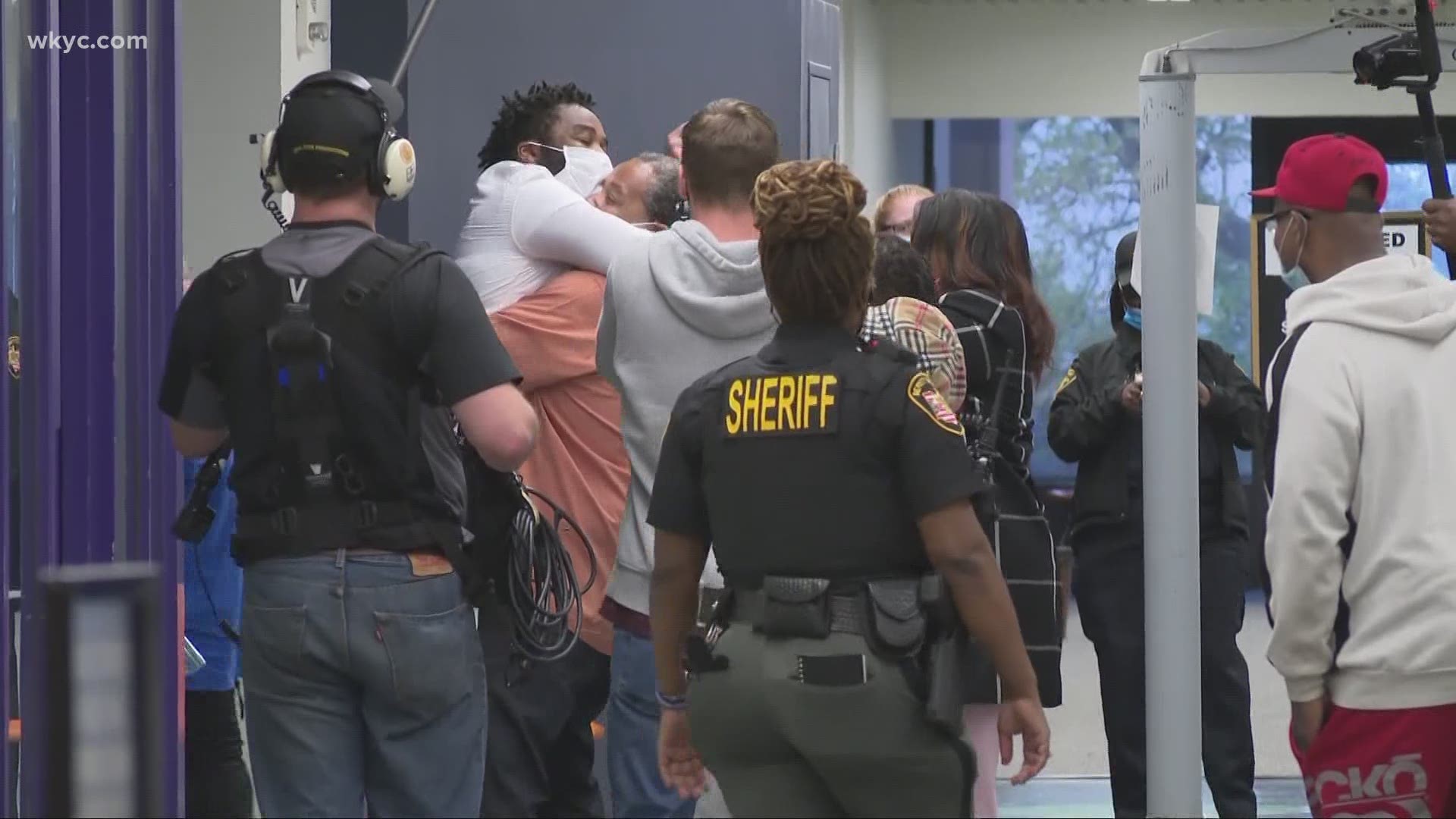 CLEVELAND — $50,000 personal bond. That's what a judge set for two Cleveland men to be released Monday after both spent nearly 15 years in prison for a crime they say they didn't commit.

Their bond was set during a brief court hearing after the 8th District Court of Appeals unanimously overturned their convictions and granted a new trial for Michael Sutton and Kenny Phillips. The court found there was no physical evidence tying the men to an alleged attempted murder, and that both were denied a fair trial after two police officers offered statements contradicting court testimony that were never shared with defense attorneys.

During Monday's hearing, the Cuyahoga County Prosecutor's Office deferred to the court regarding the decision to release the men on bond until a decision on whether to pursue a new trial is made.

Their bond came on the condition of court-supervised release -- the first month of which is to include a GPS monitor. The judge also anticipated that a new trial will take some time to get started -- possibly as long as one year.

We streamed Monday's full bond hearing, which you can watch in the player below:

The revelations were made by attorneys from the Ohio Innocence Project and the Ohio Public Defender Commission's Wrongful Conviction Project, which advocated for the two men.

"Both of us are with organizations that only work on cases of actual innocence," Donald Caster, attorney for the Ohio Innocence Project and Associate Professor of Criminal Law at the University of Cincinnati, told 3News before Monday's hearing. "It was clear to the court of appeals that Michael and Kenny were wrongfully convicted, and the court of appeals went so far as to call Michael and Kenny's trial 'a travesty of justice.'"

Sutton and Phillips were both 17 years old when they say they heard gunshots coming from a car, as they were driving around town. They pulled over when they saw a police car zooming up to their rear, thinking that the officers were going to pursue the other car. The cops arrested the teens instead.

Two officers testified that the shots came from the teens' car, and that one of the teens fired shots at officers during a foot chase. A Cuyahoga County jury found the pair guilty in 2006 of charges including attempted murder of a police officer.

Sutton was sentenced to more than 40 years in prison, and Phillips (the accused shooter) received 61 years. However, attorneys from the Ohio Innocence Project and the Wrongful Conviction Project argued there was no physical evidence linking Sutton and Phillips to the crime.

"There's allegedly this shootout, but there's no guns, no bullets, no casings, even though four young men were arrested right on the scene in minutes," Joanna Sanchez, attorney for the Wrongful Conviction Project, said. "What we came to learn in about 2015 is that there were two other police officers who were at the scene on the night of the crime who had a very different account and essentially exonerated Kenny and Michael."

"The racial disparity in our criminal justice system exists," Sanchez said. "Young Black males are wrongfully convicted at disproportionate rates, and that appears to be what happened here."

Phillips, now 33, has missed seeing his three daughters grow up, and Sutton never got to attend the University of Akron after being accepted.

"Oh my God, 15 years is a long time," Elaine Phillips, mother of Kenny Phillips, said through tears, following the court hearing. "My only son, my baby boy. I just want to hug him."

"This is the best Mother's Day that I'm going to have," said Roberta Sutton, Michael Sutton's mother. "I don't want anything but my son," she said.

About 100 family members, friends, and supporters swarmed Michael Sutton and Kenny Phillips as they exited the county jail amid cheers, laughter, and hugs. However, they know that their fight is not over, until the men are either acquitted in a new trial, or exoneration.

As expected, we are appealing this decision. We owe nothing less to victims of this crime. In the end, we must allow the entire legal process to run its course and we will be satisfied with whatever the outcome may be.

Prosecutors have until May 27th to file a motion to appeal the ruling by the Ohio 8th District Court of Appeals. The case will then go before the Ohio Supreme Court, which will first decide whether to consider the case. If it does, they could either affirm the appeals court's decision to overturn the convictions, or reverse it.