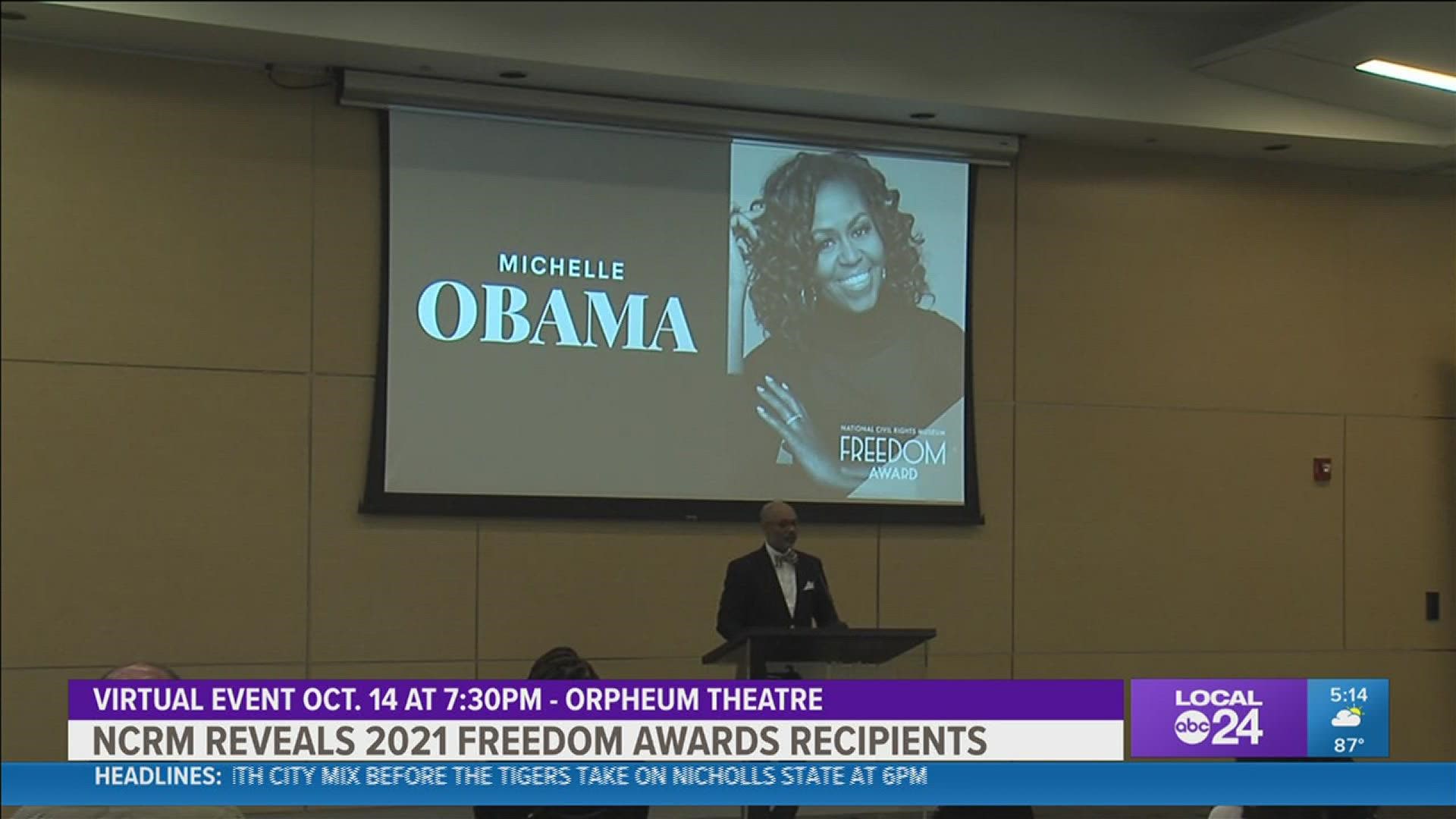 MEMPHIS, Tenn. — The National Civil Rights Museum announced the recipients of this year’s Freedom Awards, for the 30th anniversary of the event.

The Freedom Award honorees are Michelle Obama and The Poor People’s Campaign led by Rev. Dr. William Barber and Rev. Dr. Liz Theoharis. A special tribute will recognize Darnella Frazier, who shot the video of George Floyd that launched protests across the globe.

The NCRM said through her initiatives, Michelle Obama has become a role model for women and an advocate for healthy families, service members and their families, higher education, and international adolescent girls’ education.

NCRM said The Poor People’s Campaign - A National Call for Moral Revival - picked up the unfinished work of Dr. Martin Luther King Jr. and others, to “confront the interlocking evils of systemic racism, poverty, ecological devastation, militarism and the war economy, and the distorted moral narrative of religious nationalism.”

Rev. Dr. William J. Barber II began the Moral Movement with weekly “Moral Monday” protests in North Carolina in 2013. He helped to relaunch The Poor People’s Campaign in 2018, along with marches in Washington. Rev. Dr. Liz Theoharis co-chairs with Barber. She is director of the Kairos Center for Religions, Rights and Social Justice at Union Theological Seminary in NYC. For more than 20 years. She has worked with grassroots organizations against homelessness, for worker’s rights, and welfare rights.

Darnella Frazier will be presented with a special tribute. She shot the eyewitness video of George Floyd that led to protest against injustice and brutality around the world.

Actor, activist, and entrepreneur Lamman Rucker will be this year’s host.

“This year is the double 30th anniversary of the National Civil Rights Museum, dedicated to being a catalyst for positive social change and a place where the truth in history lives,” said Dr. Russell Wigginton, the National Civil Rights Museum President, in a statement. “And, for this 30th Freedom Award, we honor Michelle Obama and Rev. Dr. William Barber and Rev. Dr. Liz Theoharis, leaders of the Poor People’s Campaign, who have distinctly changed our communities, nation and world.”

“We’re devoting this Freedom Award to those who have, and are still, creating life-changing blueprints for our society,” said Faith Morris, Chief Marketing & External Affairs Officer and Managing Director/Producer of the Freedom Award. “A special moment will focus on those events this past year that changed the way this nation sees and deals with racial injustice including a special tribute to the teenager who triggered a national conscious-raising response.”