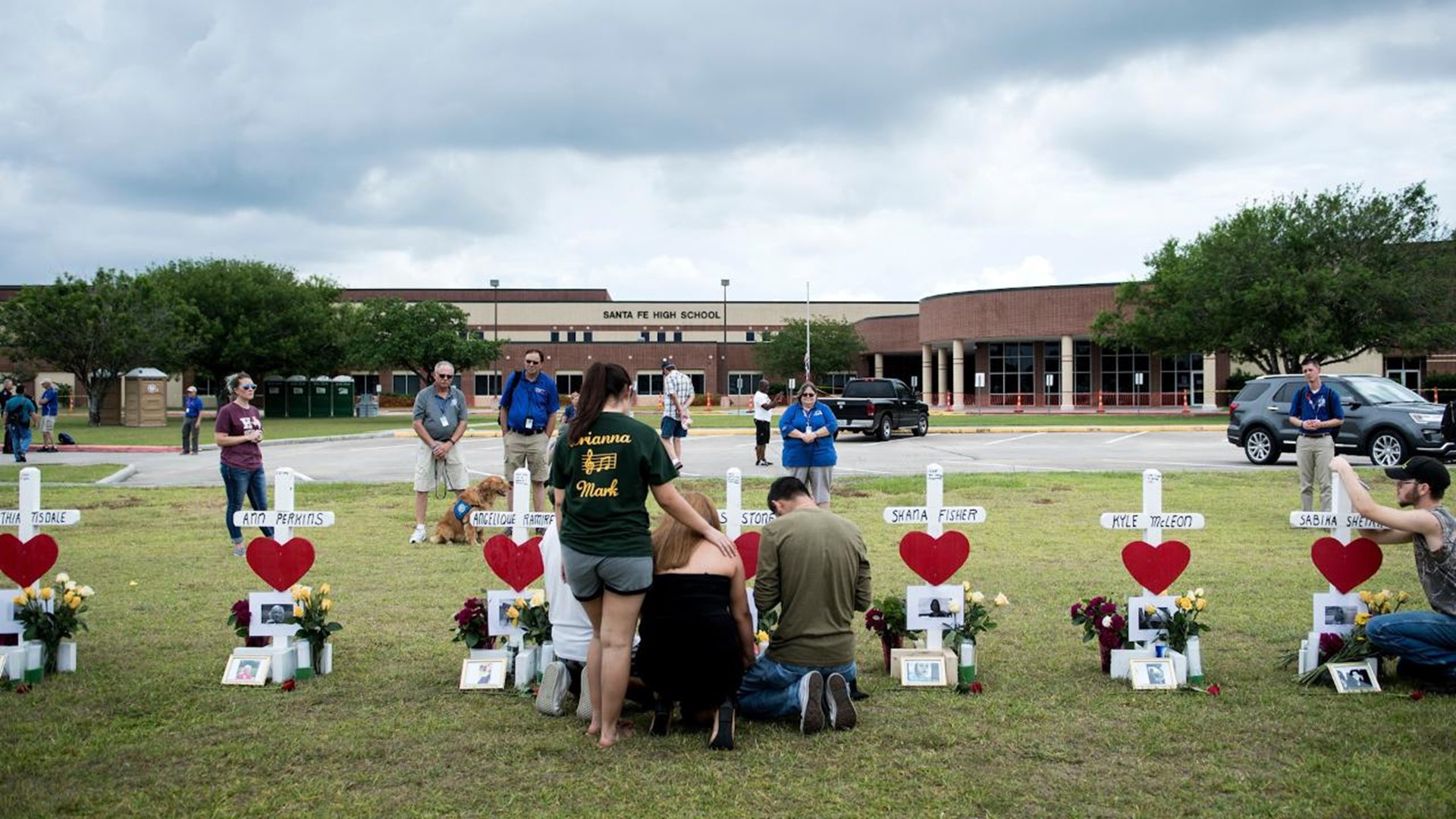 Credit: AP
In this May 18, 2018 file photo, Santa Fe High School student Dakota Shrader is comforted by her mother Susan Davidson following a shooting at the school in Santa Fe, Texas.

But some parents and security analysts say those efforts fall short and are calling for outside security experts to advise the school board and an independent review of the mass shooting May 18 that left eight students and two teachers dead.

“I have lots of concerns,” said Donna Hayes, whose son, Scott, 15, will be a sophomore at the high school. “Basically, we have a failed system that needs to be fixed.”

A Galveston County grand jury  indicted Dimitrios Pagourtzis, 17, this month on charges of capital murder and aggravated assault on a peace officer in the attack that killed 10 and wounded 13.  Pagourtzis, a junior at the high school, allegedly opened fire in art classes using his father’s sawed-off Remington shotgun and a .38 pistol, according to court documents. Police say he admitted to the mass shooting after his arrest.

Credit: Courtney Sacco, Caller-Times, via USA TODAY NETWORK
Ribbons, flags and flowers sit around a tree outside Santa Fe High School in Santa Fe, Texas, on Aug. 19, 2018. The vigil was held the day before the first day of school. On May 18, 2018, eight students and two teachers were killed in a mass shooting.

But the district has focused too heavily on what it will do to respond to shootings rather than on how to prevent them, said Paul Luker, a Texas-based energy security consultant who has worked with some Santa Fe parents to assess security at the school.

The school still lacks a reliable system of processing and acting on cases of bullying and hasn’t released where exactly the system failed as Pagourtzis’ violent intentions  went unnoticed, he said. Luker said he has offered to work with the school to help them meet national guidelines for threat assessments but hasn’t gotten a reply.

School district officials did not respond to multiple requests for interviews for this story.

“Until they make a paradigm shift away from response and focus on prevention, they’re not going to stop these,” Luker said. “They’re just not.”

Jennifer Cooper, 45, whose two sons, ages 14 and 17, will be attending Santa Fe High, said she has been frustrated with how little district officials have shared about lessons learned from the shooting and by the lack of federal oversight on securing the school.

Cooper and other parents have called for an independent review of the incident. School board officials have said they are conducting their own internal investigation, and federal investigators and researchers from Texas A&M University also are examining the incident.

But a true independent study is key, Cooper said. Similar studies were done after school shootings in Parkland, Florida; Littleton, Colorado; and at Virginia Tech, as well as the 1999 Columbine High School shooting in Colorado.

More: There were nearly 1,300 more threats made at U.S. schools this past year, report finds

“You would think a federal agency would swoop in and make sure everything is as secure as possible or tell you what it should be to make it that,” Cooper said. “Instead, we’re placing that burden on school board members.”

Sarah Goodrum, chairwoman of the criminology and criminal justice department at the University of Northern Colorado, co-wrote an independent study of the 2013 Arapahoe High School shooting in Littleton, where a senior at the school shot and killed a classmate before taking his own life.

Goodrum and her team of researchers pored over thousands of pages of school documents and interviewed nine school staffers. The report found a failure to share information about the student’s troubled past, a lack of threat assessments at the school and a failure for the school as a whole to pick up on the suspect’s many warning signs of trouble.

Goodrum, however, said she has mixed feelings about independent studies after every school shooting because the lessons tend to be precisely the same incident after incident: improve threat assessments, create a school climate where students are comfortable reporting on bullying, and make sure those reports are acted upon.

“We’ve already learned the lessons,” she said. “We’re not doing a great job in taking those lessons and using them to improve our process.”

One reason is lack of federal oversight, she said. The federal government should create a “red flag” program, akin to the federal Individualized Education Program where schools are required to report students with learning disabilities and tailor a program that meets their needs, Goodrum said. The new program would flag students with mental health needs or showing a propensity toward violence.

“We don’t yet have a federal mandate in place,” she said. “That will be one piece of the larger puzzle.”

The shooting at Santa Fe High has sparked an increase in parent participation, with parents filling up school board meetings, volunteering for school activities in unprecedented numbers and creating Facebook pages monitoring school improvements.

Credit: Courtney Sacco, Caller-Times, via USA TODAY NETWORK
People attend a vigil outside Santa Fe High School in Santa Fe, Texas, on Aug. 19 2018. The vigil was held the day before the first day of school. On May 18, 2018, eight students and two teachers were killed in a mass shooting.

More: At Santa Fe High School, police had an active-shooter plan. Did it work?

More: Texas high school student: 'You hear boom, boom, boom, and I just ran as fast as I could'

John Conard, whose nephew Jared Black was killed in the attack, is creating a newsletter called SOS (Secure Our Schools) that will invite different viewpoints about how to improve school security. He said he realizes ideas will range from arming teachers to enforcing the dress code – but all are important.

“No matter your politics, everyone wants their kids to come home from school,” Conard said. “We could all agree on that.”

At the campus on Friday, the Santa Fe football team hosted Clear Falls High for an early-evening scrimmage game. As the marching band practiced in the parking lot, families and students streamed into Joe Raitano Field to enjoy some Friday night football before next week’s emotional return to classes.

Kera Oliver arrived to watch her 15-year-old son, Eagan, who plays center on the team. She said she has mostly steered clear from the politics unfolding at school board meetings and trusts that school officials have made campus safer for her son.

Eagan, she said, is eager to return.

1 / 4
KTRK-TV ABC13, AP
In this image taken from video, law enforcement officers respond to a high school near Houston after an active shooter was reported on campus, in Santa Fe, Texas.