Holocaust survivors will commemorate their lost loved ones on Wednesday as the world marks the 76th anniversary of the liberation of Auschwitz-Birkenau. 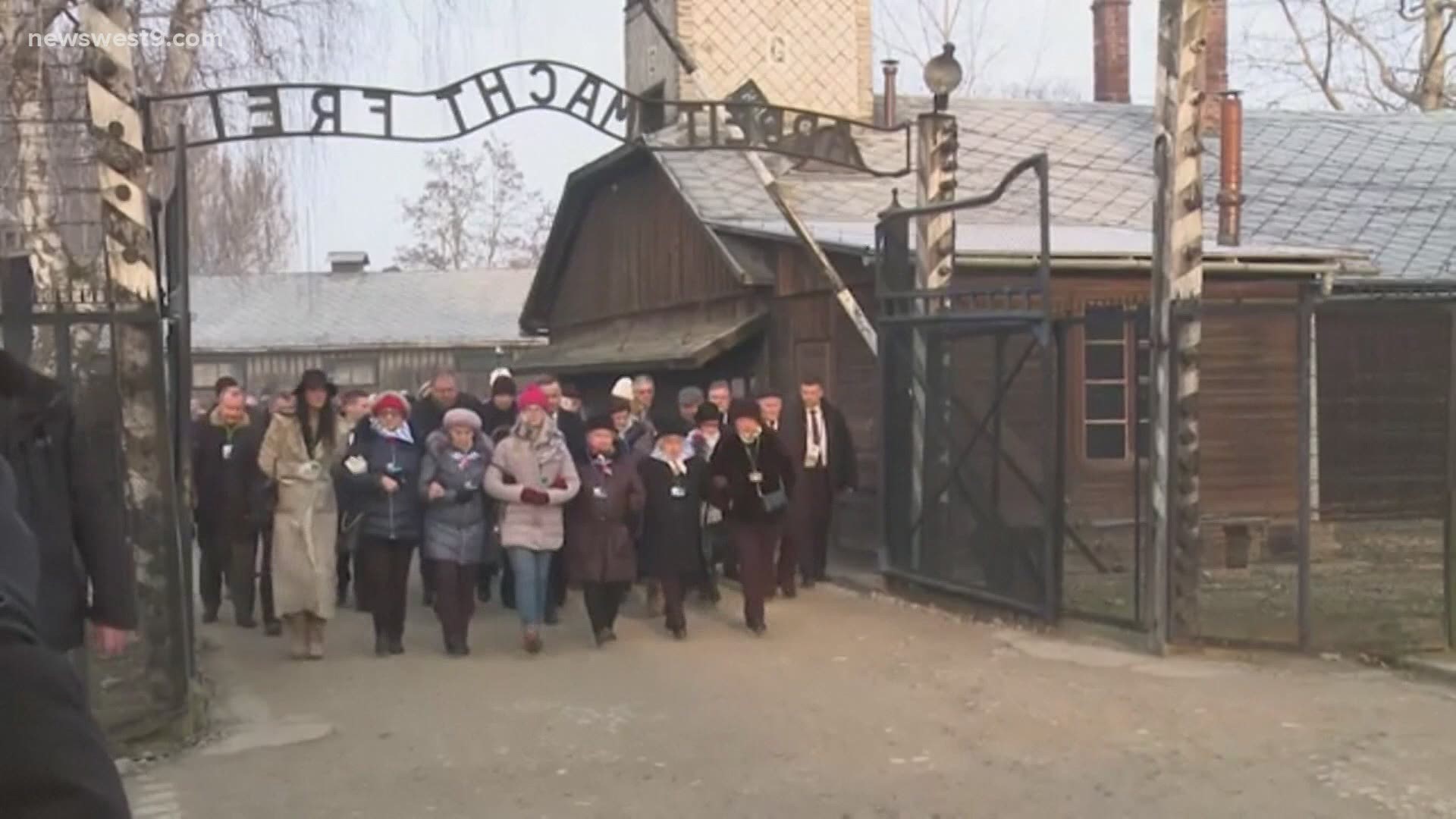 WARSAW, Poland — Tova Friedman hid among corpses at Auschwitz amid the chaos of the extermination camp's final days.

Just 6 years old at the time, the Poland-born Friedman was instructed by her mother to lie absolutely still in a bed at a camp hospital, next to the body of a young woman who had just died. As German forces preparing to flee the scene of their genocide went from bed to bed shooting anyone still alive, Friedman barely breathed under a blanket and went unnoticed.

Days later, on Jan. 27, 1945, she was among the thousands of prisoners who survived to greet the Soviet troops who liberated the camp in Nazi-occupied Poland.

Now 82, Friedman had hoped to mark Wednesday's anniversary by taking her eight grandchildren to the Auschwitz-Birkenau memorial site, which is under the custodianship of the Polish state. The coronavirus pandemic prevented the trip.

So instead, Friedman will be alone at home in Highland Park, New Jersey, on International Holocaust Remembrance Day. Yet a message of warning from her about the rise of hatred will be part of a virtual observance organized by the World Jewish Congress.

Across Europe, the victims were remembered and honored in various ways.

In Austria and Slovakia, hundreds of survivors were offered their first doses of a vaccine against the coronavirus in a gesture both symbolic and truly lifesaving given the threat of the virus to older adults. In Israel, some 900 Holocaust survivors died from COVID-19 out of the 5,300 who were infected last year, the country's Central Bureau of Statistics reported said Tuesday.

Pope Francis warned from the Vatican that distorted ideologies can "end up destroying a people and humanity.” Meanwhile, Luxembourg signed a deal agreeing to pay reparations and to restitute dormant bank accounts, insurance policies and looted art to Holocaust survivors.

Institutions around the world, including the Auschwitz-Birkenau memorial museum in Poland, Yad Vashem in Israel and the United States Holocaust Memorial Museum in Washington D.C. have online events planned. The presidents of Israel, Germany and Poland were among those planning to deliver remarks of remembrance and warning.

The online nature of this year's commemorations is a sharp contrast to how Friedman spent the 75th anniversary of Auschwitz's liberation last year, when she gathered under a huge tent with other survivors and dozens of European leaders at the site of the former camp. It was one of the last large international gatherings before the pandemic forced the cancellation of most large gatherings.

Many Holocaust survivors in the United States, Israel and elsewhere find themselves in a state of previously unimaginable isolation due to the pandemic. Friedman lost her husband last March and said she feels acutely alone now.

But survivors like her also have found new connections over Zoom: World Jewish Congress leader Ronald Lauder has organized video meetings for survivors and their children and grandchildren during the pandemic.

More than 1.1 million people were murdered by the German Nazis and their henchmen at Auschwitz, the most notorious site in a network of camps and ghettos aimed at the destruction of Europe's Jews. The vast majority of those killed at Auschwitz were Jews, but others, including Poles, Roma and Soviet prisoners of war, were also killed in large numbers.

In all, about 6 million European Jews and millions of other people were killed by the Germans and their collaborators. In 2005, the United Nations designated Jan. 27 as International Holocaust Remembrance Day, an acknowledgement of Auschwitz's iconic status.

Israel, which today counts 197,000 Holocaust survivors, officially marks its Holocaust remembrance day in the spring. But events will also be held Wednesday by survivors’ organizations and remembrance groups across the country, many of them held virtually or without members of the public in attendance.

While commemorations have moved online for the first time, one constant is the drive of survivors to tell their stories as words of caution.

Rose Schindler, a 91-year-old survivor of Auschwitz who was originally from Czechoslovakia but now lives in San Diego, California, has been speaking to school groups about her experience for 50 years. Her story, and that of her late husband, Max, also a survivor, is also told in a book, “Two Who Survived: Keeping Hope Alive While Surviving the Holocaust.”

After Schindler was transported to Auschwitz in 1944, she was selected more than once for immediate death in the gas chambers. She survived by escaping each time and joining work details.

The horrors she experienced of Auschwitz — the mass murder of her parents and four of her seven siblings, the hunger, being shaven, lice infestations — are difficult to convey, but she keeps speaking to groups, over past months only by Zoom.

“We have to tell our stories so it doesn't happen again,” Schindler told The Associated Press on Monday in a Zoom call from her home. “It is unbelievable what we went through, and the whole world was silent as this was going on."

Credit: AP
The railway tracks from where hundred thousands of people was directed to the gas chambers to murdered immediately inside the former Nazi death camp of Auschwitz Birkenau or Auschwitz II. in Oswiecim, Poland, Saturday, Dec. 7, 2019. (AP Photo/Markus Schreiber)

Friedman says she believes it is her role to “sound the alarm” about rising anti-Semitism and other hatred in the world, otherwise “another tragedy may happen.”

That hatred, she said, was on clear view when a mob inspired by former President Donald Trump attacked the U.S. Capitol on Jan. 6. Some insurrectionists wore clothes with anti-Semitic messages like “Camp Auschwitz” and ““6MWE,” which stands for “6 million wasn't enough.”

“It was utterly shocking and I couldn’t believe it. And I don’t know what part of America feels like that. I hope it’s a very small and isolated group and not a pervasive feeling,” Friedman said Monday.

Still, the mob violence could not shake her belief in the essential goodness of America and most Americans.

In her recorded message that will be broadcast Wednesday, Friedman said she compares the virus of hatred in the world to COVID-19. She said the world today is witnessing “a virus of anti-Semitism, of racism, and if you don’t stop the virus, it’s going to kill humanity.”