The crowd at the memorial service in New York City chanted 'You are not alone,' before an emotional Terrence Floyd, thanked them for their support. 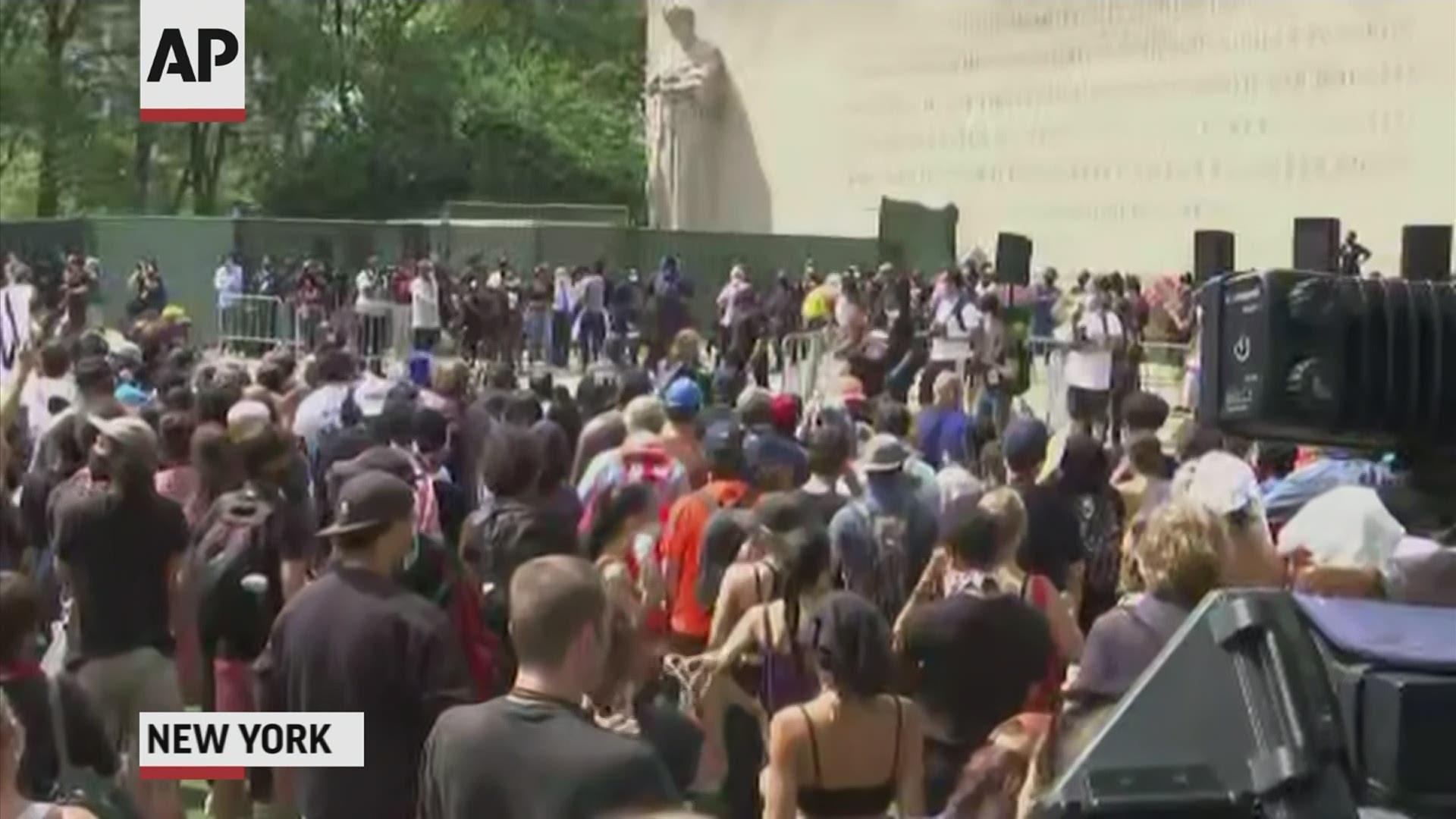 "You are not alone," the large crowd chanted before an emotional Terrence Floyd, wearing a mask and a T-shirt bearing his brother's likeness, thanked them for their support.

“I thank God for you all showing love to my brother,” he said.

Of the demonstrations that have engulfed the city and the nation, and the violence that has taken place, he said, “I’m proud of the protests but I'm not proud of the destruction. My brother wasn’t about that. The Floyds are a God-fearing family.”

Munira Siddiq, 30, of Queens, was overcome with emotion when Floyd spoke, saying she could physically feel his pain standing so close to him.

Credit: AP
The brother of George Floyd, Terrence Floyd speaks to a crowd during a rally at Cadman Plaza Park, on Thursday, June 4, 2020, in the Brooklyn borough of New York

“If even a seed of change comes from this, it will have all been worth it,” she said, before the demonstrators left the memorial site at Brooklyn's Cadman Plaza and marched over the Brooklyn Bridge. “If we don’t do this, nobody is going to.”

Demonstrators had also been in Cadman Plaza on Wednesday night, where videos were taken of officers using batons and pepper spray on protesters who remained after the 8 p.m. curfew.

Gov. Andrew Cuomo and Mayor Bill de Blasio sought to deflect criticism over the harsh tactics. Both Democrats said they had not seen the widely shared videos, but later Cuomo tweeted that he was asking the state attorney general to investigate the incidents as part of her ongoing look into police tactics during the protests.

“Peaceful protest is a sacred American right," Cuomo tweeted. “No peaceful protestor deserves to be hit with a baton and no self-respecting police officer would defend that."

De Blasio spoke at the memorial, with the crowd booing and heckling from the moment he arrived, shouting over him as he urged that Floyd’s death not be in vain. “We have too much to change in this city and this country,” he said.

Even some of the speakers took shots at the mayor, criticizing his management of the NYPD and his administration’s response to the coronavirus.

Credit: AP
Demonstrators march on the Brooklyn Bridge after a memorial service for George Floyd, on Thursday, June 4, 2020, in New York. The death of Floyd at the hands of Minneapolis police on May 25 has prompted ongoing global protests against police brutality. (AP Photo/Ted Shaffrey)

Earlier, de Blasio said police have used “a lot of restraint” overall and added, “but if there’s anything that needs to be reviewed, it will be.”

NYPD Commissioner Dermot Shea defended his officers and the department's overall use of force.

The governor and mayor said protesters should abide by the 8 p.m. curfew put in place earlier this week to deter the violence, vandalism and destruction that followed protests Sunday and Monday nights.

Credit: AP
Protesters gather for a rally at Cadman Plaza Park, Thursday, June 4, 2020, in New York. Protests continued following the death of George Floyd, who died after being restrained by Minneapolis police officers on May 25. (AP Photo/John Minchillo)

“If you are violating the curfew and you refuse to leave so you continue to violate the curfew, the police officers have to enforce the law, which is: you’re supposed to off the street," Cuomo said.

The citywide curfew, New York’s first in decades, is set to remain in effect through at least Sunday, with the city planning to lift it at the same time it enters the first phase of reopening after more than two months of shutdowns because of the coronavirus.

Wednesday night unfolded without the vandalism and smash-and-grab sprees that forced merchants around the city to board their stores up preemptively, but police said a man ambushed officers on an anti-looting patrol in Brooklyn shortly before midnight, stabbing him in the neck. The attacker was shot by responding officers and was in critical condition.

Two officers suffered gunshot wounds to their hands in the chaos, but all three wounded officers were expected to recover.

Officer Yayonfrant Jean Pierre, who was stabbed in the neck, and the other wounded officers, Randy Ramnarine and Dexter Chiu, were expected to recover.

De Blasio said he was “not going to theorize on” possible motives for the attack.

Protests over Floyd's death were planned around the city for Thursday along with a statewide moment of silence at 2 p.m. to coincide with another memorial for Floyd taking place in Minneapolis.