It wasn't as hyped as William and Kate or Harry and Meghan, but in Great Britain, Friday's royal wedding was still a royal wedding. 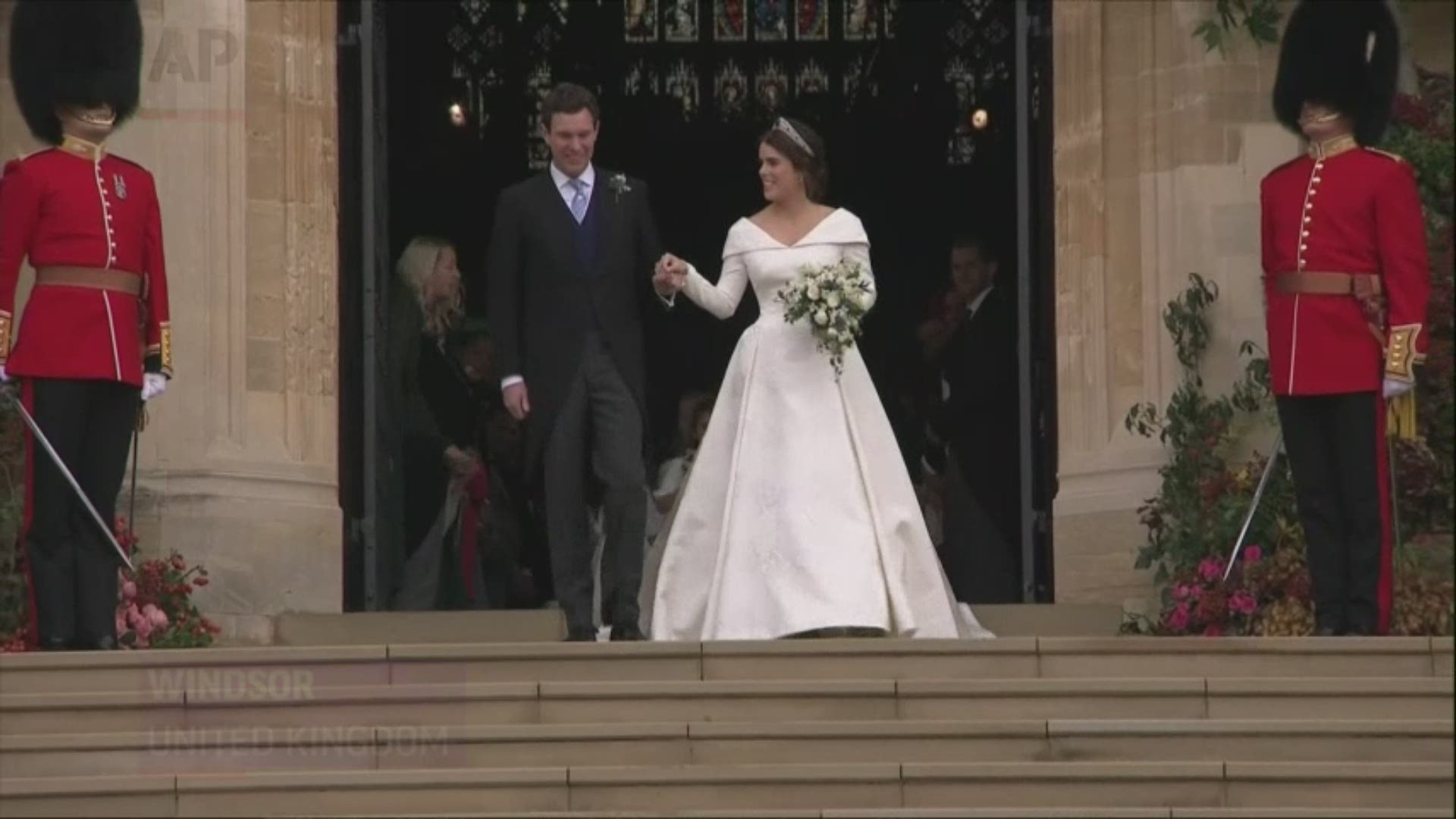 The 28-year-old bride, granddaughter of Queen Elizabeth II, is ninth in line to the British throne. She wore a gown by British designers Peter Pilotto and Christopher De Vos and a diamond and emerald encrusted tiara loaned to her by the queen.

The queen and her husband, Prince Philip, attended the wedding, along with other senior royals, including Prince William and his wife Kate, the duchess of Cambridge, and Prince Harry with Meghan, the duchess of Sussex.

There has been doubts about whether the 97-year-old Philip would be well enough to attend, but he seemed to be in good form during a rare public appearance.

1 / 21
ANDREW MATTHEWS
Britain's Princess Eugenie of York and her husband Jack Brooksbank kiss as they emerge from the West Door of St George's Chapel, Windsor Castle, in Windsor, on October 12, 2018. (ANDREW MATTHEWS/AFP/Getty Images)

There were occasional blue skies on a generally cloudy, gusty day as the royal standard flew atop the Windsor Castle complex, indicating the queen was in residence. The strong winds forced many women to hold on to their elaborate hats as they approached the chapel.

The couple got engaged in January when Brooksbank, 32, proposed during a holiday trip to Nicaragua in Central America. They had dated for seven years. They married in the same venue used in May by Harry and Meghan.

William and Kate's 5-year-old son, Prince George, served as a page boy, and Princess Charlotte, 3, was one of six bridesmaids.

Eugenie, 28, works at a contemporary art gallery. Her sister, Princess Beatrice, served as maid of honor — she read a selection from F. Scott Fitzgerald's "The Great Gatsby" during the service.

They are the daughters of Prince Andrew and Sarah Ferguson, who are divorced but enjoy an amicable relationship. They left the chapel together smiling as the newlyweds embarked on a horse-drawn carriage ride through parts of Windsor.

The queen hosted a champagne luncheon for the guests just after the ceremony, with a second reception planned for the evening.

Eugenie told ITV, which broadcast the hour-long service in Britain, that she was both excited and a bit on edge.

"It's nerve-wracking and a bit scary and all the things that come with getting married, but at the end of the day you get to marry the person you love," she said.

The couple invited 1,200 members of the public to come onto the castle grounds for a closer glimpse of proceedings. There were also crowds of well-wishers on the streets outside the imposing castle.