Graphic video: WUSA9 and other outlets fought for the release of Capitol riot video showing Patrick McCaughey and others crushing Officer Daniel Hodges on January 6. 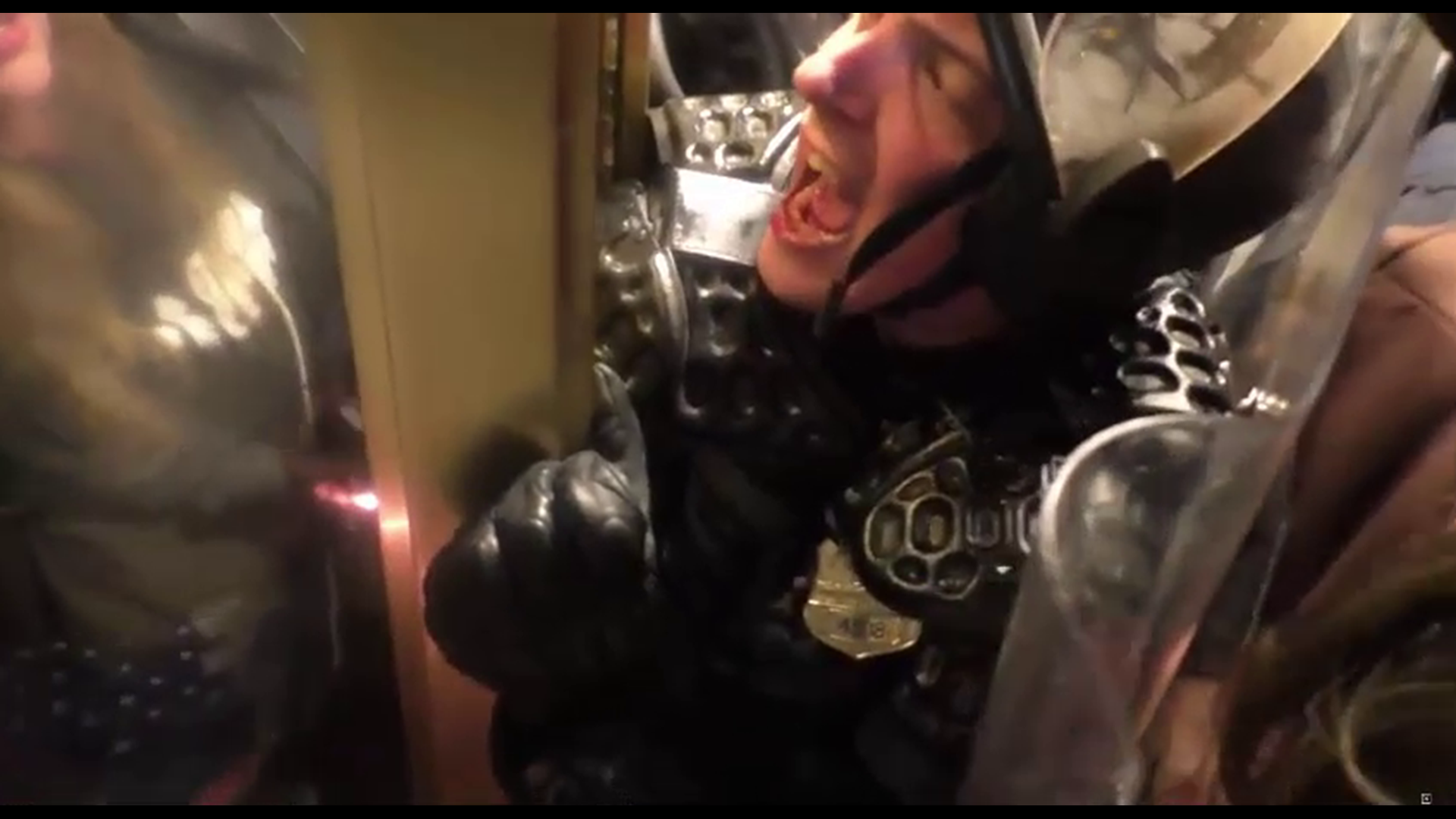 WASHINGTON — New videos from the Capitol riot released Wednesday show a Connecticut man and other members of the pro-Trump mob crushing D.C. Police Officer Daniel Hodges inside the Capitol tunnels.

The videos, four in total, were released following a request to U.S. District Judge Trevor McFadden by WUSA9 and other media outlets.

The footage shows a man federal prosecutors have identified as Patrick Edward McCaughey III and other rioters battling a group of Capitol and D.C. police officers in riot gear. Throughout the video, rioters can be heard yelling at police to, “Pick the right side!” McCaughey himself tells police to, “Just go home!” on multiple occasions.

Roughly a minute into the video, a member of the mob can be seen raising a canister of chemical irritant in the air and spraying a long stream toward police.

Shortly before the 2-minute mark, the crowd begins chanting “Heave, ho!” and aggressively pushing against the police line. At this point, D.C. Police Officer Daniel Hodges can be seen being crushed against a doorframe by McCaughey and other members of the mob while another rioter rips off his gas mask. Hodges, with blood visible in his mouth, screams for help.

McCaughey can then be seen pointing to Hodges and yelling at other officers, “He’s hurt! Let him back!” Moments later, McCaughey picks up a fallen riot shield and begins using it to strike toward Hodges, who is still on the front line, and other officers attempting to help him get away. McCaughey then leans down to hand another fallen riot shield to a member of the mob before police begin pushing the crowd back with baton strikes.

In another short clip released Wednesday, McCaughey can be seen standing outside the tunnel entrance appearing to be suffering the effects of a chemical irritant.

#CapitolRiot arrest: Patrick Edward McCaughey, III, of Connecticut, is accused of using a police riot shield to crush @DCPoliceDept Officer Daniel Hodges against a door during the assault on the Capitol. A friend gave the FBI this selfie McCaughey took at the Capitol. pic.twitter.com/TvDDqhQkB3

Sign up for the Capitol Breach Newsletter. Don't miss an update about arrests, charges or investigations into the assault on the Capitol.

Hodges was one of a number of D.C. Police officers to speak about the riot in the days following it. According to him, while he was being crushed he could hear people yelling at him that he was a traitor.

"We're not the traitors," Hodges said. "We're the ones who saved Congress that day and we'll do it as many times as necessary."

McCaughey was arrested on January 19 in South Salem, New York, but is a resident of Ridgefield, Connecticut. He is charged in a 26-count indictment along with four other men: Tristan Chandler Stevens, David Lee Judd and Christopher Joseph Quaglin. McCaughey himself faces nine counts, including assaulting federal officers using a dangerous weapon, obstruction of an official proceeding and engaging in physical violence in a restricted building with a dangerous weapon. If convicted, he could potentially face decades in prison.