Ever Lopez said he was denied his diploma during graduation because he was wearing a Mexican flag over his gown. The school gave it to him on Monday. 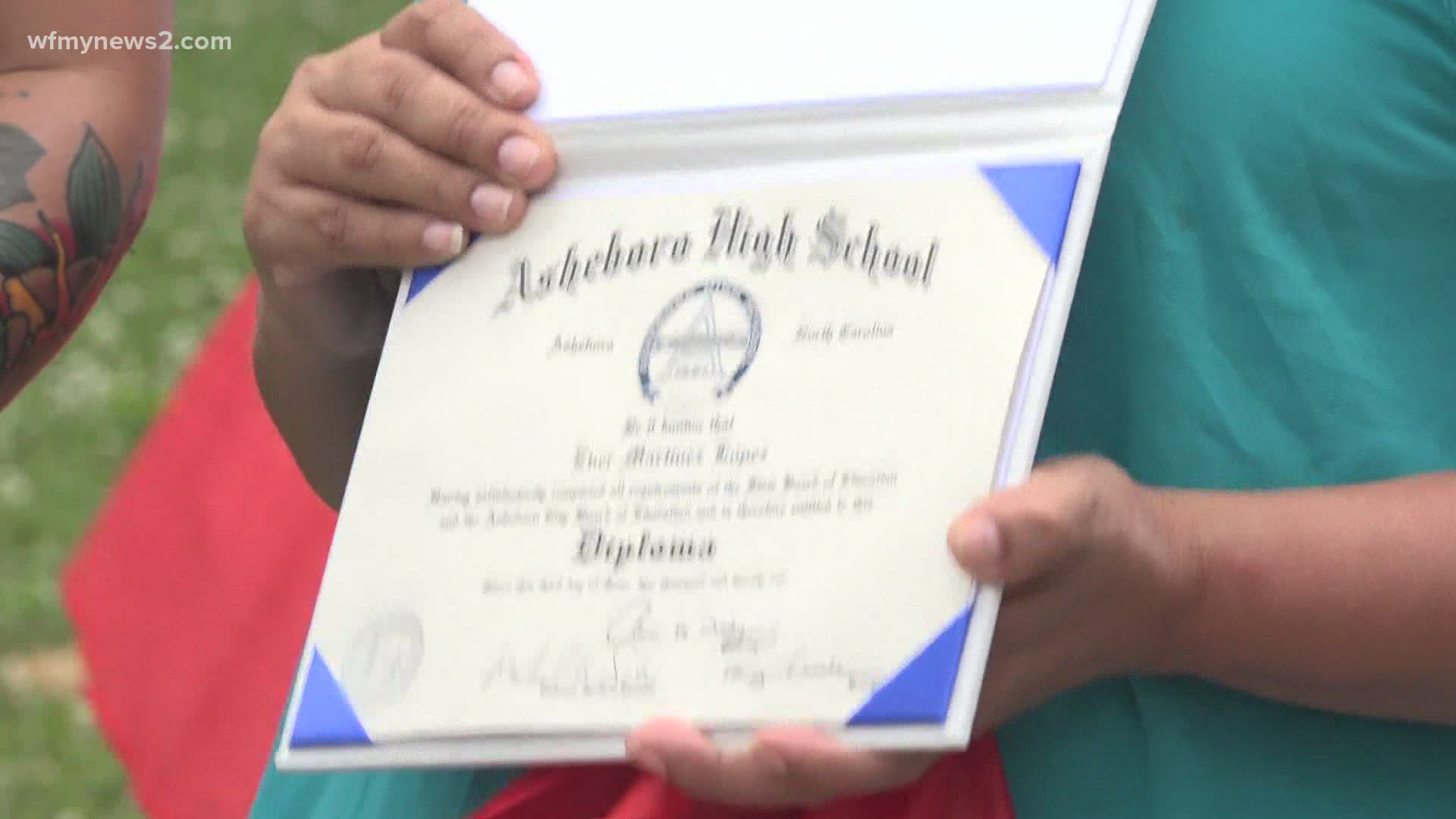 ASHEBORO, N.C. — Ever Lopez, 18, now has his high school diploma after first being denied it during his graduation ceremony.

On Monday, family and community supporters of the graduating senior gathered outside Asheboro High School to address what happened at the ceremony last week. Lopez said he wasn't given his diploma because he wore a Mexican flag over his graduation gown.

Siembra NC, the NAACP, and Lopez's family asked for the school to give Lopez his diploma and to make changes to the dress code policy to be more inclusive of minority students. The family also discouraged any threats being made toward the school system or the principal.

RELATED: 'I'm going to shoot up this school' | Asheboro City Schools threatened after student says he was denied diploma over Mexican flag

Following the press briefing, Lopez and his family went inside the school to sit down with school administrators and have a discussion. The graduating senior left with his diploma in hand.

"I am grateful that I got what I deserved. Like my mom said it is not just mine, it's for everybody that is in this community who was with me and had my back and it really means a lot," said Ever Lopez.

"We are so so proud that he is proud of his roots and where he comes from," said Margarita Lopez, Ever's mom.

The incident at graduation Thursday sparked online protests and calls for the school to give Lopez his diploma.

Video from a member of the audience showed Lopez walking in the line of fellow graduation Class of 2021 members robed in blue gowns.

When Lopez gets to the front where the principal is handing out the diplomas, there is a pause and the line is held up as a conversation ensues.

Then shortly after, Lopez walks away with only his diploma holder but gets applause from the audience.

Lopez said he was told the diploma was not handed to him because of the Mexican flag he was wearing over his graduation gown.

He also said he was told he'd have to apologize. 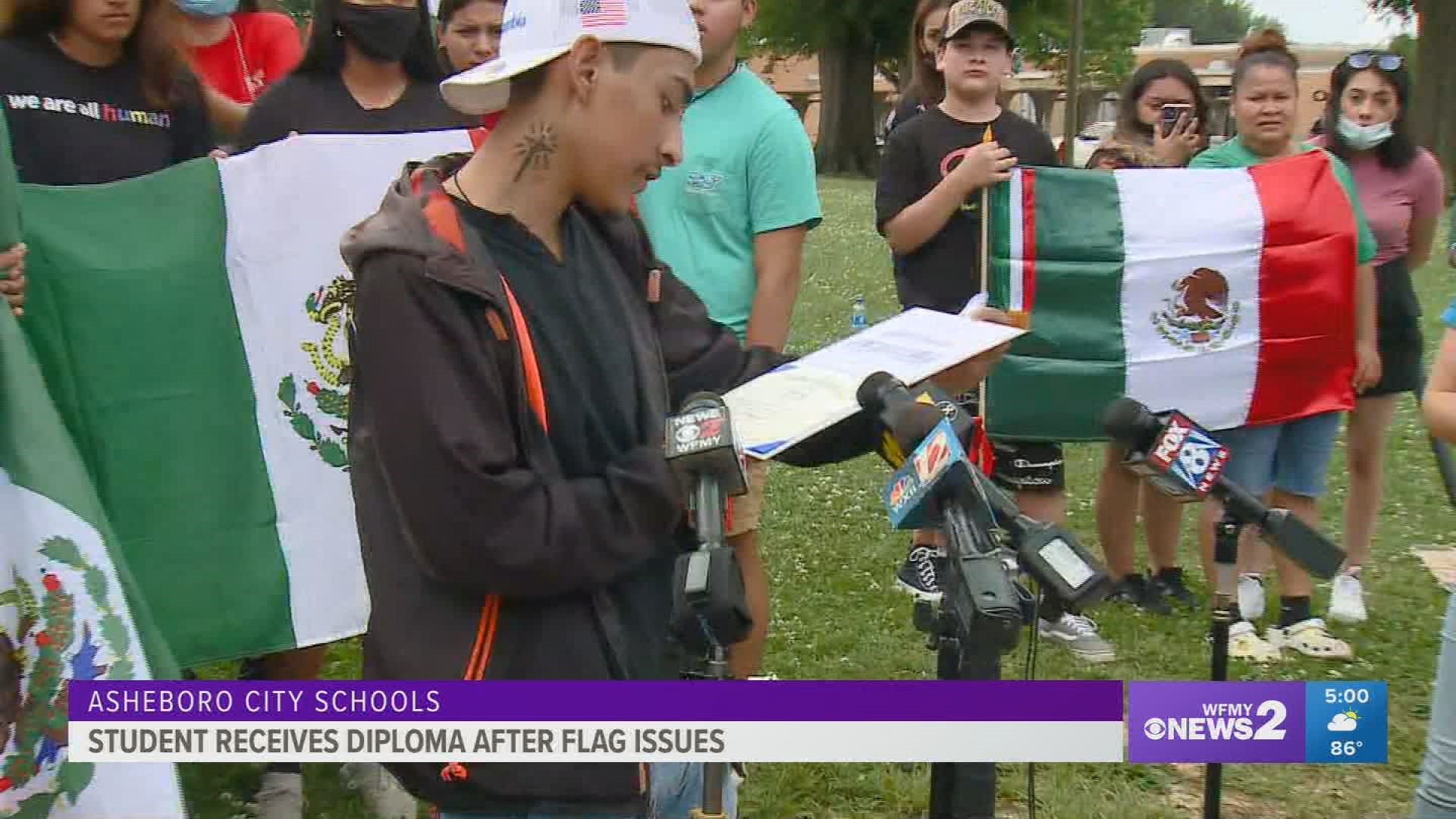 In a statement from Asheboro City Schools, a spokesperson said "the district strongly supports our students' expressions of their heritage in the appropriate time and place."

"Our graduation dress code is clearly shared with students ahead of time and the wearing of a flag of any kind is a violation of the dress code," the statement read.

Lopez said he read the policy but didn't see the reference about flags not being allowed. He also said throughout graduation, no school officials came up to him or pulled him aside to tell him the flag would not be allowed when he walked onto the stage.

A representative of Siembra NC who was part of a joint press conference with the family on Monday said the school district's actions, including calling police to escort the family out, could have been avoided.

"There is a vague policy that was in the book that was not enforced by any other person that night that was there, except for Principal Crooks," said Kelly Morales, Executive Director Siembra NC.

"We know that after the ceremony there was an opportunity to do things differently, to hand the diploma after it was all talked about and that's not what happened," Morales said.

A school district spokesperson said Lopez's diploma had been available for pick up since Friday. However multiple attempts over the weekend to arrange this with the family received no response, according to the spokesperson. The district wished Lopez well on his future plans.

TOP STORY: 'I'm going to shoot up this school' | Asheboro City Schools threatened after student says he was denied diploma over Mexican flag

PHOTOS: Graduating Asheboro High student says he was denied his diploma because of a Mexican flag 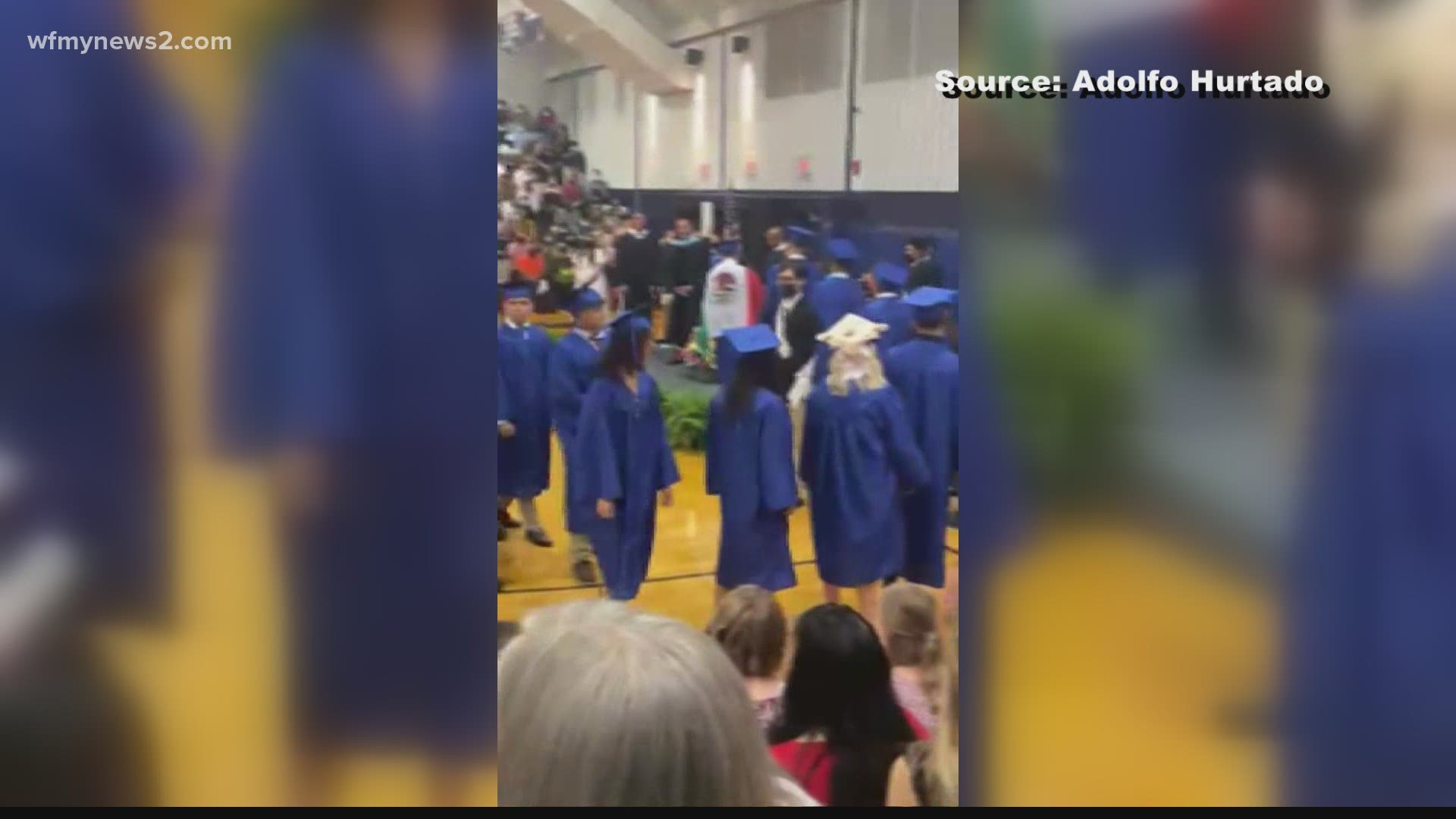 “First and foremost, we strongly support our students’ expressions of their heritage at the appropriate time and place. Our graduation dress code is clearly shared with students ahead of time, and the wearing of a flag of any kind is a violation of the dress code. In the past two years, we have allowed students to decorate their mortarboards as a nod to their individuality and creativity. We are very clear with students that this was the ONLY acceptable deviation from the standard cap and gown regalia. Unfortunately, we will now be reevaluating that decision for future senior classes in light of the situation that occurred last night.

We continue working to resolve this issue with the student and his family so that he will receive his diploma from Asheboro High School. He has worked very hard and we commend him on this great achievement. We are confident in his abilities and we know he has a bright future ahead of him.