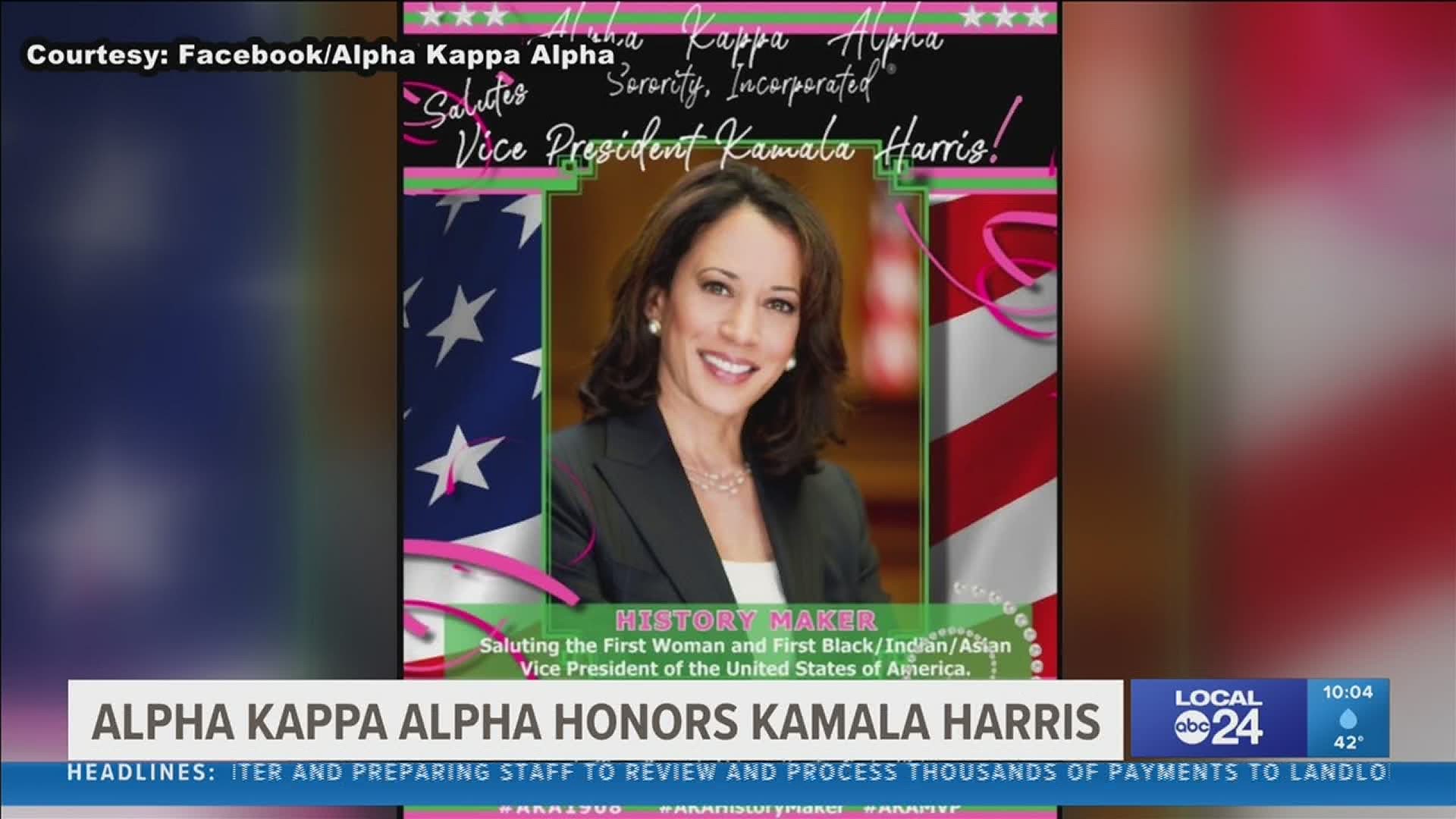 MEMPHIS, Tenn — President Joe Biden pledged to select a woman as his running mate. And, he did. Harris' appointment on the ticket and win is historic on so many levels. Aside from being the first woman to take office as the vice-president, she is the first Black woman and the first South Asian American woman to fill those shoes. She's also a graduate of a HBCU. In addition, she's a member of the first Black sorority, Alpha Kappa Alpha Sorority, Inc. As Weeknight Anchor Katina Rankin tells us, to say her sorority sisters are proud is an understatement.

Kamala Harris making history, becoming the first woman vice-president in U.S. history. She attended a Historically Black College and University, Howard University. She pledged and became a member of the first African American sorority, Alpha Kappa Alpha. International President and CEO of AKA, Dr. Glenda Glover says it's a great day for the sorority and the U.S.

Today we witnessed one of the most historic moments in the history of this country. The swearing-in of our FIRST Female Vice President of these United States of America. The glass ceiling has been broken!! WE SALUTE YOU MADAM VICE PRESIDENT KAMALA HARRIS! #AKAHistoryMaker #AKAMVP pic.twitter.com/K6Wirddv9U

Glover says January 20th was not just historic for African Americans but for every little girl in America. The sorority has declared January 20th as Kamala D. Harris Day.

"If you can see it, you can be it and when they see her it's an inspirational moment," said Dr. Glover.

Harris knows this, tweeting, "I may be the first, but I will not be the last." And recently Harris participated via zoom during the sorority's 113th Founder's Day to talk about the importance of sisterhood nationally and internationally and what Dr. Glover, a Memphis native, means to her.

"I want to tell all my line sisters about Dr. Glover. She has been so incredible in her, her sisterhood and really in so many ways about the tenants of what it means to be a member of being Alpha Kappa Alpha Sorority, Inc. And, I just have to tell you all she has been extraordinary with her support, with her encouragement, with her role of leadership and all in the spirit of sisterhood," said then Vice-President Elect Kamala Harris. "She has been just a rock to me and in the spirit of our sisterhood and our sorority just lifted me up so many times."

Glover says with this new administration, it means lifting everyone up, diversity, inclusion, and hope.

"For women, for America, our democracy this is the moment we have looked forward too," said Dr. Glover.

Dr. Glover says she's been talking with Madame Vice-President Harris about the HBCU agenda. That agenda, she says, includes money for research, infrastructure, stem centers and sustainability through endowments.