How Mid-South members of Congress voted on President Trump's impeachment

Trump is the only U.S. president in history to be impeached twice 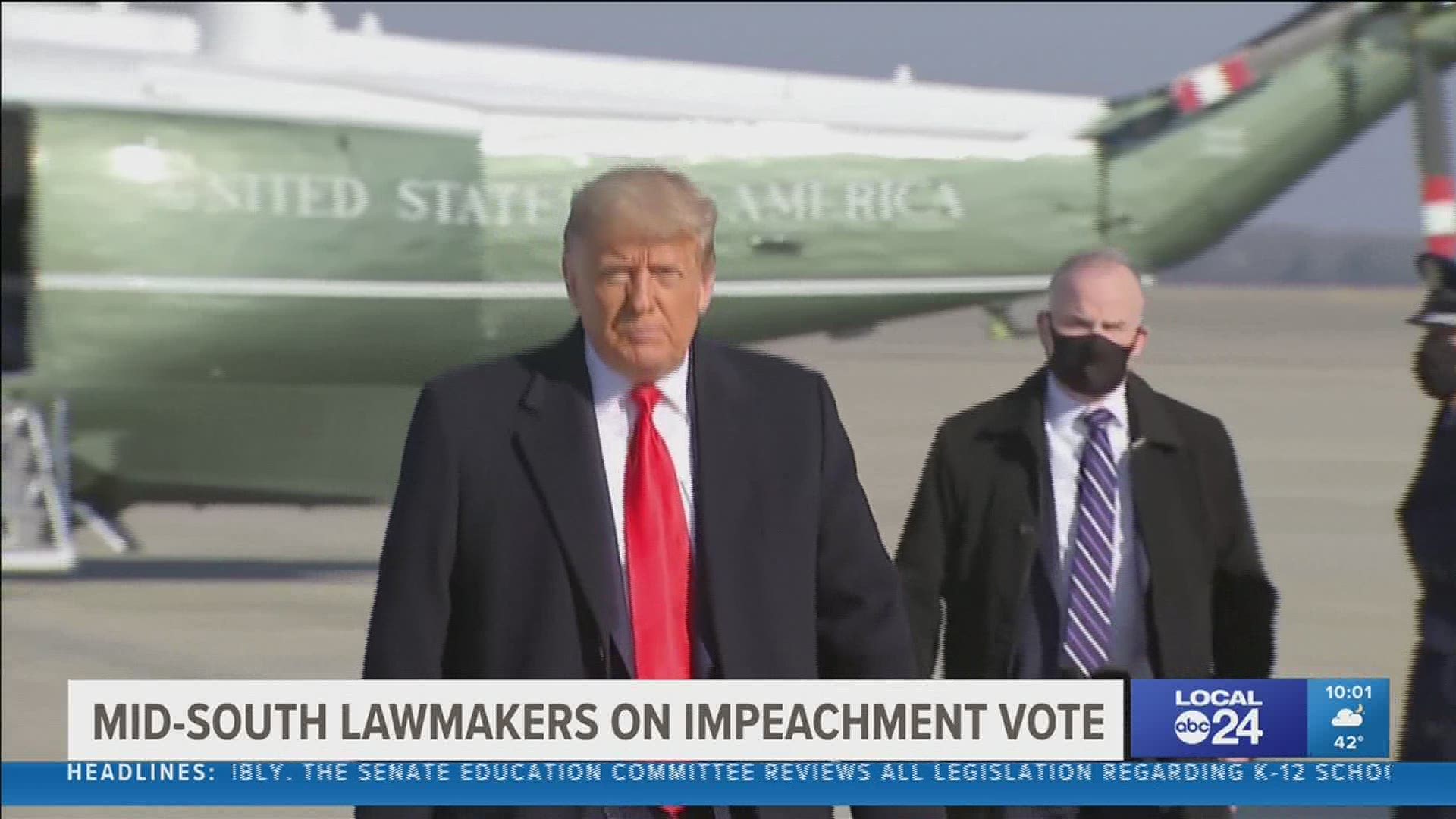 MEMPHIS, Tenn — Wednesday's impeachment vote in the U.S. House of Representatives cemented President Donald Trump's place in the history books. He is the only president to be impeached twice.

During the proceeding, Mid-South members of Congress voted according to their party. However, a big question among Republicans was if impeachment is the right method to hold Trump accountable for his actions of inciting a deadly riot at the U.S. Capitol.

"I do not support this impeachment because rushing and short-circuiting the process of a serious criminal investigation by the House of Representatives would be a risky precedent that could lead to widespread abuse by both parties," Crawford said on Twitter. "We have a responsibility to investigate and present findings and that has not been done. I strongly support immediately appointing a bipartisan commission to investigate all events surrounding the attack on our Capitol."

Crawford continued to say the violent protesters at the U.S. Capitol should be held accountable for their destruction.

"There appears to be evidence that some of the violent protestors came with the intent of doing harm against our government," Crawford said. "If so, then those who chose the path of insurrection should be punished to the fullest extent of the law because that behavior should never be tolerated."

Tennessee GOP Congressman David Kustoff voted "no" saying impeaching the president in his last seven days will only further divide us. He said we must focus our efforts on a peaceful transition of power on January 20.

"There is no doubt every American was shocked by the violent attack on the US Capitol Building last Wednesday. As our country is experiencing this time of turmoil and uncertainty, we must work together to reconcile our differences and heal our nation," Kustoff posted on Twitter. Impeaching President Trump during his last seven days in office would only further divide us as Americans."

This makes Pres. Trump the only US President to be impeached twice. @LocalMemphis https://t.co/GegsKi51f6

Northern Mississippi's GOP Congressman Trent Kelly voted "no" saying "today’s actions in the U.S. House of Representatives are not helpful to our Nation. This is a time for healing, not division."

Northern Mississippi's Democratic Congressman Bennie Thompson voted "yes" saying on Twitter, "President Trump gravely endangered the security of the United States, threatened the integrity of the democratic system, interfered with the peaceful transition of power, and imperiled a coequal branch of Government. He must be impeached & removed now."

Memphis Democratic Congressman Steve Cohen voted "yes." In a heated speech, he said Trump didn't learn his lesson the first time he was impeached and he fears the violence isn't over.

"Intelligence reports indicate that the people he says he loves and are special are going to attack this city and attack this Capitol next week," Cohen said. "I most fear January 20. I think he will try to go out with a bang and take attention away from Joe Biden."