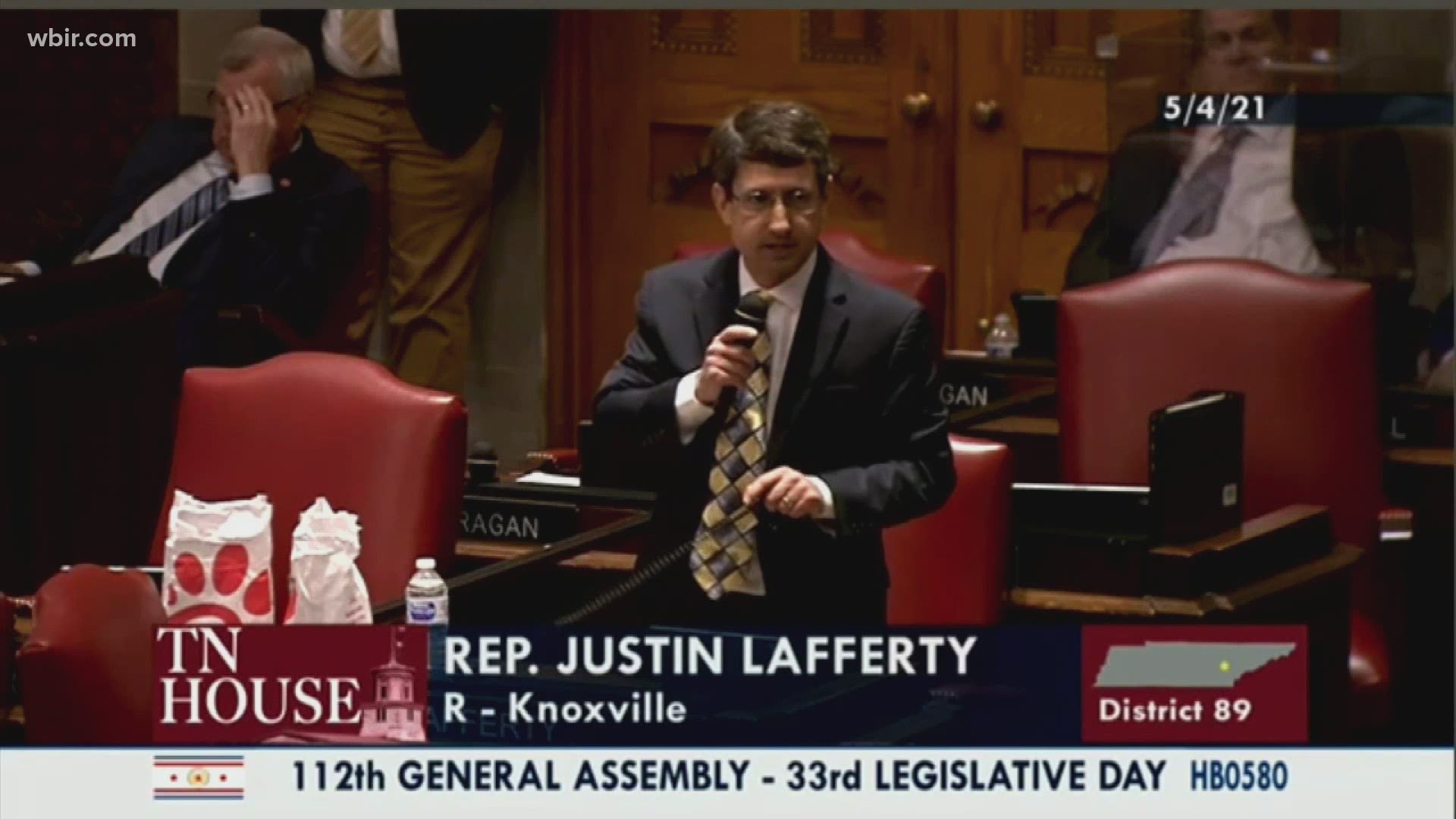 NASHVILLE, Tenn. — State Rep. Justin Lafferty (R - Knox County) took up a microphone Tuesday on the House floor for an impassioned speech on SB 0623. The bill came under controversy after an amendment was introduced to its House version which would prevent teachers from giving lessons on systemic racism.

The amendment would also require discussions and instruction on U.S. history to be impartial, including lessons on slavery and the Three-Fifths Compromise. Schools that are not impartial, or that teach about racial issues, would lose funding.

Lafferty spoke about the representation of history in classrooms across the U.S. During the speech, he questioned why educators focus on some aspects of history, such as the Three-Fifths Compromise, instead of the technological advancements and other achievements in the country's history.

His comments attracted controversy across social media, specifically for his comments on the Three-Fifths Compromise. According to The Editors of Encyclopaedia Britannica, it was an agreement between northern and southern states in 1787 that said three-fifths of the slave population would be counted for representation in the U.S. House of Representatives.

"The Three-Fifths Compromise was a direct effort to ensure that southern states never got the population necessary to continue the practice of slavery everywhere else in the country," Lafferty said during the speech.

He made the comment after several minutes of intense examination of the Revolutionary War, recounting how many early policymakers' decisions were meant to ensure that the resources of southern states continued to fuel the war effort.

"They [Britain] wrapped the entire globe," he said. "We were a speck on a cow's butt that stood up and told them, 'We're not going to take your garbage anymore.'"

He continued to speak about the founding fathers' written opinions of slavery. In those written opinions, he said the Founding Fathers condemned slavery and agreements with slaveholding states were pragmatic moves to guarantee a future for the U.S. without slaves.

Specifically, Lafferty said that by limiting the number of representatives in slaveholding states, founding fathers meant to ensure the practice would not spread across the U.S.

"We ended up biting a bitter, bitter pill that haunts us today and we did it to lay the foundation for all this that we enjoy in this country," he said. "They did it for the purpose of ending slavery well before Abraham Lincoln, well before the Civil War."

It wasn't until the end of the Civil War and the ratification of the 13th Amendment, in December 1865, that the practice of slavery would end in the U.S. — more than 80 years after the Three-Fifths Compromise. More than 620,000 Americans died in the Civil War.

Lafferty's comments attracted ire across social media. Many users said that the lawmaker was inappropriately telling Black Americans about their own history, while others claimed that the speech was an attempt to rewrite the history of the Three-Fifths Compromise.

Many social media users also said that the notion that the Three-Fifths Compromise was meant to end slavery was absurd. Representative Gloria Johnson (D - District 13) posted about the comments with the phrase "Every. Damn. Day #anewlow."

"Talking about incorporating another view of history while ignoring the very writings that we have access to is no way to go about it. Start with the truth," Lafferty said towards the end of his speech. "I say this only because I'm tired, y'all. The people of this nation are tired. If you start looking for trouble, I guarantee you, you're going to find it."

The Knox County Democratic Party also asked Rep. Lafferty to step down as the Chair of the Higher Education subcommittee following his comments.

"Rep. Lafferty's statement about how the Three-Fifths Compromise was designed to end slavery was alarming but the real insult was when the House Republicans clapped for him when he finished his diatribe," said Representative Antonio Parkinson, the Black Caucus Chair. "What I appreciate about his soliloquy is the fact that he gave us his truth, his rationale as to why he was supporting the amendment to force teachers through law to whitewash historical events. This is exactly what needs to happen in our state. There is a need to have a conversation in truth in order to move our state forward."