Several new laws take effect July 1 in Mississippi, including one that will allow home delivery of liquor, wine or beer from local stores. 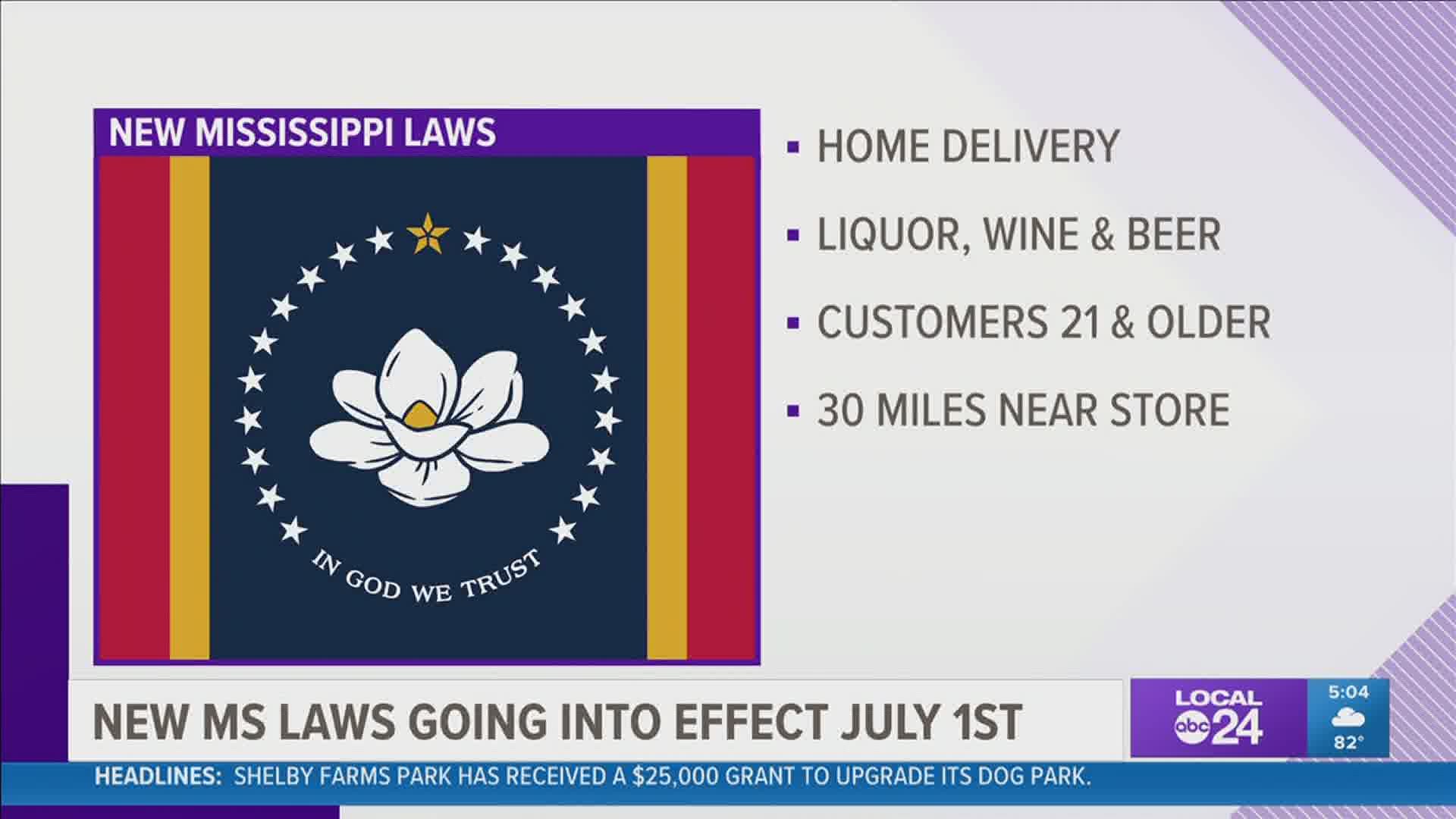 JACKSON, Miss — Several new laws take effect July 1 in Mississippi, including one that will allow home delivery of liquor, wine or beer from local stores.

The deliveries are authorized by House Bill 1135. Buyers will have to prove they are at least 21, delivery people will have to be at least that old and deliveries cannot be made to any person who "appears intoxicated." The new law specifies deliveries may only be made within 30 miles (48.3 kilometers) of the store selling the alcohol, and they may not be made in dry cities or counties.

Some other new laws signed by Republican Gov. Tate Reeves:

ELECTIONS — Mississippi already requires people to decide months in advance if they are going to run for a long list of offices, including governor, state senator, state representative, sheriff, county supervisor, tax collector or state Supreme Court justice. The qualifying deadline has been March 1. A new law moves it to Feb. 1. The change is in House Bill 1048. The earlier deadline is especially significant in state House and Senate races. Legislators are in session from January through March. Some incumbents will go to extremes to try to avoid attracting an opponent during the final weeks before candidates' qualifying deadline, either being extra cautious so they won't draw attention or extra showy so they will.

OPEN MEETINGS — Mississippi is adding to the list of reasons that elected officials may go into closed session to discuss public business. House Bill 1323 allows executive sessions for boards to discuss plans to combat human trafficking or commercial sexual exploitation of children. The existing list of allowable reasons for executive sessions includes discussion of personnel matters, land purchases or lawsuits.

AUTOPSY RECORDS — A new law restricts access to photographs, videos, audio recordings made during an autopsy or made by a coroner or medical examiner at a crime scene. House Bill 70 says a surviving relative such as a spouse, parent or adult child may have access to the records, but others may not see, hear or copy the records without direct supervision of the custodian of the records or his or her designee.

DENTAL CHARITY — Dentists will be immune from being sued for providing charitable care, under House Bill 72. They will join physicians, physician assistants and certified nurse practitioners, who were already shielded from civil liability in such circumstances.

PROFESSIONAL LICENCES — People who move to Mississippi from other states will be able to maintain their professional licenses. House Bill 1263 requires licensing boards to issue occupational licenses for professions without new testing or classroom training if a person held a license in good standing from another state for at least one year. This covers nurses, architects, engineers and others. Licensing boards will also be required to issue licenses if people have worked at least three years in a state that did not require a license for their professions.

TRIBAL IDENTIFICATION — A new law says a photo identification card from any federally recognized Native American tribe is an acceptable form of I.D. for financial transactions or other business. For example, it can be used to prove a person's residency to obtain a fishing license or to prove that a person is old enough to buy a lottery ticket. The details are in House Bill 277.

SPECIALTY LICENSE PLATES — Mississippi residents love to complain about the high price of car tags, but many are willing to spend extra money for a tag that identifies their favorite school, profession, cause or hobby. The new specialty tags that legislators authorized this year include those for Indianola Academy, Humphreys County High School, the South Pike School District and the Picayune Maroon Tide Touchdown Club. The new list in  House Bill 374 also includes tags for Shriners, retired judges and veterans of Operation Desert Shield and Operation Desert Storm.