The State Capitol Commission voted Thursday to move the Confederate general and KKK leader's bust to the Tennessee State Museum. 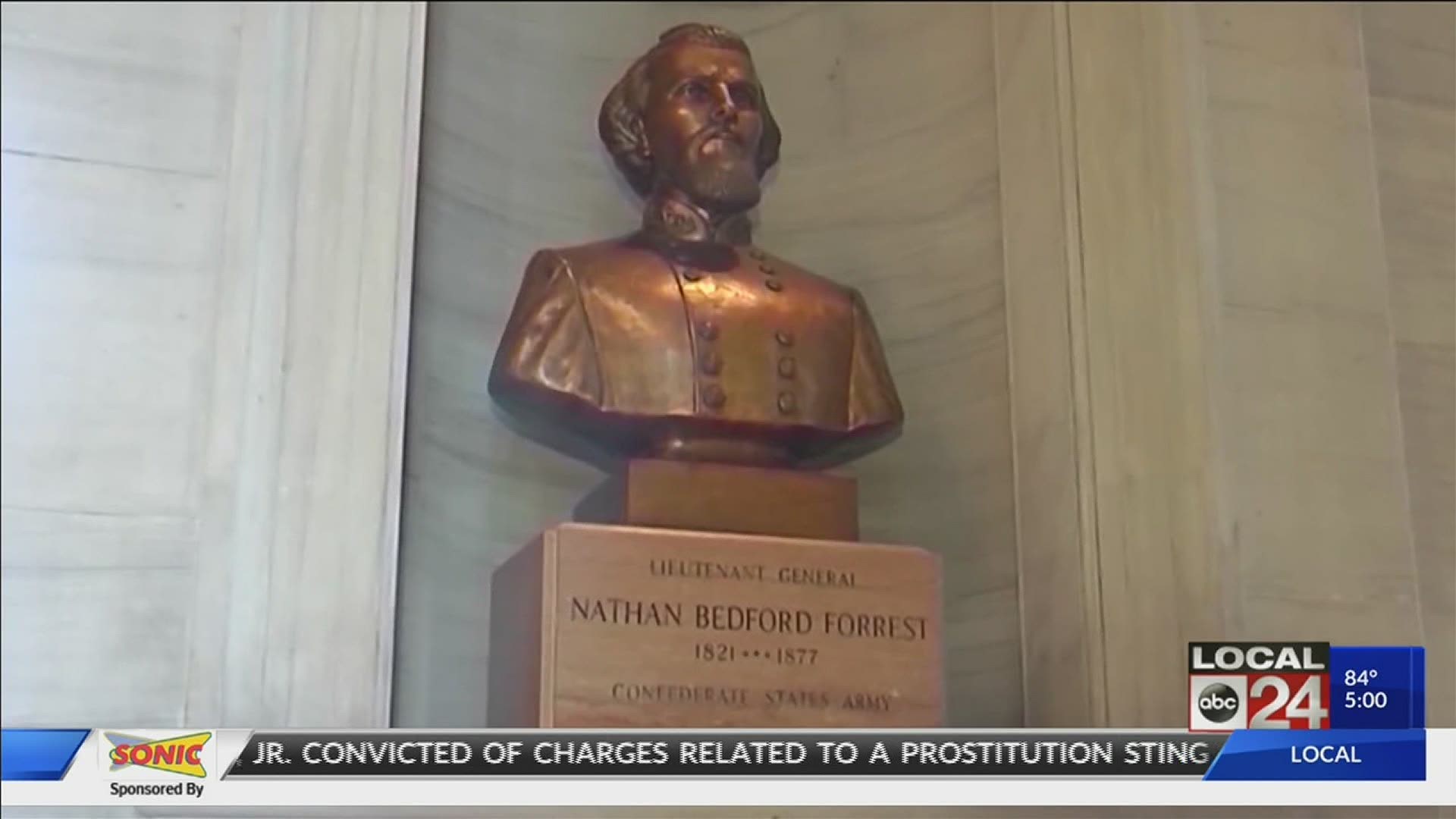 In a move to support racial reconciliation, the State Capitol Commission, which oversees monuments in the Capitol Complex, voted to move the bust to the Tennessee State Museum in Nashville. Commissioners said it's important for people to see Tennessee's history in full context without erasing history.

"I commend members of the State Capitol Commission for taking up the Nathan Bedford Forrest bust issue and arriving at a thoughtful resolution that provides important historical context for the bust at the State Museum," Governor Bill Lee said. "Scripture implores us to live in peaceful and unity, and I believe today’s actions reflect this and our commitment to remembering all parts of our past."

In order to finalize the decision, the State Historical Commission would also need to vote in favor of moving the bust. The commission also voted to approve an amendment to move the busts of Civil War hero and U.S. Navy Admiral David Farragut and Admiral Albert Gleaves from the capitol to establish a Civil War exhibit in the museum.

Some commissioners who supported removing the Forrest bust had reservations with the amendment, saying they worried it could impede the Historical Commission's future decision.

If the Historical Commission approves the measure, the next step would be to decide which historic figures would fill the three vacant spaces in the capitol. One lawmaker suggested looking at women who made large impacts on Tennessee's history.

The voices, cheers and chants of protesters outside the meeting in the Tennessee Tower could be heard as legislators and others told the commission why they felt the bust should be moved to the state museum or kept in the capitol.

Knoxville's Hallerin Hilton Hill is on the commission and was part of the majority vote. Hill said that moving the busts to a museum offers a better understanding of its history.

"We have this $160 million Smithsonian quality museum that puts all of this in context," he said. "It has a permanent exhibit dedicated to reconstruction in the Civil War and within that is a permanent collection dedicated to the Confederate side of what happened. That's different from tearing down the statue, melting it, putting it into storage. This is moving it into a context where you will understand the whole history of it."

Hill spent months researching the life of the confederate general and Forrest's reconciliation later in life struck him.

In a museum, the full complexity of Forrest's role in history can be explained and better understood.

Proponents and opponents have clashed for decades over the bust. Forrest was a Confederate cavalry general who amassed a fortune as a plantation owner and slave trader in Memphis before the Civil War.

The bust has been in the capitol since the late 1970s, and Black Tennesseans protested its presence as a symbol of hatred since the decision was made to place it there.

Governor Lee said Wednesday he wished to see the bust moved out of the capitol, saying its current location created tension between heritage and symbolism -- saying "symbols matter."

As for why the statue was put up in the first place, a state lawmaker said the idea came from the existing bust of Admiral David Farragut. Farragut, a Tennessee native, was a hero of the United States Navy during the Civil War. The lawmaker thought if a Civil War hero for the United States had a statue, so should the Confederacy.

After 42 years as a source of division, the bronze likeness continued to spark controversy in the state legislature.  In June, a house committee voted down a bid by Rep. Rick Staples (D-Knoxville) that would have suggested the capitol commission remove the bust of Forrest and replace it with someone more deserving.  The rejecting vote was 11-5 with all nay votes from Republicans and the supporting votes from four Democrats and one Republican.

Some have defended Forrest's reputation by claiming he changed some of his opinions on race and slavery late in life. Opponents note the statue is not of an elderly Forrest reflecting on the err of his ways.

Forrest was known as a bold military tactician who wreaked havoc on United States forces. He was also known for his involvement in the massacre at Fort Pillow, an atrocity where around 300 black soldiers were killed after they surrendered.

Forrest's nickname as a skilled cavalryman was "the wizard of the saddle." This moniker was used to name him the first "grand wizard" of the KKK in 1867.

RELATED: TN governors will no longer have to issue proclamation honoring Confederate general