The University of Arkansas at Pine Bluff (UAPB) spirit squad has 75 members this year and everyone is fully vaccinated. 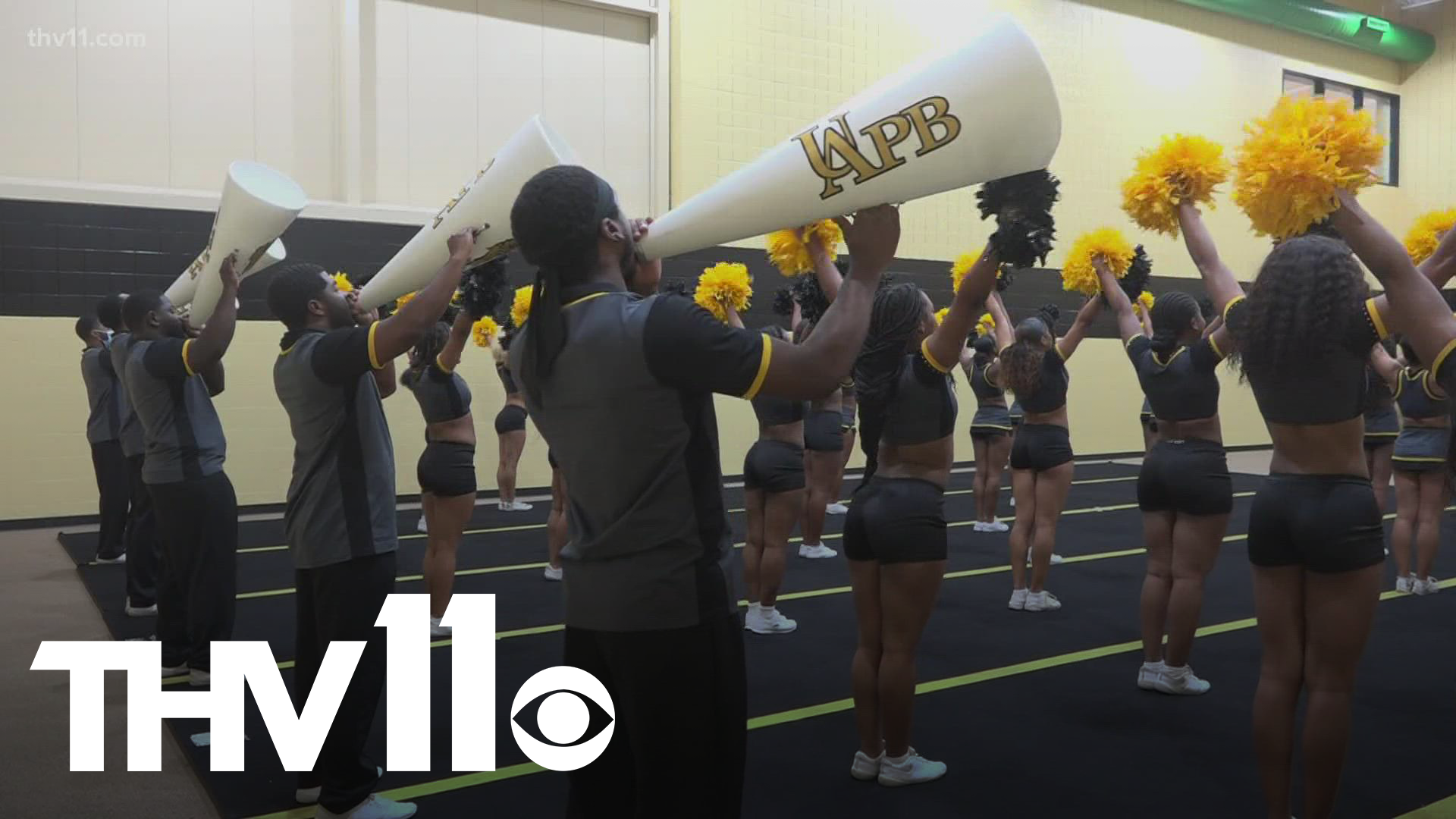 PINE BLUFF, Ark — As Arkansas works to overcome COVID-19 vaccine hesitancy, one group is proving that it can be done. The University of Arkansas at Pine Bluff (UAPB) spirit squad has 75 members this year and everyone is fully vaccinated.

They've been vaccinated for the last two weeks, but the challenge set in place by the Director of Spirit Coordinator Karen Blunt didn't come easy.

Blunt said she's very blunt with her leadership approach for the spirit team.

Camp started Aug. 1 and will go on for three weeks consisting of early morning runs and exercising at 5:30 a.m. With the exception of lunch and dinner, their days end around 10:30 p.m.

Last year the spirit team didn't get to do anything physically in person because of COVID. They sat out a whole season.

Blunt said she's never sat out a whole season in her 31 years at the school.

"The vaccine rate is very low here in Arkansas. It's very low in Pine Bluff and I was told it was very low on the campus," said Blunt.

She wanted to challenge the spirit team to get vaccinated. She's lost people personally in her family.

"We have spent all of this relentless time in camp and the money that it takes to carry on a team like this, for us to get to the first ball game and we have to be tested and somebody's positive it's over. We don't get to cheer. We don't get to perform," said Blunt.

She said the new school protocol for organizations and teams is that if they're 100% vaccinated they won't be subject to rapid COVID-19 testing.

Her mother was anti-vaccine but Humphrey decided she wanted to get the COVID-19 vaccine to help prevent others around her from getting sick. pic.twitter.com/yxZf3pTdsW

The last person to get vaccinated on the team was sophomore nursing major, Tykari Humphrey.

"When I heard about the vaccine, I wasn't with it, because my mom was anti-vaccine," said Humphrey.

Her mother died in November from a heart attack in her sleep. It was the result of a blood clot. She's the youngest of four and she said her mother called her the strongest child.

"Her remarks constantly before she passed, 'You're strong. I don't know how or why you're so strong and I can see you going to school to be a nurse.' So when she did pass in November I had to come to school in January. Those are the things that just play in my mind all the time. Just keep pushing," said Humphrey.

It's a choice she had to make as a young adult, whether or not she'd be vaccinated.

Blunt said she had conversations with Humphreys for a while to discuss how she was feeling about the decision.

Humphrey said it's because COVID is real.

With the support of Blunt, she went to get the vaccine. Humphrey says it took a full week to recover from a sore body, being dizzy and her hands swelling up.

Humphrey just had to get over the fear of getting the vaccine in order to get back to doing what she loves, which is cheer.

"I did freak out. I did have a panic attack cause I've never had a shot before so that was something different," said Humphrey.