A video clip viewed millions of times leaves out some important context from an interview with White House Press Secretary Kayleigh McEnany. 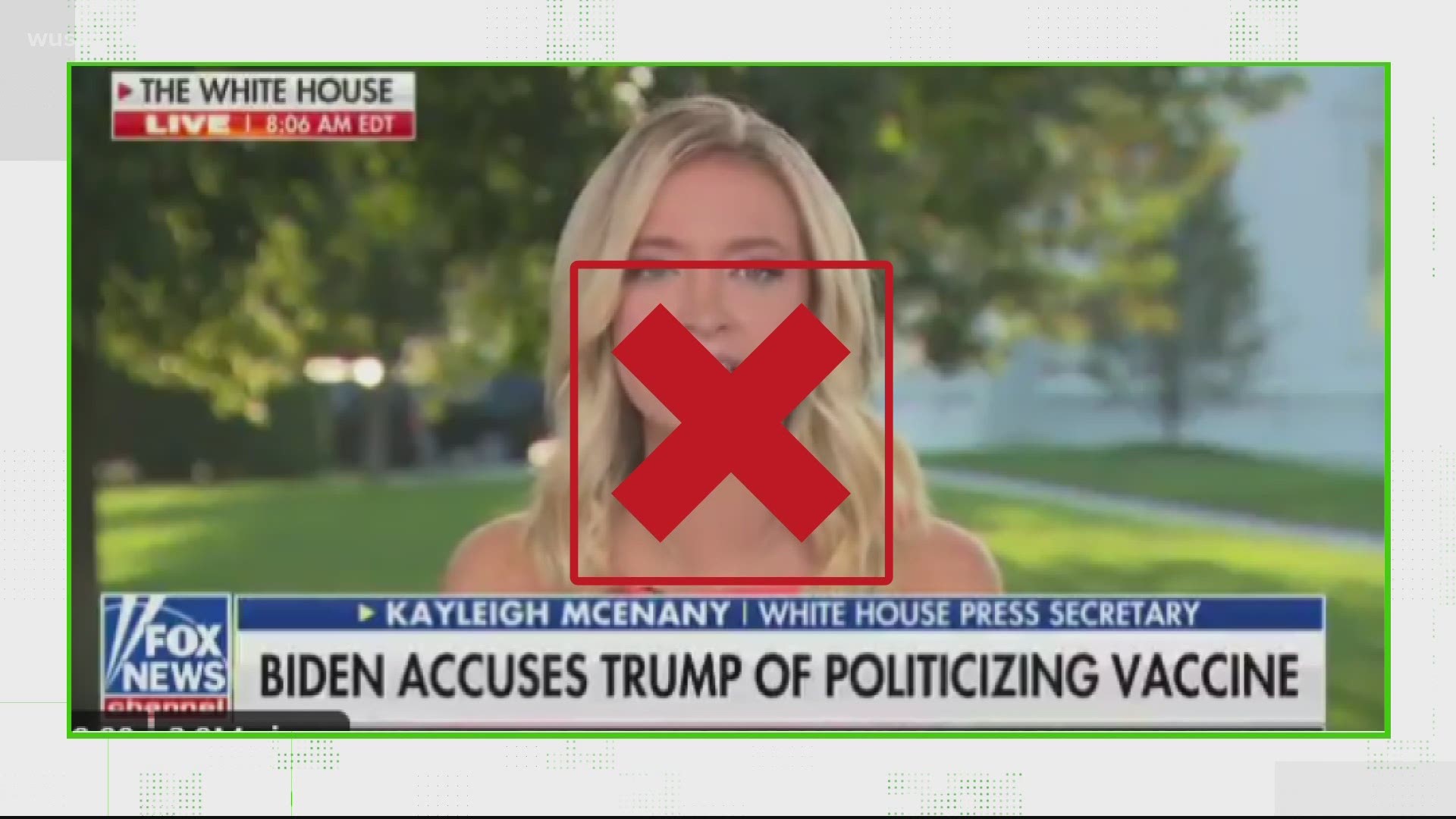 WASHINGTON — It's easy for video clips that lack the context to go viral online. We've seen this become increasingly common as we edge closer to the November election. The Verify team is hard at work digging in and finding that necessary context.

QUESTION: Did the White House Press Secretary say that the Obama Administration promised a COVID-19 vaccine?

ANSWER: No. This claim comes from a video that lacks context.

That morning, Vox.com reporter Aaron Rupar tweeted out a clip from McEnany's interview in which she says on vaccine development, "compare that to Obama/Biden where they promised a vaccine, they vastly underperformed."

The video quickly spread online, garnering almost 3 million views at the time this article was published. With that spread came tweets claiming that McEnany said that President Obama had promised a vaccine for COVID-19.

Tweets, like those below, correctly stated that this is impossible since COVID-19 was discovered almost three years after President Obama vacated the Oval Office. However, the Verify team found that, broadly, these claims are false.

Good morning, @PressSec — as you know, the coronavirus appeared in the US for the first time in 2020. Why did you just lie and say that Obama and Biden promised a vaccine? President Obama left office in January 2017. Those are facts. You are lying. https://t.co/Xg4rla39ke

We traced that clip back to the original 7 minute long Fox & Friends interview and found that there is some necessary context that was cut out of this viral video clip.

In her next sentence, McEnany references the 2009 H1N1 Swine Flu pandemic.  It becomes clear that she is referencing the H1N1 vaccine, not the vaccine for COVID-19.

"Compare that to Obama/Biden where they promised a vaccine, they vastly underperformed," McEnany says. "And you have Biden’s advisor back in the Obama/Biden days saying, ‘It’s a pure miracle, fortuity, that Swine flu wasn’t a mass casualty event of our time.'"

So we can Verify that while McEnany did reference Obama "promising a vaccine" in a recent Fox & Friends interview, she did not specifically refer to the COVID-19 vaccine.

RELATED: VERIFY: Herd immunity is not a strategy to deal with a pandemic. It is a concept

Sign up for the Get Up DC newsletter: Your forecast. Your commute. Your news