VERIFY Weekly: Protesting at the Olympics

Athletes participating in activism is nothing new. Here’s a look at what is and isn’t allowed when it comes to demonstrating at the Olympics. 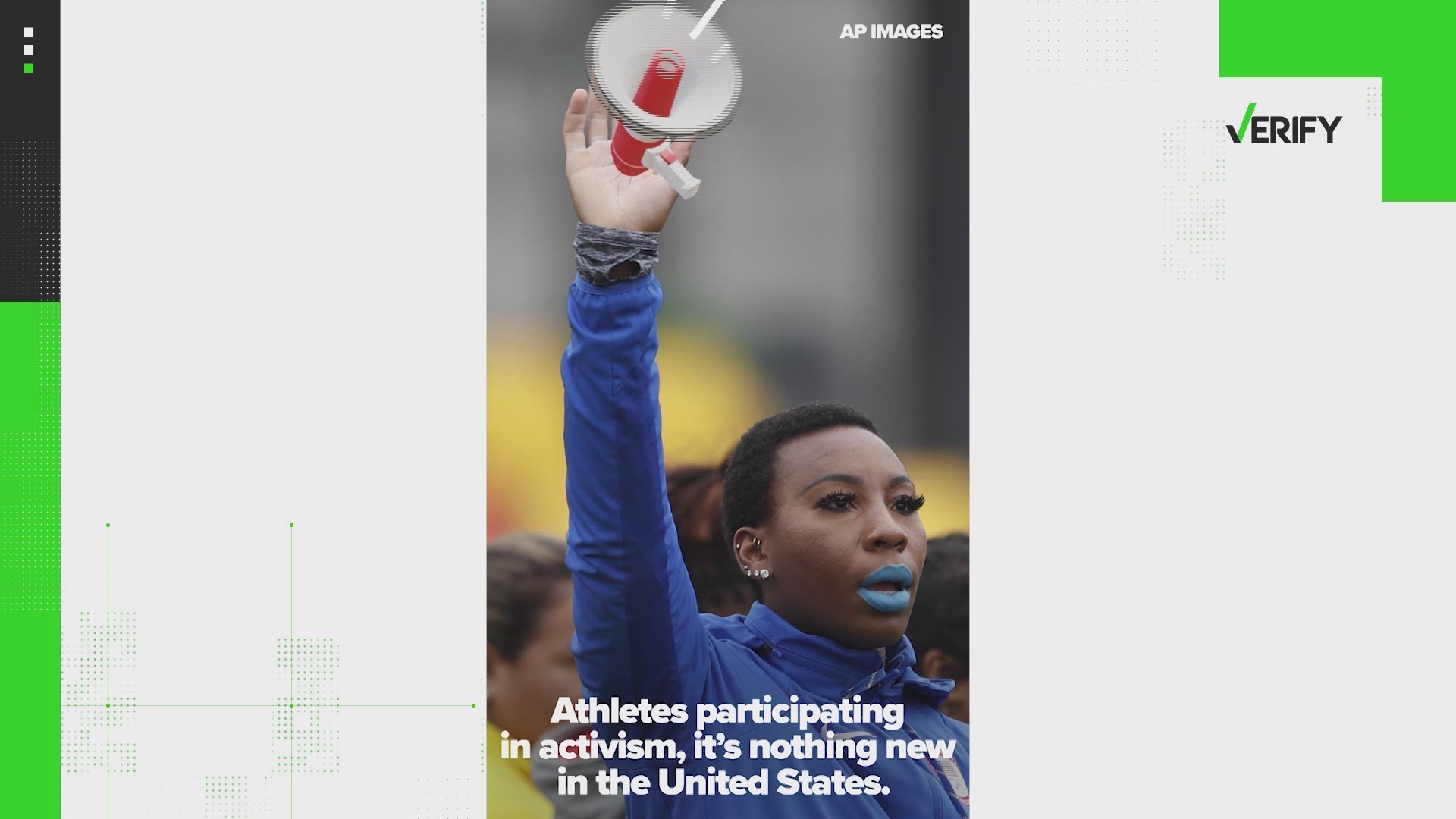 Athletes participating in activism is nothing new in the United States. Over recent years there have been numerous high-profile demonstrations in sports, from Colin Kaepernick kneeling during the national anthem to the NBA printing Black Lives Matter on its basketball courts during the 2020 bubble.

There’s also been a long history of demonstrations on the world’s biggest sports stage: the Olympics. As part of this week’s “VERIFY Weekly” feature, the VERIFY team looked into what is and isn’t allowed when it comes to protesting at the Olympics. You can watch the full video on our YouTube page here.

No, Japan did not ban Black Lives Matter apparel and kneeling during anthems. It’s the International Olympic Committee that sets those rules.

The Olympics, including this summer’s Games in Tokyo, are governed by the Olympic Charter. It’s a set of rules and guidelines that everyone in the Games, from host countries to athletes to fans, agree to follow within the Olympic venue.

Part of the Olympic Charter is Rule 50, which governs neutrality. It says, “No kind of demonstration or political, religious or racial propaganda is permitted in any Olympic sites, venues or other areas.”

The rule not only applies to what athletes say but what they wear as well. It also includes, “Gestures of a political nature, like a hand gesture or kneeling,” according to the IOC.

Team USA tells its athletes that Rule 50 ensures “the Games remain free from demonstrations and political, religious, and racial propaganda.”

On July 2, the IOC revised some of its guidelines related to Rule 50, which gives athletes more opportunities to express themselves, most notably on the field of play prior to the start of the competition, such as when they or their team is being introduced.

The penalties for not following the IOC’s rules vary. The IOC says it will take action on any violations on a case-by-case basis.

Are rules barring protests at the Olympics new?

No, rules barring political demonstrations at the Olympics date back to the 1950s.

Data from Google Trends showed a recent spike in interest in one of the most iconic photos associated with the Olympics: the Black Power salute during the national anthem.

Credit: AP
FILE - In this Oct. 16, 1968 file photo, U.S. athletes Tommie Smith, center, and John Carlos raise their gloved fists after Smith received the gold and Carlos the bronze for the 200 meter run at the Summer Olympic Games in Mexico City. (AP Photo/File)

It happened during the 1968 Olympics in Mexico City. The two men who raised their fists were U.S. track athletes Tommie Smith and John Carlos.

Smith and Carlos symbolically criticized their country’s treatment of Black Americans with their clothes:

Then, during the playing of “The Star-Spangled Banner,” the two men raised their fists in protest.

Their demonstration did not go over well with the IOC, who had already had rules in place restricting political expression for over a decade.

VERIFY researchers found a ban on demonstrations as part of the Olympic Charter dating back to the 1950s. The 1955 Olympic Charter states countries who invite the IOC to host the upcoming Games “must state that no political demonstrations will be held in the stadium or other sport grounds, or in the Olympic Village, during the Games, and that it is not the intention to use the Games for any other purpose than for the advancement of the Olympic Movement.”

Smith and Carlos were suspended and sent home following the demonstration.

Did Gwen Berry break any rules by demonstrating during the national anthem at the U.S. Olympic Trials?

No, hammer thrower Gwen Berry did not violate any rules when she demonstrated during the national anthem at the U.S. Olympic Trials.

A demonstration on June 26 by hammer thrower Gwen Berry caught the attention of the country. Berry was on the podium after qualifying for the Olympics when during the national anthem, she turned away from the American flag and put a shirt over her head that said “Activist Athlete.”

Because Berry was competing in the U.S. Olympic Trials, the rules regarding demonstrations were set by the U.S. Olympic and Paralympic Committee (USOPC), not the IOC. So, the IOC’s Rule 50 was not in effect in this case.

The USOPC previously instituted bans on protests that were similar to Rule 50. In fact, in 2019, Berry was put on probation for 12 months by the USOPC after she raised her fist during the national anthem at the Pan American Games.

But in December 2020, the USOPC changed its rules. Under the new guidelines, athletes would not be sanctioned at the U.S. Olympic and Paralympic Trials for engaging in racial and social justice demonstrations.

So, we can VERIFY Berry did not violate any rules by turning away from the flag during the national anthem at the U.S. Olympic Trials. However, in Tokyo, Rule 50 will be in effect because the IOC is in charge. So, if Berry wins a medal and demonstrates in a similar way during the ceremony, she could be penalized.