After 10 months of chemotherapy and other treatment in 2019, Della Rosa returned to play for the Bucs spring season 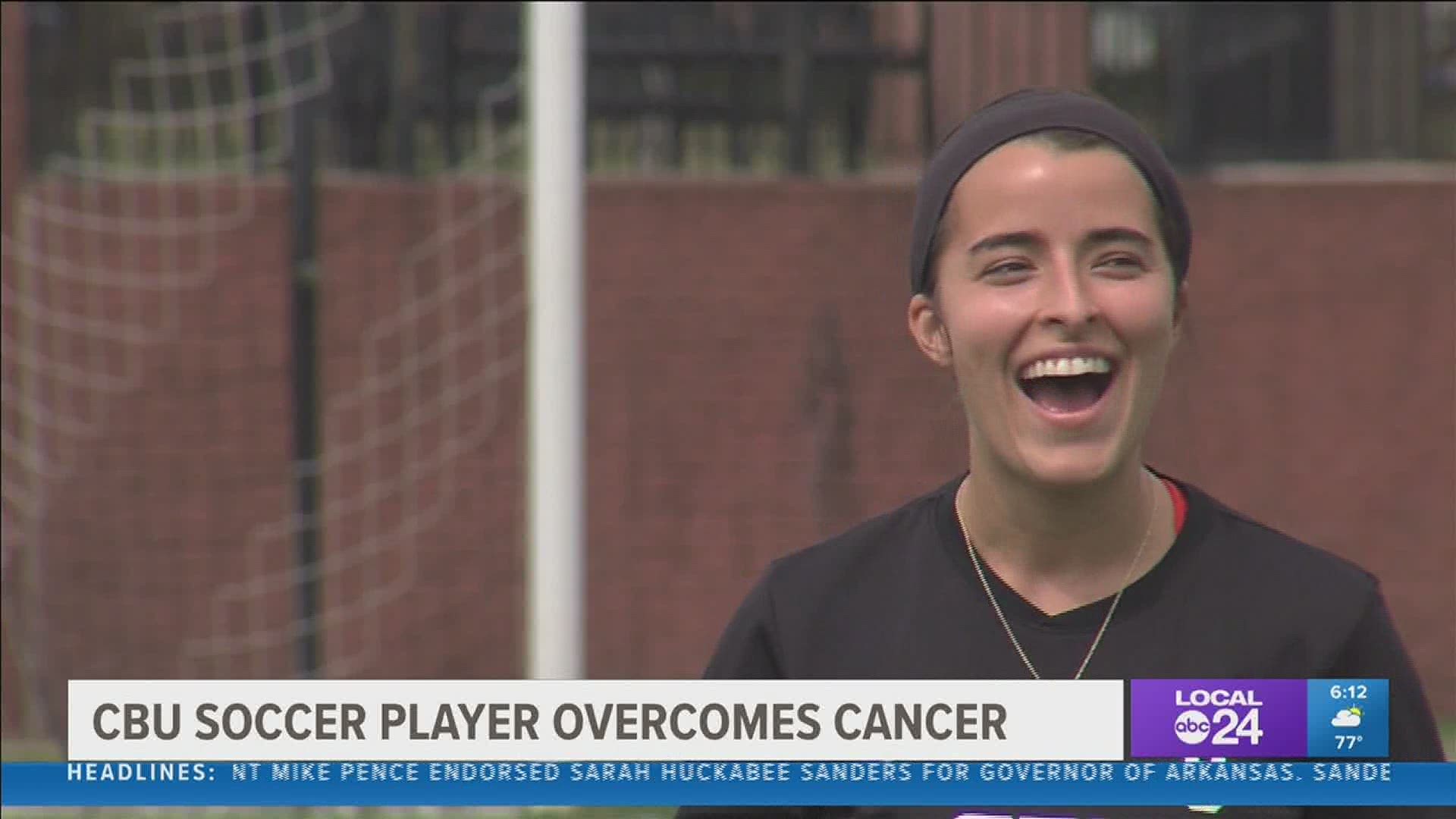 MEMPHIS, Tenn — For 16 seasons, Kieron Heblich has been the head coach of Christian Brothers University women's soccer. And in those 16 seasons, he has never come across someone quite like Anna Della Rosa.

We first met the Houston High School product, as she was beginning treatment for acute myeloid leukemia at St. Jude.

"I was supposed to wait two weeks to get my results," She told Local 24 in 2019. "The leukemia was so widespread throughout my body, that they knew within 24 hours"

Della Rosa was frail. Her hair was gone. And while her spirits were high, doctors told her that she may never play again.

"My oncologists told me, you know we've never seen someone at your age on this harsh of a chemo protocol be able to come back," she told Local 24 last Friday. "People always try to be optimistic with you, but I told them like, you don't know me, because I will be back."

Anna endured 10 months of chemotherapy as well as platelet and blood transfusions. An infection forced doctors to amputate part of her left big toe.

Della Rosa was declared cancer-free in September of 2019. Her focus quickly transitioned from treatment to training.

"I thought I could finish treatment and turn around in a month be ready to play," she said with laugh, recalling, despite much of her chemo treatment being a blur. "I would tell my coach, because he would come to see me, and I would be half in and out, and I would say 'Don't worry, coach, I'll be back by August 12.'"

"I'm like baby steps, we'll take it one step at a time," Heblich said with a smile. "She was like, I'll be back. And like everything else, she proves everybody wrong."

Della Rosa trained twice a day through much of the first half of 2020 to regain the 30 pounds of muscle lost during treatment.

After all that work, the COVID-19 pandemic delayed the Bucs fall season to the spring.

"I cried, I won't lie, I cried," she said through laughter, recalling the tears. "But I knew it understood why it needed to be. I think it's just that I just know I'm in my happiest self when I'm here with the team playing."

Two years since her diagnosis, Anna returned Feb. 24 against Mississippi College. Ten days later, she scored her first goal since 2018.

"I don't think I've ever seen a celebration like it," Heblich said, seemingly unaware of the smile coming to his face as he recollected. "Every single white shirt jumped on her, and that just tells you what she means to her teammates, and what she means to us as a program."

"I was okay until my best friend Mya said 'F' Cancer," Della Rosa said. "And we all just started crying."

I asked Anna what was the more meaningful moment, the first game back, or that first goal? The questions prompted one of the most profound and insightful responses I have received.

"Every game, really," She said with a shrug. "Honestly, my mom texts me saying 'Today is the day.'"

She paused to collect herself.

"I don't want to get emotional, but every day she just tells me to make a difference, so every day is the best day."

Friday was Senior Day, the Bucs lone home match of their shortened season, and Anna's return to Signaigo Field.

Before our interview, which took place prior to the game, Della Rosa told us that the night before that she had a dream that a senior would scored the game-winning goal, with herself getting the assist.

Thank you to @Local24Clayton for taking the time to visit with us yesterday. We can’t wait to see @_apdr_ story. WHAT A NIGHT! https://t.co/T2gO10QNoR

Sure enough, in the final moments of double overtime, off of a corner kick, senior Taylor White scored the game-winning goal for CBU. Anna assisted.

Currently a senior, Anna will use her remaining eligibility to return this fall.

"I'm not done yet," she said without hesitation. "Far from over."