The Memphis Tigers basketball program is in the national spotlight once again, as former star player James Wiseman is selected in the 1st round of the 2020 NBA draft 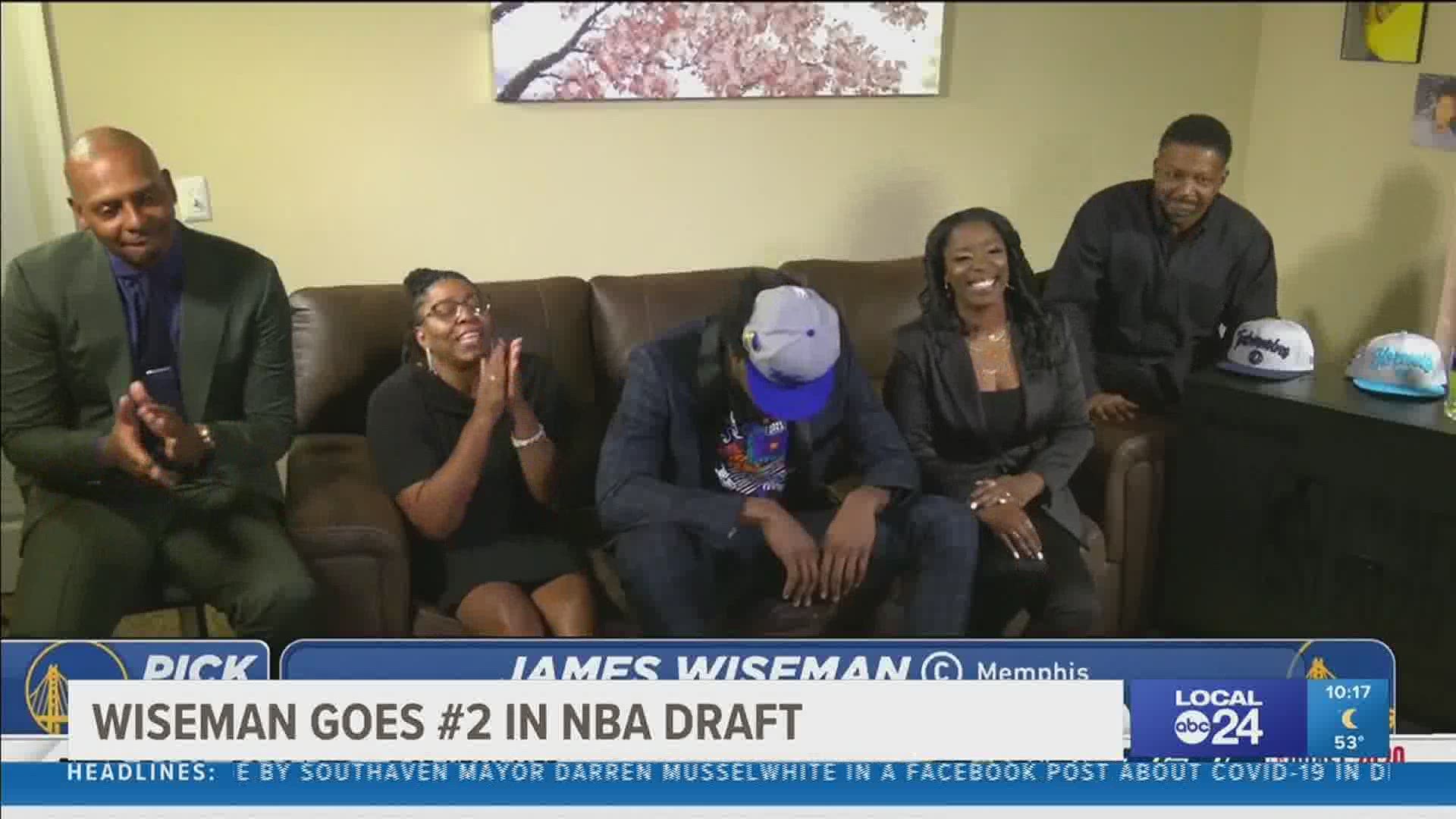 MEMPHIS, Tennessee — His career with the Memphis Tigers men’s basketball team lasted only three games, but now James Wiseman’s career in the NBA is about to start.

Wiseman, a 7’1” athletic center, was selected by the Golden State Warriors as the second overall pick in the National Basketball Association’s 2020 draft Wednesday night. Commissioner Adam Silver announced the picks from ESPN headquarters in Bristol, Connecticut.

Wiseman was considered a possible No. 1 overall draft pick before he ever played in college. Last year's top-ranked college recruit played just three games with the Tigers due to NCAA eligibility issues. He showed glimpses of his potential in scoring, rebounding and protecting the rim.

In the three games he played for the Tigers, Wiseman averaged a double-double of 19.7 points and 10.7 rebounds. He scored a season-high 28 points in the Tigers' opening game, a home victory over South Carolina State.

"I'm truly ready to go to Golden State and learn as much as possible and be the best version of me." @BigTicket_JW is ready for the big moment. #AmericanHoops | @American_MBB pic.twitter.com/BFi0Tk9WAK

Wiseman now will be added to this list of Memphis’ highest NBA draft picks:

History Repeats Itself❗
Head Coach @Iam1Cent & @BigTicket_JW are the only NCAA Head Coach & Player duo that have both been drafted in the Top 3️⃣#TigersInTheNBA | #NBADraft pic.twitter.com/ua2X0fg2QW

With the 2nd pick of the @NBADraft, the @warriors select James Wiseman (@BigTicket_JW)!

NEWS RELEASE FROM THE UNIVERSITY OF MEMPHIS:

MEMPHIS -- Former Memphis Tigers James Wiseman and Precious Achiuwa were selected in the first round of the 2020 NBA Draft on Wednesday night.

Wiseman was taken by the Golden State Warriors with the No. 2 pick while Achiuwa went to the Miami Heat at No. 20, marking the second time in Memphis history two former Tigers have been selected in the first round of the same NBA draft.

“Both of those guys are well deserving of what they’re getting and where they are going in the draft,” Hardaway said. “They are both humble and ready for their opportunity. I’m very excited as someone who coached both of those kids. To see how hard they’ve worked and for that to be able to pay off is a great feeling.”

Wiseman averaged 19.7 points and 10.7 rebounds in three games for the Tigers last season. The 7-foot-1 center came to Memphis as a consensus five-star recruit and the No. 1 recruit in the 2019 class, according to ESPN and Rivals. He had 28 points, 11 rebounds and three blocks in 22 minutes in his Memphis debut last November against South Carolina State.

Wiseman is the first Memphis player ever selected No. 2 overall. According to the NBA.com draft database, the Tigers have joined North Carolina and Kentucky as the only schools to have players selected Nos. 1-7 in NBA draft history.

His selection at No. 2 also makes Hardaway the only NCAA head coach to have been picked in the top three of the NBA draft and have been the college head coach of a player taken in the top three. Hardaway, who played three seasons at Memphis, was selected third overall in 1993 by the Golden State Warriors and traded to the Orlando Magic.

“(Coach Hardaway) taught me how to approach the game, how to study film every day,” Wiseman said on ESPN’s draft broadcast. “You have a coach that already played in the NBA. Him knowing how the NBA plays helped out my game a lot and impacted my game in a positive way.”

Achiuwa, a 6-foot-9 forward, started all 31 games for the Tigers in 2019-20 and led the team with 15.8 points and 10.8 rebounds per game. He was named American Athletic Conference Player and Freshman of the Year, becoming the first player in AAC history to earn both honors. He was one of only 16 players in the nation to average a double-double last season and the only freshman among the top 10 conferences in college basketball to do so.

With the Heat, Achiuwa will join a team that advanced to the NBA Finals last season.

The Start of Something Special.

Been excited all day! Once I know where I’m going, @Verizon will help me connect with the people who got me here! If y’all were me, who would you call first? #draftday #ad pic.twitter.com/XF1ArwcZX9

The Associated Press contributed to this story.