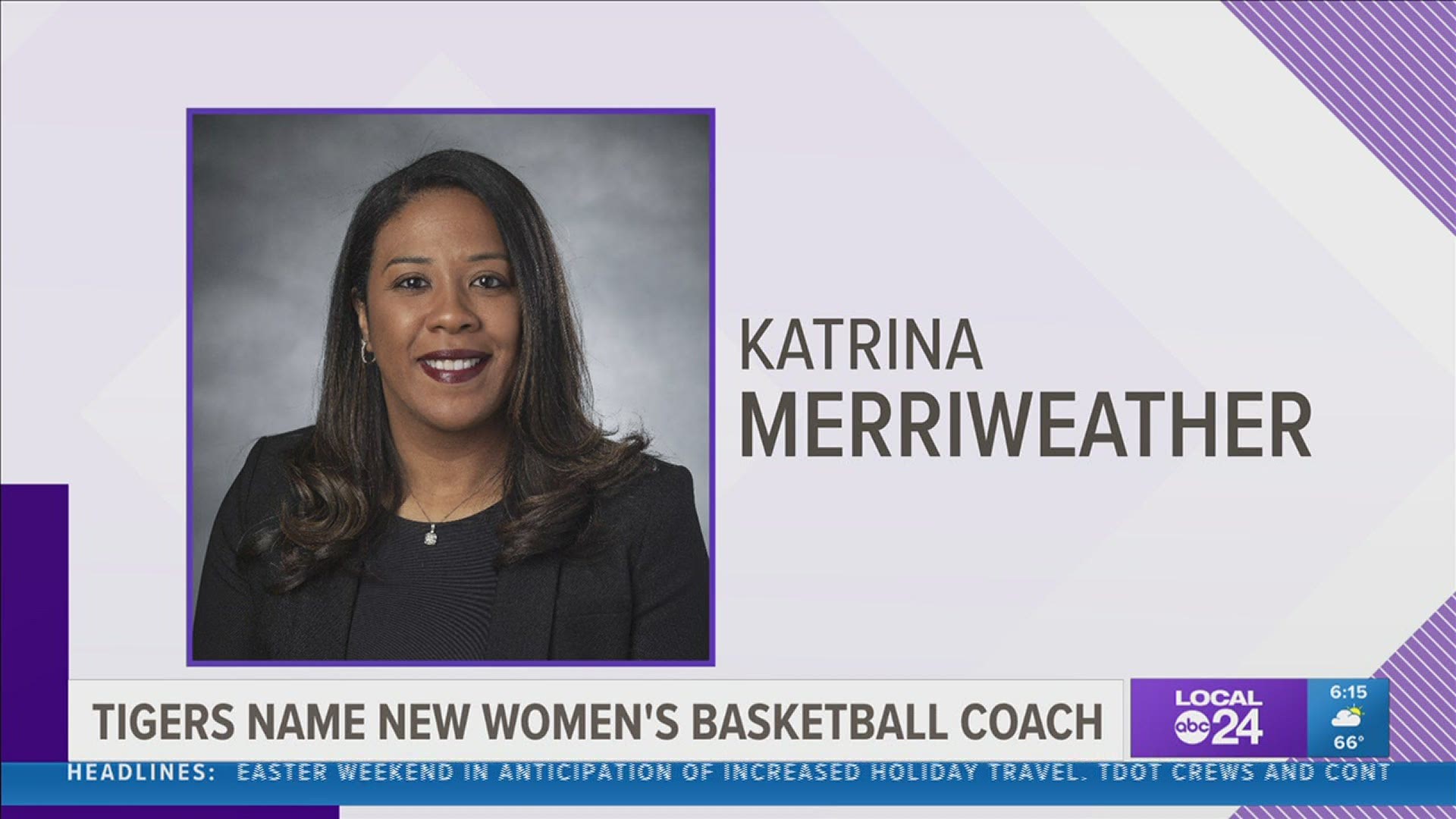 MEMPHIS, Tennessee — There’s a new lioness for the Tiger’s Den.

Monday the University of Memphis announced that former Wright State coach Katrina Merriweather is the new head coach of the women’s basketball team.

From University of Memphis:

MEMPHIS, Tenn. – Katrina Merriweather, who led Wright State to the program's first NCAA Tournament win this season and the only three Horizon League Championships in school history, has been named Memphis' 12th women's basketball head coach, director of athletics Laird Veatch announced Monday. She also led the Raiders to the school's only back-to-back NCAA Tournament appearances in 2019 and 2021.

Merriweather was named Horizon League Coach of the Year in 2021 for the third time in her five seasons at Wright State while being a part of all three of the Raiders' NCAA Tournament appearances and Horizon League Tournament titles in school history, twice as head coach in 2019 and 2021 and one as an assistant in 2014. She had a 113-47 (.706) record in five seasons at Wright State.

Wright State fell to No. 5 seed Missouri State in the NCAA Tournament Second Round on Wednesday.

In 2020-21, Merriweather led the Raiders to a Horizon League co-regular-season title with a 19-8 record overall and a 15-5 league mark. The Raiders breezed through the Horizon League Tournament with three-straight double-digit wins by an average of 13.7 points over Northern Kentucky (74-56), Cleveland State (73-62) and IUPUI (53-41).

"Coach Merriweather is a proven winner and led Wright State to its first NCAA Tournament win in history this year," said Veatch. "She won two Horizon League titles, led the Raiders to three NCAA Tournaments and was named Horizon League Coach of the Year three times. She is an outstanding coach, is a great recruiter and runs a first-class overall program. We are so excited to welcome Katrina to the Memphis Family."

Wright State reached the postseason in four of Merriweather's five seasons, missing out only in 2020 when postseason tournaments were canceled due to the COVID-19 pandemic. Wright State was one of only six programs in the 2021 NCAA Tournament with an all-female coaching staff along with Stanford, UCF, Georgia Tech, High Point and Central Michigan.

"I am thrilled for the opportunity to lead the women's basketball program at the University of Memphis," said Merriweather. "It is clear that Laird's vision for the athletic department is fueled by passion for the University and the City of Memphis. This program has experienced high levels of success in the classroom and on the court, and the young women have become incredible members of society. I am looking forward to building on the tradition of excellence."

In her first season at Wright State in 2016-17, Merriweather won Horizon League Coach of the Year honors in leading the Raiders to a then-school-record 25 wins en route to being Horizon League regular-season co-champions for the first time in school history.

In 2017-18, Wright State went 23-11 overall and 12-6 in the Horizon League while making a second consecutive WNIT appearance.

Shamarre Hale was named 2019-20 Horizon League Freshman of the Year while Baker was a Horizon League first-team selection and Michal Miller was a second-team pick. Jada Roberson joined Hale on the All-Freshman Team and Frierson was selected to the All-Defensive Team.

"We are thrilled to welcome Katrina into the Tiger Family," said UofM President M. David Rudd. "She has proven her ability to build a successful program with the energy and passion that make her a perfect fit for our University and the City of Memphis. With Katrina leading the way, the future is very bright for our women's basketball program."

Prior to being named head coach in 2016-17, Merriweather was an assistant under then-head coach Mike Bradbury for six seasons at Wright State from 2010-16 as the duo turned around a moribund Raider program that had non-winning seasons in 21 of the previous 22 seasons.

The Raiders played in their first Div. I postseason tournament with two games in the WNIT in 2010-11 and notched the program's first 20-win season in Div. I play.

Merriweather was the recruiting coordinator her last four years as a Raiders assistant from 2012-16, coached the wing players and was the liaison with compliance.

"We are extremely excited to welcome Coach Merriweather to the Tigers Family," said Lauren Ashman, executive associate athletics director/senior woman administrator. "She is an exceptional leader and coach as evidenced by her sustained success at Wright State University. Katrina thrives as a role model for her student-athletes and places high value on their academic, athletic and personal growth. She will be a great representative for the University of Memphis and will certainly make our City proud."

Her three recruiting classes at Purdue ranked in the top 10, including a No. 3 ranking by Blue Star Basketball. In 2005-06, Purdue finished 26-7, was the Big Ten runner-up and advanced to the NCAA Tournament Sweet 16 before losing to No. 1 North Carolina.

Merriweather began her coaching career at her alma mater, Cincinnati, as a graduate assistant in 2001-02 as the Bearcats went 26-5 and advanced to the NCAA Tournament Second Round.

As a player, she became the first Bearcat to advance to postseason play all four years, competing in the NCAA Tournament in 1999 and the WNIT in 1998, 2000 and 2001. She led the Bearcats to an 83-41 record in her four-year playing career.

From Indianapolis, Merriweather graduated from the University of Cincinnati in 2001 with a degree in English literature and earned a second degree in secondary education in 2002. A 1997 graduate from Cathedral High School in Indianapolis, she was on the 1997 Indiana All-Star Team. Earning 11 varsity letters, she was named Marion County Athlete of the Year and was the winner of the prestigious John Wooden Citizenship Award.

Katrina Merriweather was named as the seventh head coach in Wright State women's basketball coach on April 19, 2016 and she hasn't stopped running.

The 2016-17 was historic for the WSU women's basketball program as she led the Raiders to 25 wins and finished as Regular Season Co-Champions for the first time in program history. The successful season earned the squad a berth in the WNIT, hosting the first-round game against Central Michigan before taking Michigan to the brink in the round two.  Another first came as the Raiders received votes in the national Top 25 for the first-time ever.  Named the Horizon League Coach of the Year, Merriweather set the bar higher than ever, and expects to achieve new heights.

Her second season at the helm was much of the same success as the team advanced to the WNIT again.  The Raiders finished the season at 23-11, 12-6 as Chelsea Welch was named the Player of the Year and to the league's first team.  Emily Vogelpohl also was honored as she was placed on the All-Defensive Team.  Welch later signed a professional contract to play in Portugal.

The 2018-19 season saw Merriweather take the program to new heights with a record of 27-7, 16-2 and the school's first-ever outright regular-season title.  WSU cruised through the Horizon League Tournament and advanced to just its second NCAA Tournament, playing at Texas A&M.  Four Wright State women's basketball players and head coach Katrina Merriweather were honored by the Horizon League.  Merriweather was named the Coach of the Year as Mackenzie Taylor was selected to the first team, Symone Simmons to the second team, Angel Baker to the Freshman Team and Emily Vogelpohl to the All-Defensive Team. Senior Michal Miller joined Kim Demmings as only the second player is program history to earn the Conference Tournament MVP.

Despite all the challenges the 2020-21 season saw, Merriweather tallied her third Horizon League Coach of the Year honor.

Despite the graduation of three 1,000 scorers, the young squad managed to finish league play tied for 2nd. Led by Michal Miller and Angel Baker, the squad saw many areas of growth but couldn’t overcome in order to defend their title. Still, Merriweather makes no excuses.

“There were unfortunate circumstances that led us to not meet our potential this season. Some obstacles were preventable, others weren’t. Those things along with the sudden ending of our season leave us with a lot to prove next season. Every team deals with adversity and we have to continue to learn how to fight through tough times as a unit.”

A former assistant at Purdue, UIC and Cincinnati, Merriweather joined the Wright State women's basketball coaching staff as an assistant in September, 2010.

Teaming with then-head coach Mike Bradbury, the Raiders reached new heights in 2010-11 as WSU played in its first Division I post-season tournament with two games in the Women's Basketball Invitational and secured the program's first 20-win in Division I. Merriweather served as the recruiting coordinator from 2012-2016 and was responsible for coaching and mentoring the wing players. She served as the Compliance liaison.

An assistant with the Boilermakers from 2003-06, Merriweather served as the program's recruiting coordinator and assisted with scouting along with coaching the guards.

In 2003-04, her first year at Purdue, Merriweather assisted the Boilermakers in a 29-4 campaign, a season that saw Purdue win the Big Ten Tournament and advanced to the NCAA Sweet 16. She also played a major role in recruiting a five-player class rated in many scouting services' top 10.

Merriweather's recruiting success carried over the following year, as she helped sign a class rated in the top 10 by Blue Star Basketball. While she was scouring gyms nationwide, Merriweather also filled her role in Mackey Arena, helping guide one of the youngest teams in Purdue history to a 17-win season and an NCAA Tournament berth.

During the 2005-06 season, Purdue finished 26-7 and again advanced to the NCAA Sweet 16 before falling to top-ranked North Carolina. The Boilermakers were second in the Big Ten standings and were runner-up in the conference tournament. The recruiting class was ranked third nationally by Blue Star Basketball.

Before coming to Purdue, Merriweather served as an assistant coach for a year at UIC. Charged with performing duties such as travel, film exchange, scouting and recruiting correspondence, Merriweather was part of head coach Lisa Ryckbosch's staff that guided the Flames to a 17-11 record in 2002-03.

Merriweather began her collegiate coaching career at Cincinnati, her alma mater. As a graduate assistant during the 2001-02 season, Merriweather handled scouting and film duties. The Bearcats posted a 26-5 record that year and advanced to the second round of the NCAA Tournament.

A native of Indianapolis, Merriweather graduated from Cincinnati in 2001 with a degree in English literature and earned a second degree in secondary education in 2002. Under head coach Laurie Pirtle, Merriweather is the first Bearcat to advance to postseason play all four years, competing in the NCAA Tournament in 1999 and the WNIT in 1998, 2000 and 2001. During her career, Cincinnati posted an 83-41 record. She also became a member of Alpha Kappa Alpha Sorority, Inc.

Along with her college coaching career, Merriweather has also coached AAU basketball for The Family, Inc., based in Indianapolis, and has served as a summer camp coach at several universities. The Family has allowed her to coach high school All-Americans and current WNBA players.

A 1997 graduate from Cathedral High School in Indianapolis, Merriweather was a member of the 1997 Indiana All-Star Team. Her 11 varsity letters earned her Marion County Athlete of the Year. She was also the winner of the prestigious John Wooden Citizenship Award.

Merriweather is currently enrolled in the Student Affairs in Higher Education Master’s program.