Boats & barges are once again rolling on the river

More than 1000 barges and 66 tugs were backed up along the river waiting for it to open after a crack was found in the I-40 Hernando de Soto bridge in Memphis.

MEMPHIS, Tenn. — Traffic is once again moving on the Mississippi River at Memphis.

Friday morning, restrictions were lifted, allowing boats move underneath the I-40 Hernando de Soto bridge. River traffic had been at a standstill since inspectors shut down the bridge earlier this week after discovering a crack in the bridge.

Vessels moving was a welcome site for many in the transportation industry. Boats sitting idle can cost companies time and money.

The Economy Boat Shop operates on the river restocking commercial vessels with supplies. Workers said rarely do you have as many tugs as barges sitting idle as we have this week.

"It doesn’t happen very often. Every once in a while, in low water when the Core of Engineers is dredging, you’ll find some river closures," said Brian Leatherman, manager.

Opening the Mississippi River at Memphis means the 62 vessels and more 1,000 barges that were stuck along the river can keep moving.

You may not realize it, but a lot of product moves up and down this river and experts say it’s vital to our supply chain. 50% of all soybeans and 60% of corn in the U.S. are sent down the river to New Orleans - and that’s not all.

The 1st barge heading under the I-40 Hernando DeSoto bridge! @USCGHeartland what a pretty site. pic.twitter.com/EBFMO1Ikyu

"There is grain moving down the river as we speak - in volume. This time of year cotton is moving as we speak. Lumber is moving for export as we speak , “ said Bill Dunavant, Dunavant Enterprises CEO.

RELATED: Mid-South leaders react to the I-40 Hernando de Soto bridge closure due to "crack"

Dunavant said getting the river back moving is important, but also without the Hernando de Soto bridge open for vehicles, the supply chain is slowing down.

With only one bridge open, the traffic backups are causing big problems.

"Right now it’s costly. It’s delaying things and we’ve got to plan for that, and unfortunately it adds cost to the system," said Dunavant.

Dunavant said making matters worse, right now demand for products is at an all time high because of surge in e-commerce and the pandemic.

"The driver world, the supply chain world, it wasn’t ready for that and everyone is struggling for that," said Dunavant. 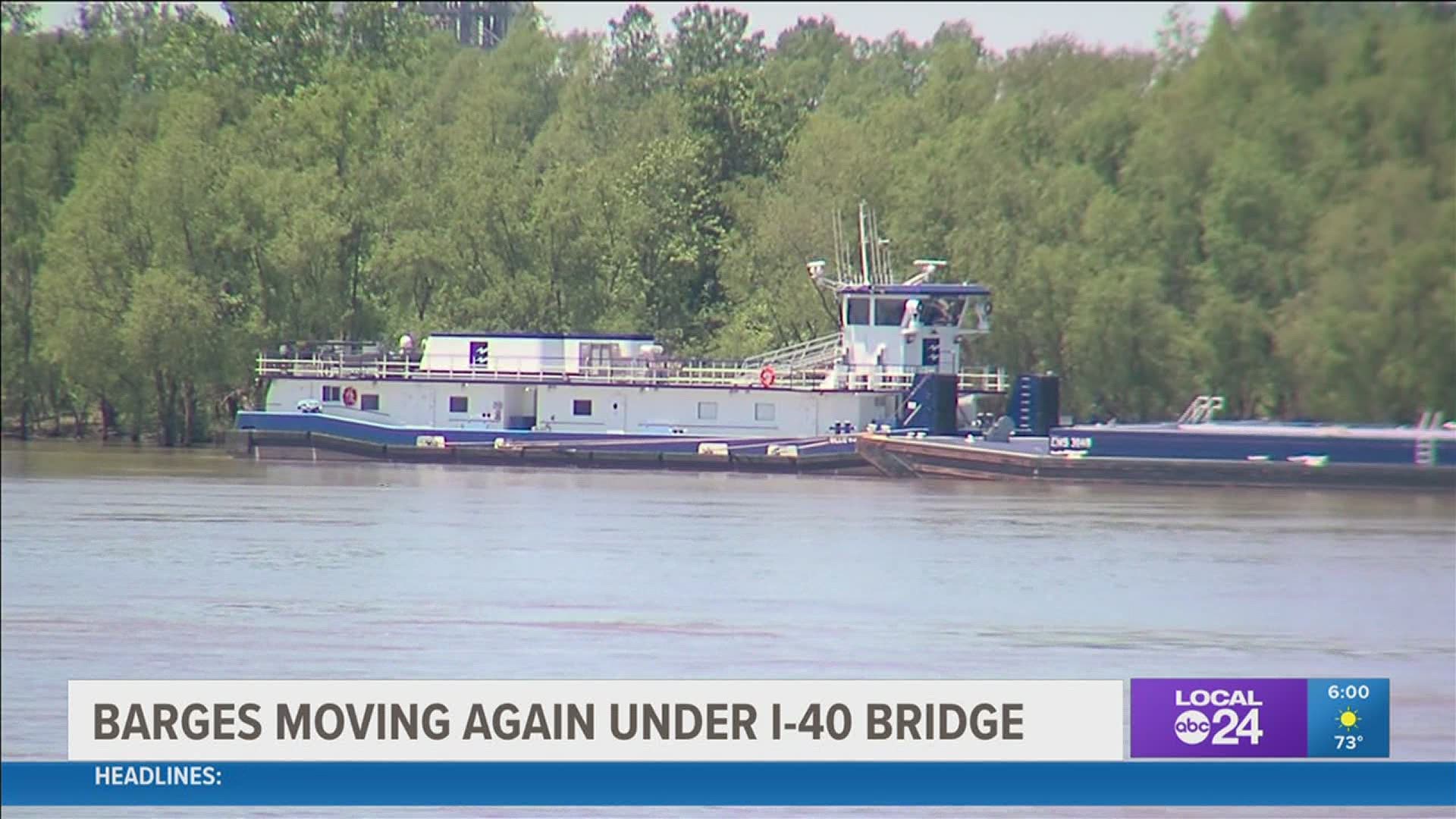 Back on the river, crews at the boat store are helping resupply tug boats waiting to move. Leatherwood said with so many boats jammed up on the river, it could be a couple days before they are cleared.

"You're not going to see boats going northbound and southbound at the same time. They let the southbound tugs clear and then the northbounds go," said Leatherwood.

Crews on many of stuck tug boats were brought Memphis BBQ delivered by workers of the boat shop. The hope was to send them off with a little taste of Memphis.