The Memphis bridge remains closed to vehicle traffic after a fracture was found in a steel beam in May. 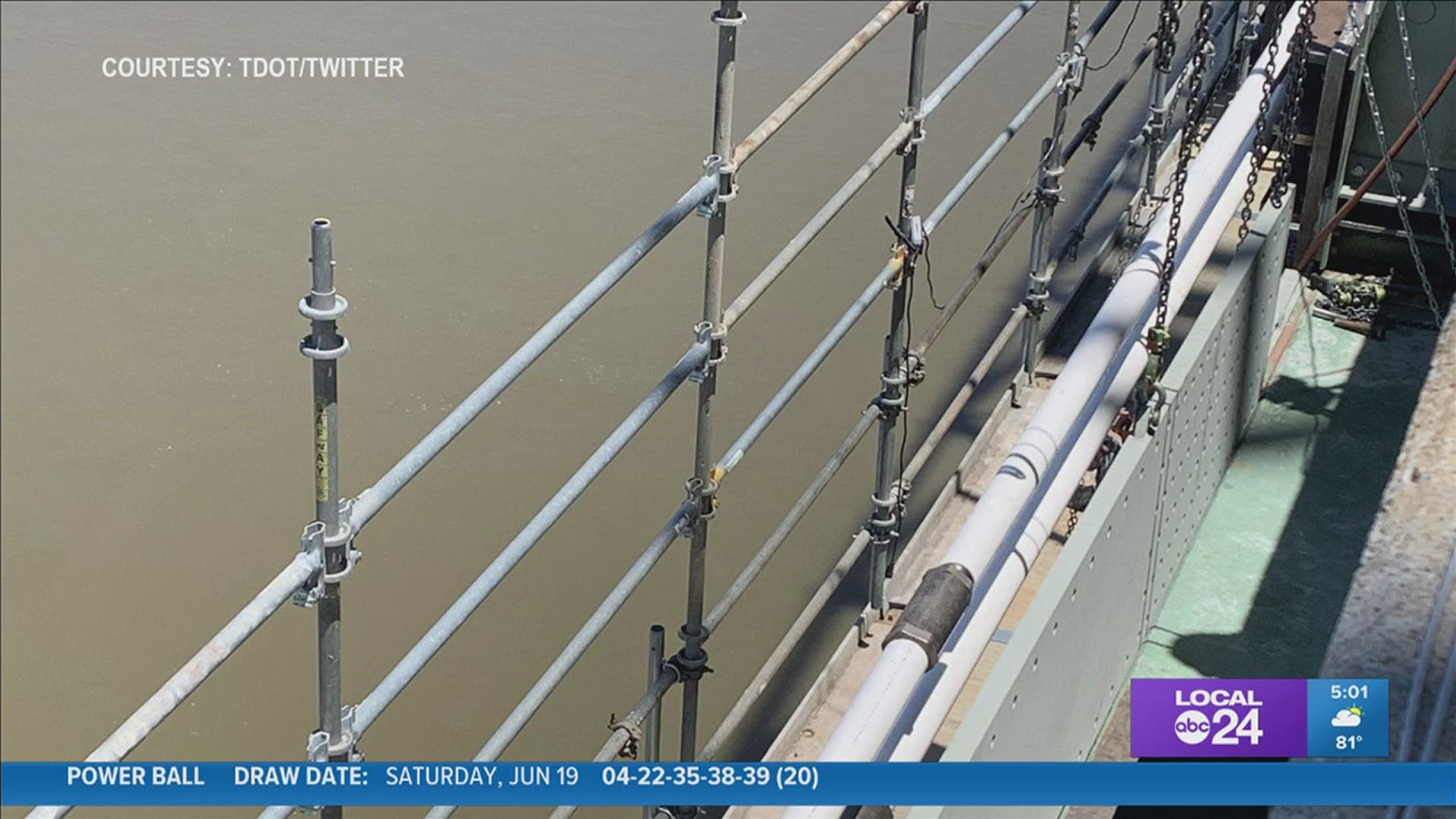 MEMPHIS, Tenn. — UPDATE 6/22/2021 - The Tennessee Department of Transportation said Tuesday that the first plate has been installed as part of the repairs to the I-40 Hernando de Soto bridge.

TDOT said 1.2 million pounds of pressure are applied to the post tension rods to install the new plates.

This process is expected to take up to two weeks.

🚧1st plate installed🚧
1.2 MILLION pounds of pressure applied to the post tension rods to be able to install the new plates. This process is estimated to take 10-15 days. #Progress #i40msriverbridge #memphis #tuesdayvibe pic.twitter.com/bHJKM54FQa

6/21/2021 - The Tennessee Department of Transportation said Monday design plans for the repairs to the I-40 Hernando de Soto bridge were released to the contractor this weekend.

Currently, the bridge remains closed to vehicle traffic after a fracture was found in a steel beam in May. Traffic over the Mississippi River remains diverted to the I-55 bridge.

Read the full update from TDOT below:

This week, several teams are on-site inspecting, weld testing, and performing routine maintenance such as cleaning out drains while the bridge remains closed to traffic. Design plans were released to the contractor on Saturday night. These plans will be used to procure the needed plates, bolts, and other materials, in addition to developing the shop drawings for phase two repairs. Further information related to the schedule will be released later this week once we know how long it will take to procure the needed materials.

All interstate traffic in the Memphis area is still being diverted to I-55. We have installed an additional camera dedicated to monitoring the Crump interchange, and additional message boards are set up to assist northbound traffic. We continue to study ways to alleviate congestion and help traffic flow. We are averaging around 67,000 vehicles per day on the I-55 bridge. This volume is generated from a radar station located just off the east side of the bridge.

TDOT HELP trucks are stationed on both sides of the I-55 bridge to respond quickly to any incidents and keep lanes open. Below are direct links to the TDOT SmartWay cameras posted at the east and west approaches of I-55 for live traffic information.

Inspectors are still reviewing hours of drone video and numerous pictures of the I-55 bridge. There continues to be no concern from the inspectors. We will release the final report when available.

We continue to hold daily meetings with ARDOT, our consultants, Tennessee Highway Patrol, Memphis Police Department, and FHWA to develop and expedite the repair project while managing traffic along the alternate routes.

We have created a photo album on Facebook called I-40 Hernando DeSoto Bridge – Memphis, Tennessee. Everyone has permission to use the pictures. We also have a webpage dedicated to the bridge repair. For the daily updates and press releases, click on Library from your menu options: https://www.tn.gov/tdot/projects/region-4/i-40-hernando-desoto-bridge.html. Please follow @myTDOT on Facebook, Twitter, and Instagram.