It's so Florida, with the chance of showers and thunderstorms in the afternoon. 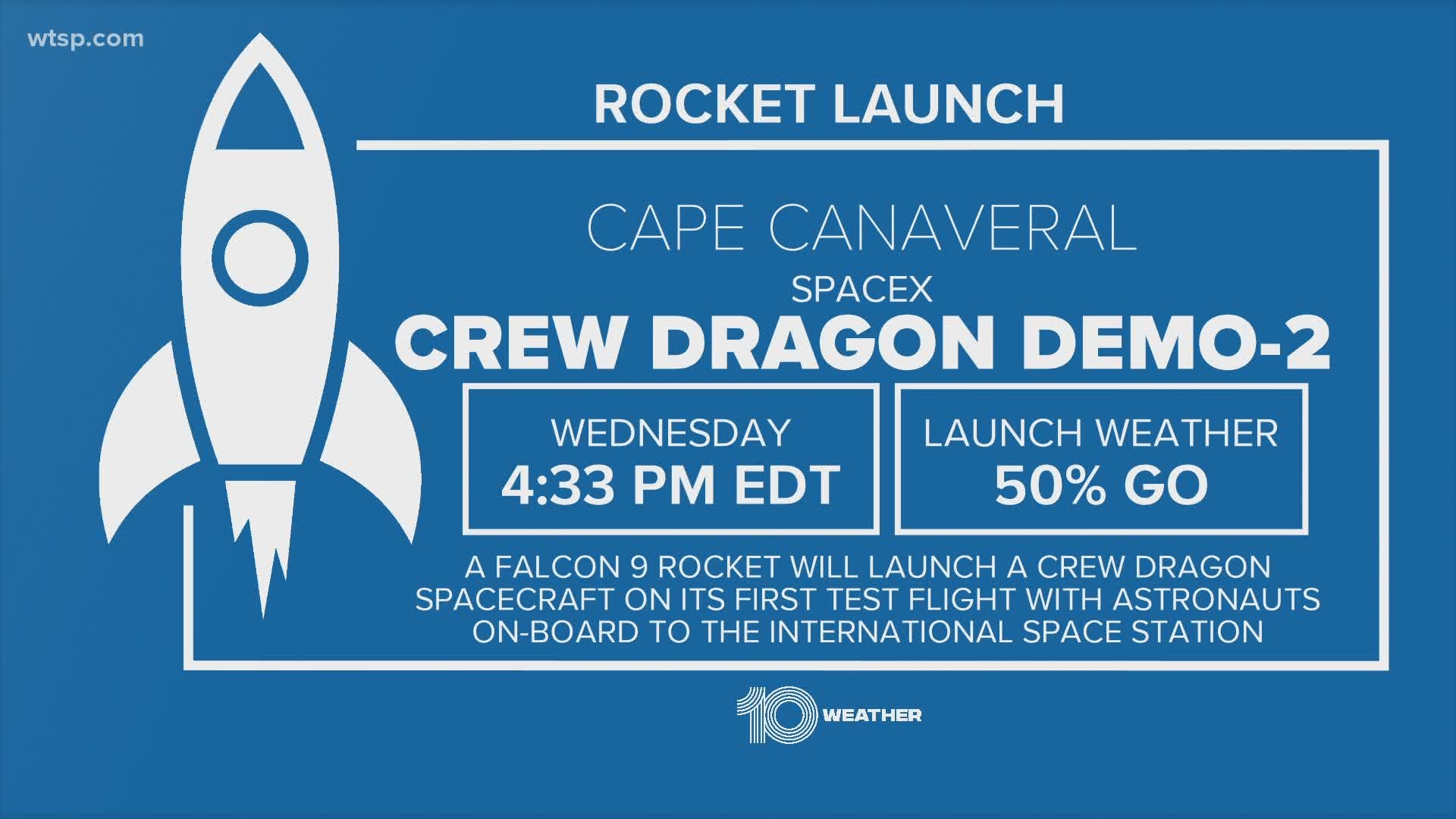 CAPE CANAVERAL, Fla. — America will be holding its breath for this week's historic launch of astronauts from U.S. soil -- and for the weather forecast.

As of Wednesday afternoon, the 45th Weather Squadron now gives a 50-percent "go" conditions for the 4:33 p.m. Wednesday liftoff from Kennedy Space Center's Launch Complex 39A as Florida's summer-like showers and storms could put a damper on the day.

Weather conditions are still of concern this afternoon, especially downrange with the formation of Tropical Storm Bertha. This storm is rather close to what will be the rocket's ground track as the plan is for the Falcon 9 rocket to fly northeast from the Kennedy Space Center. This would allow for alignment with the orbit of the International Space Station.

Also of concern, weather conditions in the event the Crew Dragon spacecraft has to perform a launch abort maneuver, zones that became areas of concern after Bertha developed.

Earlier this week, there were 40-percent "go" conditions, and on Monday, that percentage increased to 60-percent.

"On launch day, residual moisture will still be present and mid-level steering flow will be westerly, meaning afternoon convection will travel eastward towards the Space Coast," according to the 45th Weather Squadron. "The primary concerns are flight through precipitation, as well as the anvil and cumulus cloud rules associated with the afternoon convection."

This essentially means NASA astronauts Robert Behnken and Douglas Hurley won't be riding onboard a Falcon 9 rocket into any sort of rainfall or thick cloud cover.

RELATED: SpaceX's first crewed launch: What you need to know

Consider the afternoon liftoff time just that: a snapshot in time. SpaceX's mission, formally called Crew Dragon Demo-2, has an "instantaneous" launch window. The crew must take off at that time to properly rendezvous with the International Space Station. If they don't, unlike other missions where the launch window might be for a couple of hours, that's it for the day.

The weather conditions on the launchpad aren't the only concerns for the whole operation. Mission control must also consider what the weather might be like downrange of Cape Canaveral and across the Atlantic Ocean, such as unfavorable weather and high waves, should a launch abort be triggered.

It's just one among 14 weather-related criteria NASA published that cannot be broken.

"Do not launch if downrange weather shows high probability of violating limits at splashdown in case of Dragon launch escape," NASA said. "Downrange weather is monitored at more than 50 locations [from Florida to Ireland] along the ascent track along the North American eastern seaboard and across the North Atlantic.

"Probability of violation is calculated for each location including limit conditions for wind, waves, lightning, and precipitation."

NASA has relied on Russia to get its astronauts to the International Space Station since the shuttle retired.