Several voter registration organizations are asking a judge to stop Tennessee’s new restrictions for signing up voters from taking effect in October, say... 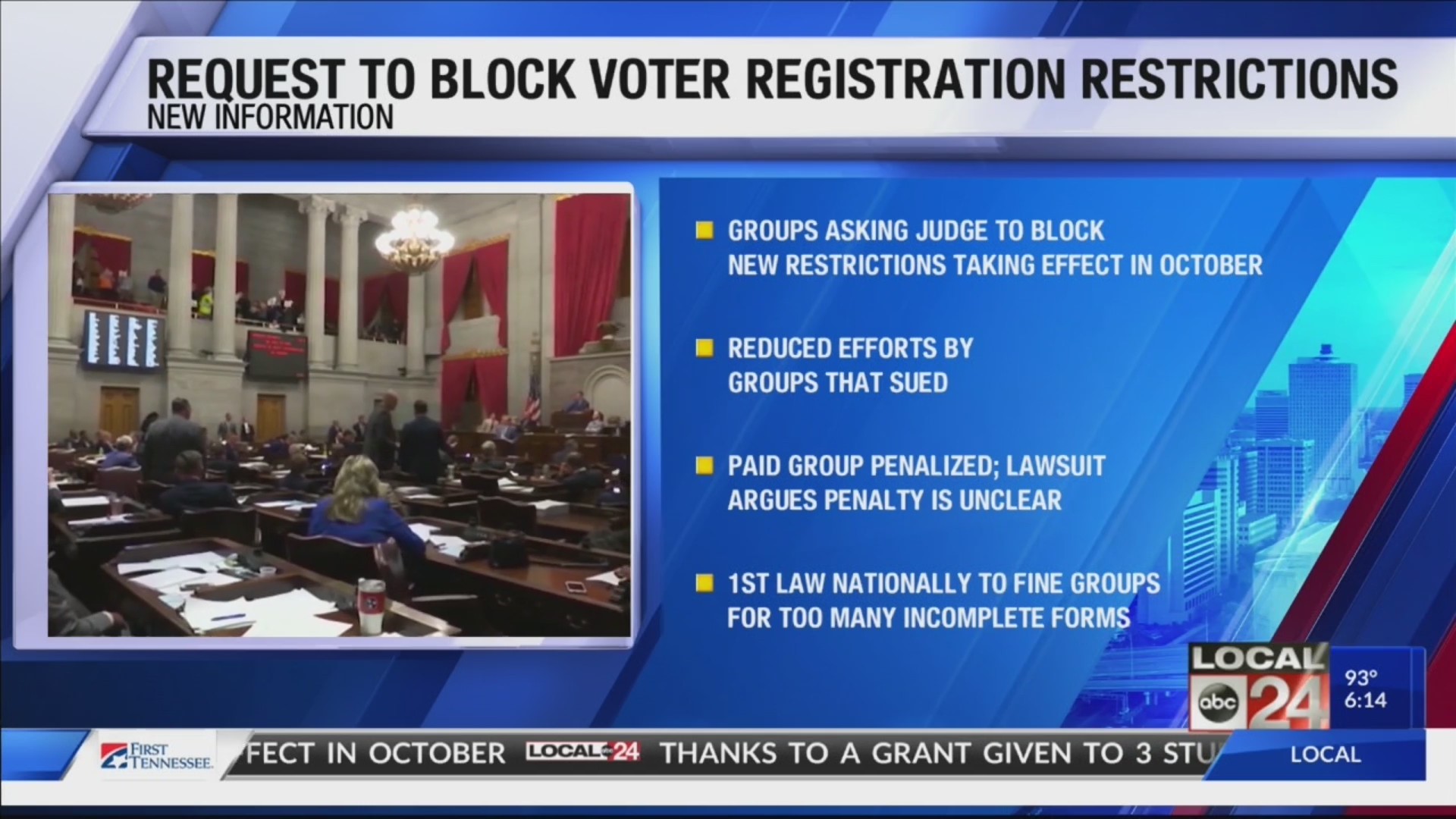 In a Nashville federal court filing Friday, the Lawyers’ Committeefor Civil Rights Under Law wrote that Tennessee’s new law has left the groupsthat filed the lawsuit with the choice of either halting or significantlyscaling back voter registration efforts ahead of the 2020 elections because ofthe financial risks and exposure to possible criminal prosecution.

The law is likely the first nationally to fine groups for too manyincomplete registration forms. It also includes misdemeanor charges for otherintentional infractions of new rules. Only paid groups could be penalized underthe law, though the legal filing contends the distinction is unclear due to thegroups’ use of grant money and stipends for workers in certain cases.

The lawsuit was filed in May on behalf of the NAACP stateconference, The Equity Alliance, The Andrew Goodman Foundation and Democracy Nashville-DemocraticCommunities, which in particular are dedicated to expanding voting rights forAfrican-Americans, other minorities and students. It alleges infringement onFirst and Fourteenth Amendment rights.

Another federal challenge of the law by the American CivilLiberties Union and other groups is also pending.

“Not only does this law create hurdles that prevent us fromhelping our community register to vote, it intimidates our members so that theydo not want to become officers of the TN NAACP or the local units because theyfear criminal penalties and civil fines if they are required to carry out acivic engagement plan that includes voter registration, which they alldo,” wrote Gloria Jean Sweet-Love, Tennessee State Conference of the NAACPpresident, in an accompanying filing.

In pushing for the bill, Hargett’s office had noted that many ofthe 10,000 registrations submitted in and around Memphis last year by theTennessee Black Voter Project on the last day for registering were filled outincorrectly.

The misdemeanor penalties could kick in if groups intentionallyturn in forms after new deadlines, pay people based on quotas, fail to fill outstate registration, don’t undergo training, and more.

A class A misdemeanor is punishable by up to almost a year in jailand up to $2,500 in fines.

Some of the groups that sued wrote that they could need acompliance officer to help them navigate the law, but don’t have the money topay for it.

Additionally, some worried that their funding could be injeopardy. Democracy Nashville-Democratic Communities may not pursue any fundingthat requires registering voters due to the law, according to a court filing.And The Equity Alliance worries grants might become harder to get, despiteTennessee’s dismal rankings in voter participation metrics.

“Another major concern is that, in light of the new law,national organizations that have been the source of much of our funding may behesitant to fund Tennessee voter registration efforts,” Charlane Oliver,co-founder and board president of The Equity Alliance, wrote in an accompanyingfiling. “In light of the risk of criminal and civil penalties, they maythink it will be less risky to dedicate funding elsewhere.”