The civil trial in the Troy Goode case is set for this July. 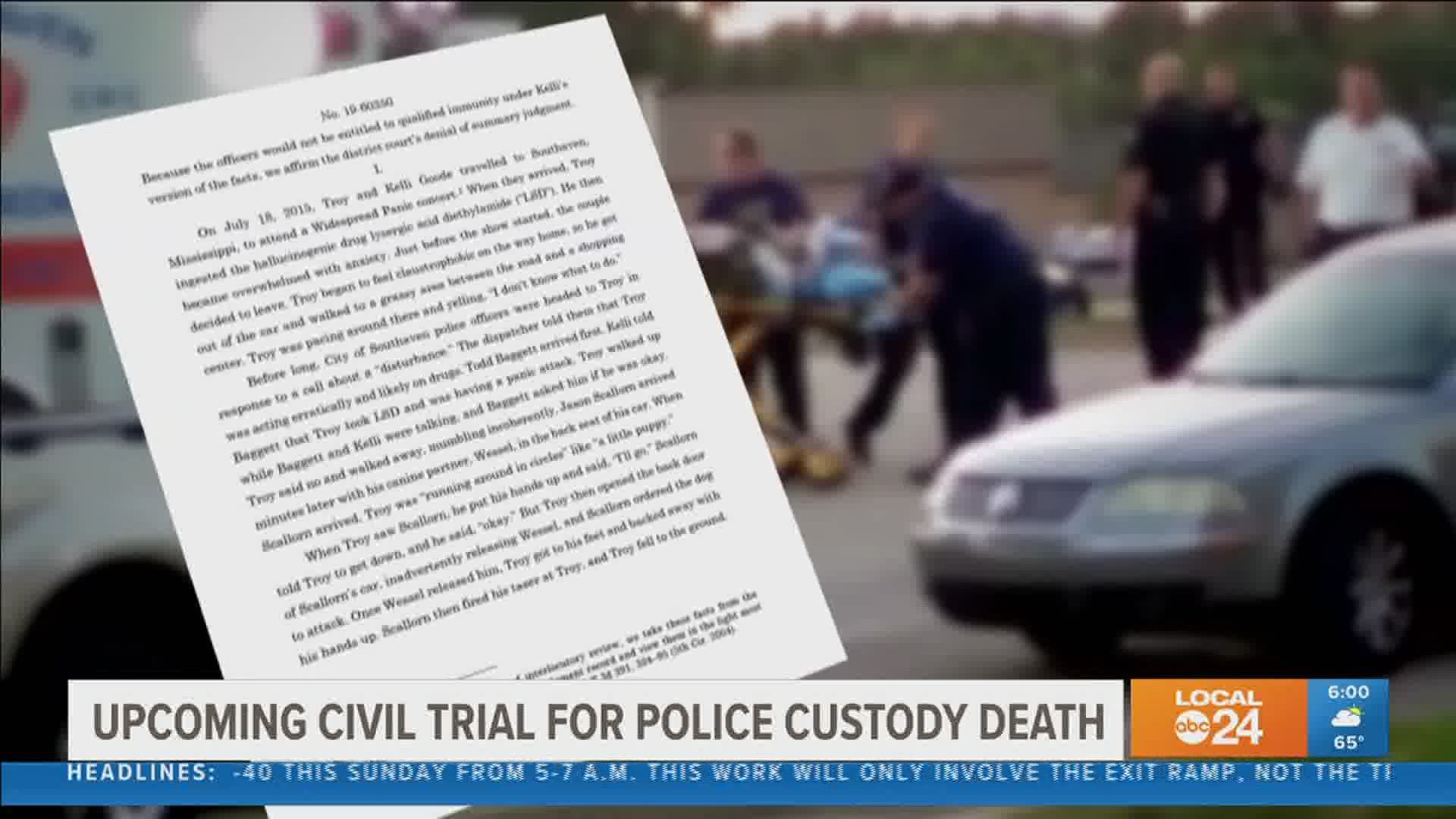 MEMPHIS, Tenn. — While all eyes are on the Derek Chauvin trial for the death of George Floyd in Minnesota, lawyers in Mississippi are preparing for a different trial involving the death of man in police custody.

The wife of Troy Goode said back in 2015 Southaven police officers used excessive force when they put Goode in the "hogtie" position and he died. A Federal civil trial against the city of Southaven and the police officers involved is set for July.

Friends and family said they have been waiting six years for their day in court.

According to court records, Goode was on drugs when he encountered police after leaving a Widespread Panic concert. Maroon said police went too far when they put him in what's called a prone - or hogtie - position.

"The way I saw Troy struggling against the restraint, I knew there was a problem," said witness David McLaughlin.

McLaughlin was there when police hogtied Goode hands and feet together and emergency workers put him in an ambulance. McLaughlin's son shot cell phone video. An attorney by trade, McLaughlin was so bothered by what he saw, he said he walked up to the EMT and voiced his concern.

According to court records, despite being told Goode had asthma, he was put in the ambulance on a gurney - even though a witness said Goode appeared to be in distress and struggling to breathe.

Once at the hospital, court records said police kept Goode face down in the hogtie position until he quit breathing.

McLaughlin said the hogtie position can make it difficult for some people to breathe, and is known to be dangerous by many in law enforcement.

"It's a dangerous thing when you are potentially going to deprive someone from oxygen," said Maroon.

In the Goode case, when the officers involved tried to get out of being personally sued in the civil case, a judge found, "Hog-tying a non-violent drug affected person in a state of drug-induced psychosis and placing him in the prone position in an extended period of time is objectively unreasonable," and that "Hog-tying Troy violated clearly established law."

The officers involved in Goode case were never criminally charged or disciplined for what happened.

Maroon said a civil trial won't bring his friend back, but he hopes it will prevent this from happening to anyone else.

"I hope this and so many incidents so similar to this end in some sort of police reform," said Maroon. "It's terrible and it's got to change, and something has to change the way we police this country. "

A lawyer representing Southaven did not want to comment on this story or release a statement.