“It was just amazing how in those simple words he was able to share his heart,” said Collierville Police Chief Dale Lane. 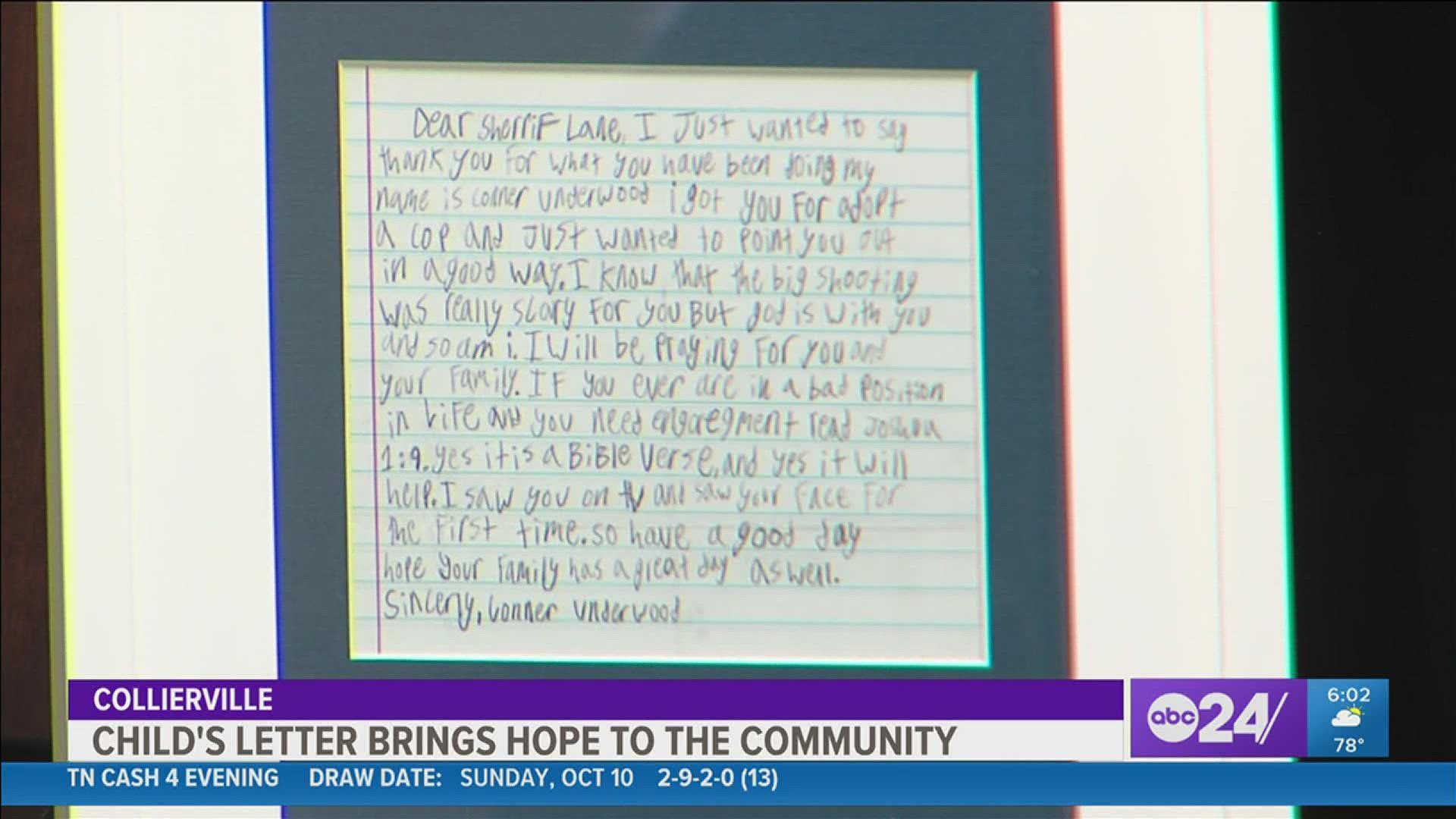 MEMPHIS, Tenn — September 23rd will always be engraved in the minds of Collierville residents.

That is the day of the mass shooting at Kroger.

As a day of tragedy, it is also a day of community as many came together in support.

“I just wanted to say I’m with you and so is God,” said Conner Underwood, Adopt-a-Cop program member.

11-year-old Conner moved to Collierville about three years ago. He joined his church’s Adopt-a-Cop program, partnering with an officer he had never met.

It was Collierville Police Chief Dale Lane. Conner’s introduction to him came in the face of tragedy.

“That shooting at Kroger was pretty scary for everybody even if they didn’t honestly live in Collierville,” said Underwood.

One person was killed, and 12 others injured in the shooting.

Conner knew he had to reach out to Chief Lane.

“When I opened up that letter and saw the handwritten writing… I think there was a line in there that said ‘I know the big shooting was scary, but God was with you and so was I,” said Chief Lane. “It was just amazing how in those simple words he was able to share his heart. That verse that he put in the letter, Joshua 1:9, is one of my favorite verses.”

It is a verse about strength and courage. Chief Lane shared it with the community.

“It’s just gave me hope. Our job at the police department is not just public safety. It’s also to reduce fear. How do you do that? You give people hope. You let people know that tomorrow there’s going to be sunshine coming,” said Chief Lane.

@colliervillepd Chief Dale Lane: "Our job at the police department is not just public safety. It's also to reduce fear. How do you do that? You give people hope."
Chief Lane shares the letter that gave him hope after the Collierville mass shooting at Kroger. pic.twitter.com/aEuUmq6XaT

“I was trying to encourage him. I said, ‘Conner, I’m so proud of you. Please keep praying. It’s working. I need you to pray. I’ll be praying for you.’ Then he said, ‘Let’s pray now,’” said Chief Lane.

Conner is a young man of his word just following faith.

“I knew this would help a lot of people, but I didn’t think it would affect everybody,” said Conner.

He has inspired courage through grief.

“It was just like for me, you pray, ‘God give me strength,’ every day. God gives you people to change, to encourage, and to build up. Man, he just… It blew me away. I just felt like the Lord was just wrapping his arms around me,” said Chief Lane.

It is an embrace of kindness.