Strong reactions from Mid-South members of Congress to Trump supporters rioting at the U.S. Capitol

On social media, Mid-South members of Congress reacted to the shocking scene at the nation’s capital. 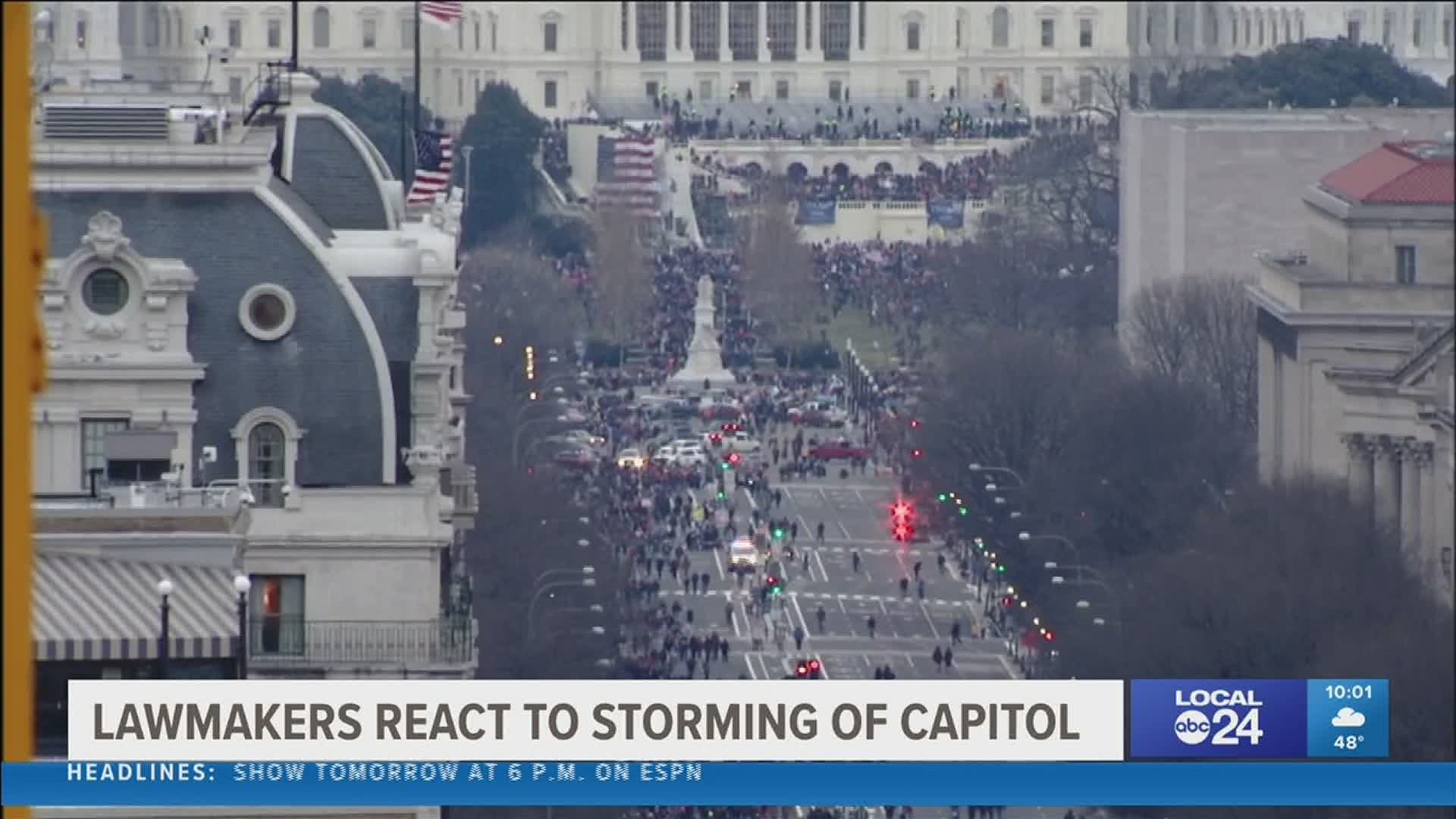 MEMPHIS, Tenn — Tennessee Senators Marsha Blackburn and Bill Hagerty have been vocal about objecting to the Electoral College count and they’ve taken plenty of heat for it. They faced that criticism because every state certified the election results, dozens of lawsuits have been thrown out, and they have not provided any proof whatsoever of any election irregularities to justify objecting to the count.

However, Blackburn announced late Wednesday night she would support the certification of the Electoral College results.

I will vote in support of certifying the electoral college results.

To the protesters who breached the Capitol, Blackburn said, “You are disrupting the democratic process.”

To the protestors that have breached the Capitol building: you are disrupting the democratic process. You should be ashamed of yourself. This is violence. This is a crime. It must stop.

Hagerty said he has always believed in peaceful protest and condemned the violence at the U.S. Capitol.

I have always believed in peaceful protesting. What is happening at the U.S. Capitol right now is not peaceful, this is violence. I condemn it in the strongest terms. We are a nation of laws and this must stop.

Republican Congressman David Kustoff said he would object to the count just hours before the scheduled ceremony. When the pro-Trump crowd stormed the Capitol, he said, "These actions are unacceptable."

Thank you to everyone for reaching out. I am safe. However, these actions are unacceptable. We are a nation of laws, not a nation of violence. Thank you to the U.S. Capitol police for your work at this time.

Democratic Congressman Steve Cohen said he has been "foreseeing this for months" and the President is not putting America first.

I’ve been foreseeing this for months. Post was last week. Trump has been egging this on for months. And he won’t stop. He is not acting as President of the United States he’s acting as a sick narcissistic hurt and wounded loser.Not putting America first putting himself first. Sad https://t.co/7nKDe01ZOR

Thank you for the messages of concern. My staff & I are safe. Whatever frustrations any American may have, violence & destruction in the US Capitol, the seat of our democratic government, is unacceptable. I'm grateful for @CapitolPolice & those working to stabilize the situation.

To everyone who has asked, I am safe.

I thank the brave men and women of the U.S. Capitol Police and federal law enforcement for their work to bring this lawlessness and violence in the Capitol building to an end.

Democratic Congressman Bennie Thompson said in a statement the riot at the nation's capital was "domestic terrorism and armed insurrection."

These thugs have no respect for our democracy.

"The events of today are the inevitable result of the tyrannical and idiotic leadership of Donald Trump," Thompson said.  "It is domestic terrorism and armed insurrection. This possibly would not have happened if Senate Republicans stepped up to the plate and removed their despicable leader. He needs to just leave and never come back. Trump fed this monster with his vile and dangerous talk. As a country, it is time to accept that Joe Biden will be the 46th President of the United States of America and move on."

He needs to just leave and never come back. Trump fed this monster with his vile and dangerous talk. As a country, it is time to accept that Joe Biden will be the 46th President of the United States of America and move on.

Arkansas Republican Senators Tom Cotton and John Boozman both said the violence and destruction needs to stop and both will vote in favor of the count.

Violence and anarchy are unacceptable. We are a nation of laws.

This needs to end now. https://t.co/zyrFUFYZm1

The violence and destruction taking place at the Capitol are unacceptable and must cease.