Hector Espino Martinez is charged with cockfighting and more, and Memphis Animal Services is in desperate need of help. 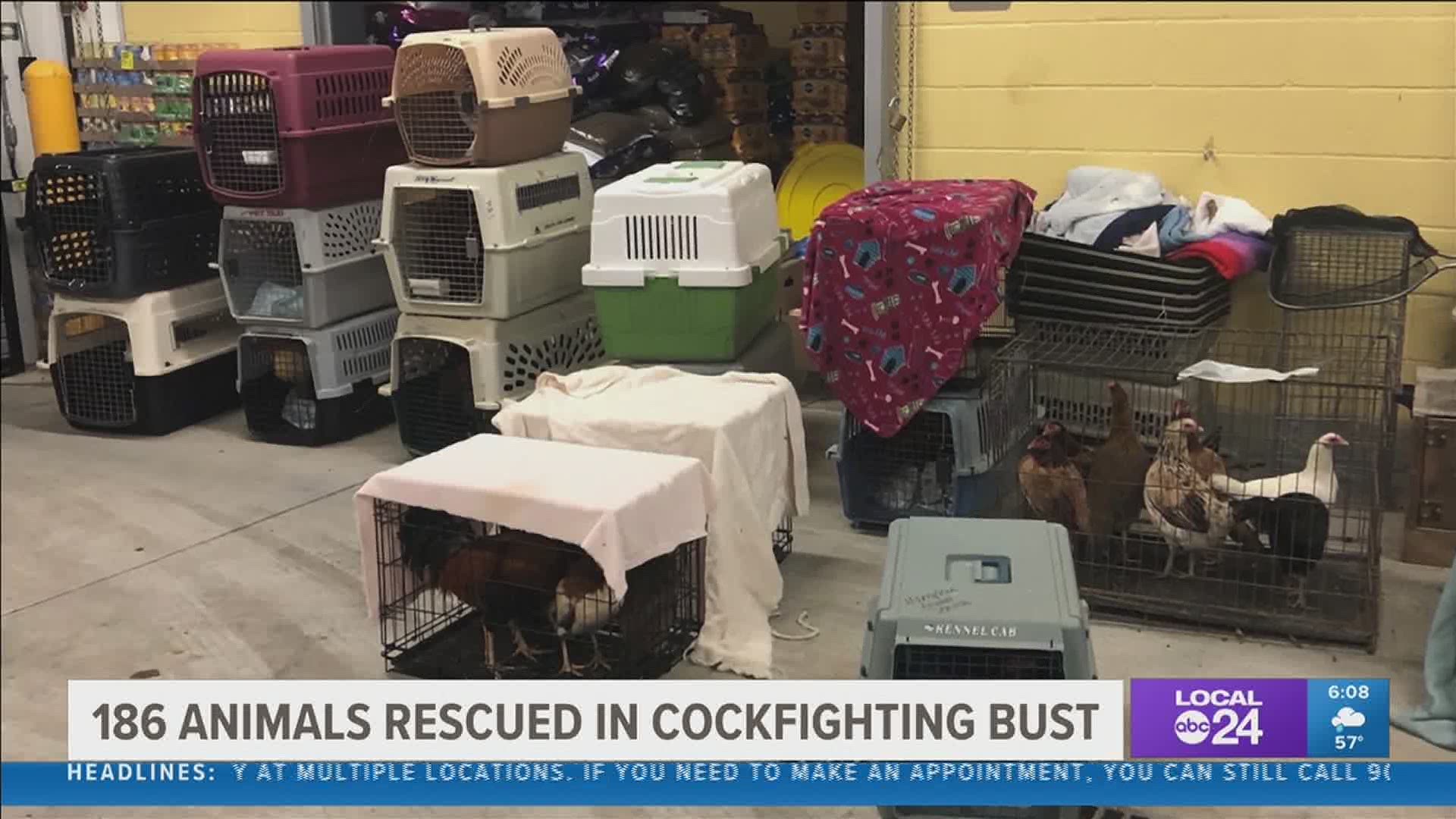 MEMPHIS, Tenn. — One man has been charged and Memphis Animal Services (MAS) is in desperate need of fosters after a huge cockfighting bust. Nearly 200 animals, including birds, dogs, and a cat, were rescued.

Memphis Police, assisted by MAS, responded to an animal cruelty call about 5:00 p.m. Thursday at a home in the 4000 block of Elliston Road, not far from Getwell.

According to the police report, before the bust, detectives found two dead roosters in lots backing up to the property, and several broken eggs that were thrown over the fence.

Detectives said they had to force their way into the home after no one answered the door. There, they found cockfighting paraphernalia such as gaffs, penicillin, syringes, and more in a back bedroom. In two trailers in the background, detectives found medications, a scale, a band castrator, rooster boxing gloves, wound washes, and curad. 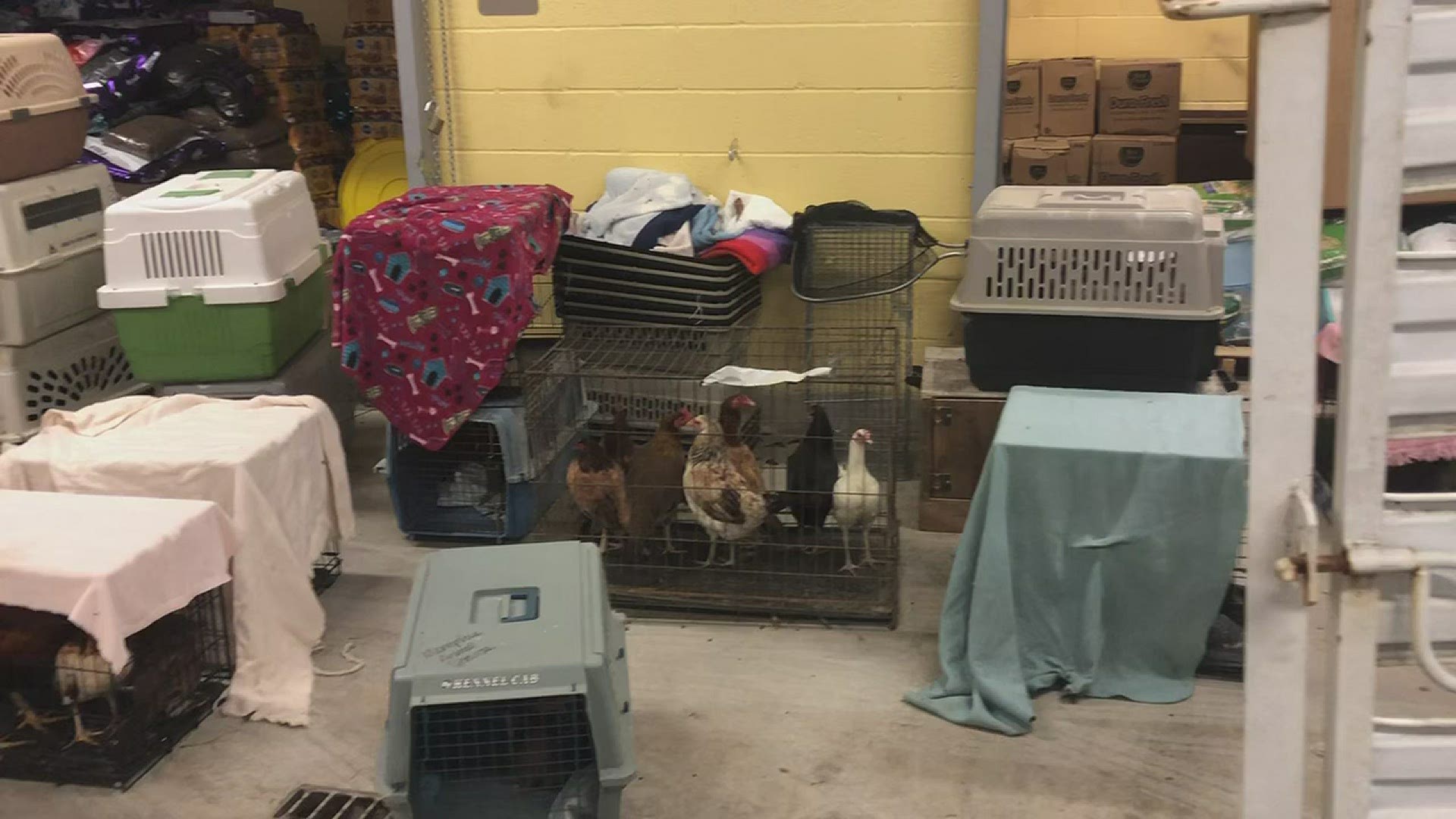 Memphis Animal Services took 174 roosters and hens, 11 dogs, and 1 cat into custody, for a total of 185 animals. The police reports said the dogs were underweight and left with dirty water.

According to the police report, a woman showed up to pick up her son while officers were at the scene. He said her ex-husband Hector Espino Martinez lived there and owned several roosters. He arrived while detectives were still there, and was arrested.

Memphis Animal Services says it “cannot yet speculate on what the outcomes of the chickens will be—that determination will be made by veterinarians and the court. We’ve reached out to state and national agencies for evaluation and placement assistance.”

MAS says because of the huge number of birds being housed in cat and dog areas, they are in need of people who can foster and or adopt other animals at the shelter, especially medium/large adult dogs.

Pugh said taking in all those animals has put a strain on the staff and facility.

"Our shelter is not built to be bird heavy, its built for dogs and cats," said Pugh, "To say we were prepared for this, even knowing a little bit in advance it was going to happen,  there is just no way to prepare for that level of intake. "

"It is wonderful to see MAS and MPD working jointly to protect the animals and protect the citizens," said Cindy Marx Kraus, animal activist.

Right now cockfighting is just a misdemeanor, but a new law under consideration in Nashville would increase the charges to a felony. Something Marx Kraus has supported for years.

"Getting it from a misdemeanor to a felony has always been the big step. We couldn't get it passed. The fact that it has made it this far is wonderful," said Marx Kraus.

"I think what has happened in the past 24 hours here in Memphis is further proof why this increased penalty structure is something we need desperately in our state," said Pugh.

For those interested in fostering: fill out the MAS dog foster application HERE.

Then email mas@memphistn.gov to make an appointment to meet potential foster dogs.

All dog and cat adoptions will be just $20 for anyone who makes an appointment by Sunday, March 7.

If you run a rescue, MAS is in need of rescue partners. Learn more HERE.