Tennessee and Arkansas's governors, as well as Mid-South lawmakers and Memphis' mayor, are reacting to the shutdown of the bridge and what it means for the area. 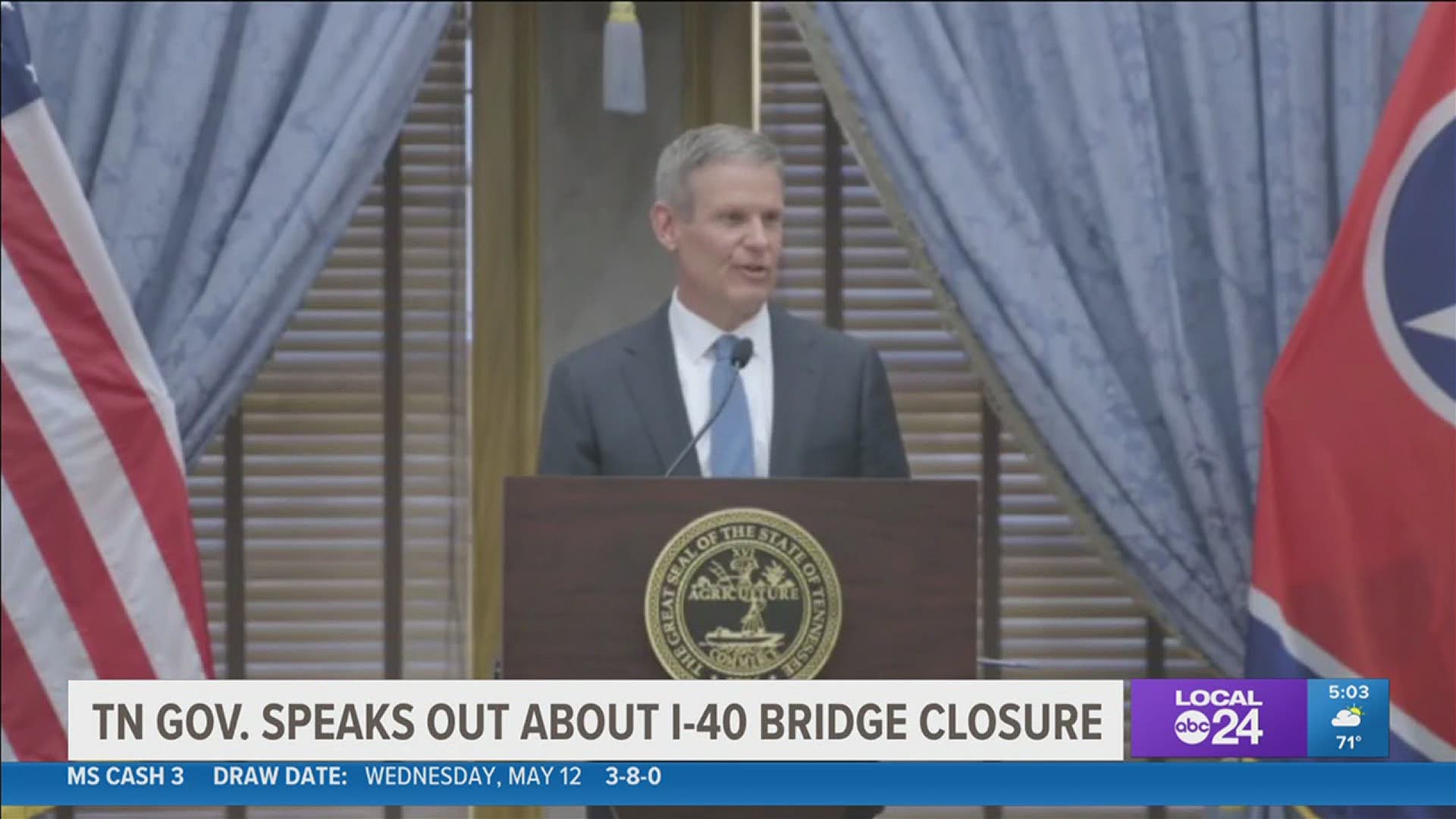 MEMPHIS, Tenn. — Mid-South leaders, including Tennessee Governor Bill Lee and Arkansas Governor Asa Hutchinson, are speaking out about the “crack” in the I-40 Hernando de Soto bridge spanning the Mississippi River in Memphis.

During an event touting a new Anti-human trafficking program, Gov. Lee was asked about the bridge and upcoming repairs.

"One thing we've learned is that clearly investment in infrastructure in this country are needed, and infrastructure is roads and bridges, and that’s what we need to be spending the dollars that are coming from the federal government eventually for... that would be true for that bridge as well. I’m also pleased that the process works. We have a regular inspection process between Arkansas and Tennessee, for that particular bridge, and it was that inspection process that actually revealed the crack before it became an incident,” Lee said. He went on to say that Tennessee will be, in part, responsible for the repair of the bridge.

Gov. Hutchinson’s office released this statement to Local 24 News: “The engineering teams are making progress on assessing the bridge damage and determining the extent and timeframe for repairs. I am hopeful that a temporary repair solution will be an option so that traffic may resume. The Departments of Transportation from both Tennessee and Arkansas are working closely together and will likely have more specific information from the engineers tomorrow. The Coast Guard will also be evaluating when barge traffic under the bridge can resume.”

Memphis Mayor Jim Strickland also released a statement Thursday, saying: “TDOT is the lead agency in this operation, and the City of Memphis stands ready to further help in any way we can. Our administration has been in constant communication with state and federal officials since the discovery of a fracture on the I-40 bridge. As is stands, traffic is moving around the city smoothly, but residents and visitors may encounter slow moving traffic in some areas. The I-40 bridge is extremely important to our region and the nation as it a major artery for interstate and river commerce. Please be assured that all appropriate agencies are working to restore the bridge as quickly as possible.”

Shelby County Mayor Lee Harris tweeted Thursday: "This is the time to have a conversation about fixing what's broken. It's also the perfect time to talk about how we might build back better, make new investments in infrastructure and, yes, consider a third bridge."

U.S. Senator John Boozman of Arkansas, a member of the Senate Appropriations Committee, urged U.S. Department of Transportation leaders to support efforts to safely and efficiently repair the bridge Thursday.

“We’ve actually had to close the bridge. This is a very high trafficked corridor,” Boozman said. “It really is high stakes.”

Wednesday, U.S. Senator Bill Hagerty of Tennessee tweeted: "Just spoke with @TDOTCommish to receive an update on the closure of the I-40 bridge in Memphis, impacting not only road traffic but waterway traffic as well. I told @myTDOT that my door is open, & I’m here to assist with getting this critical infrastructure repaired and reopened."

Friday, Hagerty updated with this tweet: "Hosted a call today w/ @MarshaBlackburn, @JohnBoozman, & @SenTomCotton to convey to @SecretaryPete the urgency of repairing the I-40 bridge in Memphis. River traffic has reopened. I continue to receive updates from @myTDOT as we all work together 2 reopen this major thoroughfare."

Tuesday after the issue was discovered, Rep. Steve Cohen issued the following statement: “It’s fortunate that routine inspection averted a potential disaster, but the state of our crumbling infrastructure is deeply troubling and the closure of a major thruway will negatively affect us both here in Memphis and around the country, which depends on us as a national connection hub. I am closely monitoring the maintenance of this bridge, and I look forward to working in a bipartisan fashion with my colleagues in Arkansas and Tennessee to ensure that provisions to repair and improve the I-40 bridge are included in President Biden’s American Jobs Plan.”